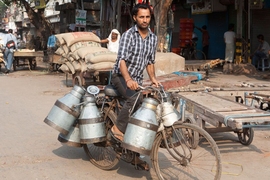 Caption:
A man delivers pails of fresh milk to customers in rural India.

India is the world’s leading milk producer, with many of its people relying on milk as a primary source of income. Indian dairies buy milk from local farmers at village collection centers, and then sell the milk or use it to make dairy products.

But with rural India’s limited electric grid, often available for only several hours daily, keeping milk fresh — it must be refrigerated within a few hours of milking — becomes very difficult. Many dairies use expensive diesel generators for refrigeration, or risk high percentages of spoiled product: Of the roughly 130 million tons of milk produced by India each year, millions of tons go to waste or reach the market as low-quality dairy products that pose safety threats. All this also reduces the income of Indian farmers

Now MIT startup Promethean Power is bringing India milk-chillers that quickly drop the temperature of milk to reduce bacterial growth, even without electricity. Powering the chillers is a novel thermal battery that stores thermal energy when the grid’s available, and releases the energy without need of electricity. So far, Promethean has installed about 100 chillers for top dairies around India.

“Milk for many Indian farmers is literally like liquid cash,” says Promethean co-founder and chief technology officer Sorin Grama SM ’06. “An entire family may live off the money they make from milk. Each of our systems allows 20 to 30 farming families to generate a steady income by selling a portion of their milk to dairy processors.”

Promethean systems are set up by dairies in collection stations, where farmers can bring milk within half an hour after milking a cow. “This also dramatically improves the quality of milk collected, which improves the product for Indian consumers,” Grama says.

On the dairy-processor side, the system drops operating costs, because dairies no longer need to buy and transport diesel fuel to villages. Additionally, dairies can gather milk from remote villages that hadn’t had collection routes before. “Overall it offers a lot of advantages for all stakeholders — dairy processors, farmers, dairy consumers,” Grama says.

The system’s thermal battery — co-invented by Grama after he launched Promethean at MIT — is not a battery in the traditional sense, but a tank that contains two types of materials: a phase-changing material (PCM) that freezes and liquefies inside a series of tubes, submersed in a heat-transfer fluid (HTF) that never freezes. The battery is attached to a refrigeration compressor and a 3-foot high, stainless steel heat exchanger that rapidly chills milk that’s poured over the exchanger’s surface.

“We call it a battery, because we treat it in the same way as an electrical battery: There’s a charging process and a discharge process to store energy for later use,” Grama says.

In the battery’s “charging” process, using grid electricity, the HTF is cooled by the compressor to a temperature that allows the PCM inside the tubes to freeze, and therefore absorb huge amounts of thermal energy. The thermal energy later released from the melting PCM, as it changes from solid to liquid, is captured by the HTF and circulated around the custom heat exchanger. Cold energy is essentially stored in the battery and released to cool and preserve milk.

Milk is poured over the cylindrical heat exchanger and collected in a basin at the bottom. By the time the milk drips from the top of the cylinder to its basin, it receives a “thermal shock” that instantly cools it from 35 to 4 degrees Celsius.

The battery takes about five hours to fully charge and the system can be used to cool up to 1,000 liters of raw milk per day. Chilled milk is stored inside an insulated tank for pick-up by dairies.

Thinking outside the ‘solar window’

Founding Promethean was a seven-year journey, complete with a few dramatic transitions. It started as a student project at MIT, when Grama was enrolled in the System Design and Management program.

Grama joined some students who were developing a solar microgenerator for developing countries. This system, constructed from ordinary car parts, used an array of mirrors that would electromechanically track the sun and focus that energy to boil a fluid refrigerant. This produced vapor that expanded through a rotary turbine, yielding mechanical energy to spin a generator.

Initially, Grama and White wanted to develop the solar-power generator for the Indian market. But during a market assessment trip to India, they discovered the country’s milk-refrigeration issue — and realized solar generator would not solve this problem.

In late 2007, after Grama graduated from MIT, he and White started Promethean and developed their new milk-chiller technology from scratch to address this specific need. In launching Promethean, the team went through the MIT Venture Mentoring Service, using it as a sounding board for business issues. “Having that group of people to force us to look at certain things, and push us and challenge us on certain things, was useful,” Grama says.

At first, they developed a solar-powered milk-chiller. But solar power is only useful during daylight hours. “Milk chilling occurs outside that ‘solar window,’ usually during early morning or early evening,” Grama says.

In 2011, Promethean began developing a thermal battery to help store the solar energy. Eventually, however, the company jettisoned the solar component — which was too expensive and impractical for Indian farmers — and built an entire chilling system around the thermal battery. “What rose from the ashes of all those mistakes was this thermal battery, which proved to be the real solution,” Grama says.

Renting a vacant warehouse in Cambridge, Massachusetts, Promethean built its new system from scratch — and soon recruited fellow MIT spinouts Alteros and OsComp, and others, to prototype their own clean-tech inventions. (This startup collaborative became the origins of the now-popular Greentown Labs in Somerville, Massachusetts, which is Promethean’s business headquarters, although the chillers are manufactured in Pune, India.)

Promethean received its first large commercial order in early 2013, and has seen steady business since. In the future, Promethean may bring its systems to Southeast Asian countries, as well as Africa and Latin America. But the primary focus is on growing the company in India. “First, I’d like to see a self-sustaining local business in India,” Grama says. “If that goes well, we can think of seeding companies like this in other parts of the world.”

Jason Margolis of PRI’s The World chronicles how MIT alumnus Sorin Grama’s first attempt at a startup paved the way for him to found Promethean Power Systems, which produces milk chillers for regions of India with unreliable power. Margolis notes that this fall Grama will serve as an entrepreneur-in-residence at MIT with a focus on the developing world.