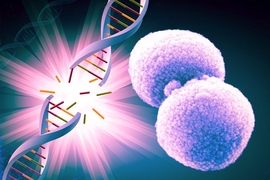 A bacterium that is the most common cause of pneumonia — a leading cause of death worldwide — can damage DNA in lung cells, a new study has shown.

Researchers from the Singapore-MIT Alliance for Research and Technology (SMART) demonstrated that hydrogen peroxide secreted by some strains of Streptococcus pneumoniae causes DNA in human lung cells to suffer double-strand breaks. Such breaks sever the DNA, creating broken ends that are highly toxic to cells, leading to cell suicide, or apoptosis.

“Secretion of hydrogen peroxide damages the DNA of lung cells, crippling the lungs' defenses against invasion and making it easier for the bacteria to get into the bloodstream,” says Bevin Engelward, the paper’s senior author and a professor of biological engineering at MIT.

The discovery, she says, could lead to improved treatment for pneumonia patients by providing a means of measuring a person’s susceptibility to the disease. The study was led by Engelward, an expert in DNA damage and repair, and Vincent Chow, a professor and microbiologist at the National University of Singapore.

The study is published today in the Proceedings of the National Academy of Sciences. The lead author was Prashant Rai, a researcher in the infectious disease group at SMART.

“Hydrogen peroxide is commonly used as a disinfectant because of its ability to kill a wide range of microorganisms,” says Eric Rubin, a professor of immunology and infectious diseases at Harvard University who was not involved in the research. “[This study] turn[s] this concept around: It is the microbe, S. pneumoniae, that is using hydrogen peroxide, this time to damage the host.”

Physicians and researchers alike have long known that bacteria can infect people weakened by influenza — and that those infections can be fatal.

“In the 1918 flu pandemic, most deaths were caused by secondary bacterial pneumonia, especially infection with S. pneumoniae,” Chow says. “There is autopsy evidence to show that it wasn’t influenza that directly killed patients, but mortality was mainly due to the secondary bacterial infection that followed. That was what really motivated our lab to study S. pneumoniae: It’s clearly tied to flu pathogenicity. We wanted to investigate if S. pneumoniae and its products, such as hydrogen peroxide, could inflict damage on DNA of the infected host.”

Until now, however, DNA double-strand breaks were not among the harms thought to be caused by S. pneumoniae.

“There have been previous reports [of DNA damage] for certain bacteria, but nobody expects DNA damage to play a role in an acute infection like pneumonia,” Rai says.

The team used fluorescent dyes to locate DNA-repair foci, phosphorylated histone proteins that form at the site of DNA double-strand breaks and are thought to play a role in repairing DNA damage. After testing three strains of S. pneumoniae, the team found that the presence of the bacteria resulted in a significant increase in the frequency of double-strand breaks, and that this DNA damage caused apoptosis.

“It is an important piece of work that extends our knowledge of how bacterial infection can cause lung injury,” says David Dockrell, a professor of infectious diseases at Sheffield University who was not involved in the research.

Too much hydrogen peroxide

The human body produces hydrogen peroxide at sites of inflammation: If the body senses an infection, it activates an innate inflammatory response that includes immune cells, such as macrophages and neutrophils. “What they produce are reactive oxygen and nitrogen species, which includes an increase in hydrogen peroxide — really toxic chemicals meant to beat down the infective agent,” Engelward says.

“If the bacteria itself produces hydrogen peroxide, maybe it pushes past the threshold that the host can tolerate,” Rai adds.

Moreover, the inflammatory response might not work against hydrogen peroxide-producing bacteria. “S. pneumoniae strains that secrete hydrogen peroxide are predicted to be resistant to our body’s reactive oxygen species, used in an attempt to clear the infection, since the bacteria already tolerates its own reactive oxygen species,” Engelward says.

“The immune system’s ability to create reactive oxygen species may not be very helpful against certain strains of S. pneumoniae. It is possible that it might be hurting rather than helping,” Rai says.

The discovery that strains of S. pneumoniae cause DNA damage could open pathways to improved triage and treatment, based on the specific combination of patient and bacterial strain.

“It’s known that there is variability in DNA-repair capacity among people: Some people repair their DNA better than others,” Engelward says.

Combined with these latest research results, that suggests that a person with lower capacity for DNA repair might be more susceptible to certain types of pneumonia.

Engelward’s lab and that of Leona Samson, a professor of biology and biological engineering at MIT, have been working on technologies that can measure a person’s ability to repair DNA damage. Technologies already exist to determine which strain of pneumonia a person is infected with. But such technologies, paired with the ability to measure a person’s DNA-repair capacity, could one day allow hospitals to determine, early on, just how bad a particular pneumonia infection will be for a particular patient. Being able to predict who is most susceptible to fatal pneumonia could ultimately save lives.