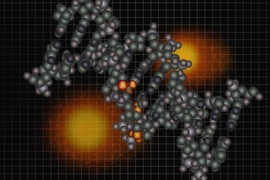 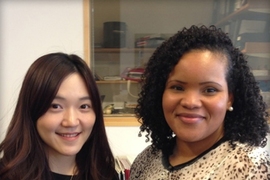 Thousands of consumer products — including cosmetics, sunscreens, and clothing — contain nanoparticles added by manufacturers to improve texture, kill microbes, or enhance shelf life, among other purposes. However, several studies have shown that some of these engineered nanoparticles can be toxic to cells.

A new study from MIT and the Harvard School of Public Health (HSPH) suggests that certain nanoparticles can also harm DNA. This research was led by Bevin Engelward, a professor of biological engineering at MIT, and associate professor Philip Demokritou, director of HSPH’s Center for Nanotechnology and Nanotoxicology.

The researchers found that zinc oxide nanoparticles, often used in sunscreen to block ultraviolet rays, significantly damage DNA. Nanoscale silver, which has been added to toys, toothpaste, clothing, and other products for its antimicrobial properties, also produces substantial DNA damage, they found.

The findings, published in a recent issue of the journal ACS Nano, relied on a high-speed screening technology to analyze DNA damage. This approach makes it possible to study nanoparticles’ potential hazards at a much faster rate and larger scale than previously possible.

The Food and Drug Administration does not require manufacturers to test nanoscale additives for a given material if the bulk material has already been shown to be safe. However, there is evidence that the nanoparticle form of some of these materials may be unsafe: Due to their immensely small size, these materials may exhibit different physical, chemical, and biological properties, and penetrate cells more easily.

“The problem is that if a nanoparticle is made out of something that’s deemed a safe material, it’s typically considered safe. There are people out there who are concerned, but it’s a tough battle because once these things go into production, it’s very hard to undo,” Engelward says.

The researchers focused on five types of engineered nanoparticles — silver, zinc oxide, iron oxide, cerium oxide, and silicon dioxide (also known as amorphous silica) — that are used industrially. Some of these nanomaterials can produce free radicals called reactive oxygen species, which can alter DNA. Once these particles get into the body, they may accumulate in tissues, causing more damage.

“It’s essential to monitor and evaluate the toxicity or the hazards that these materials may possess. There are so many variations of these materials, in different sizes and shapes, and they’re being incorporated into so many products,” says Christa Watson, a postdoc at HSPH and the paper’s lead author. “This toxicological screening platform gives us a standardized method to assess the engineered nanomaterials that are being developed and used at present.”

The researchers hope that this screening technology could also be used to help design safer forms of nanoparticles; they are already working with partners in industry to engineer safer UV-blocking nanoparticles. Demokritou’s lab recently showed that coating zinc oxide particles with a nanothin layer of amorphous silica can reduce the particles’ ability to damage DNA.

Until now, most studies of nanoparticle toxicity have focused on cell survival after exposure. Very few have examined genotoxicity, or the ability to damage DNA — a phenomenon that may not necessarily kill a cell, but one that can lead to cancerous mutations if the damage is not repaired.

A common way to study DNA damage in cells is the so-called “comet assay,” named for the comet-shaped smear that damaged DNA forms during the test. The procedure is based on gel electrophoresis, a test in which an electric field is applied to DNA placed in a matrix, forcing the DNA to move across the gel. During electrophoresis, damaged DNA travels farther than undamaged DNA, producing a comet-tail shape.

Measuring how far the DNA can travel reveals how much DNA damage has occurred. This procedure is very sensitive, but also very tedious.

In 2010, Engelward and MIT professor Sangeeta Bhatia developed a much more rapid version of the comet assay, known as the CometChip. Using microfabrication technology, single cells can be trapped in tiny microwells within the matrix. This approach makes it possible to process as many as 1,000 samples in the time that it used to take to process just 30 samples — allowing researchers to test dozens of experimental conditions at a time, which can be analyzed using imaging software.

Wolfgang Kreyling, an epidemiologist at the German Research Center for Environmental Health who was not involved in the study, says this technology should help toxicologists catch up to the rapid rate of deployment of engineered nanoparticles (ENPs).

“High-throughput screening platforms are desperately needed,” Kreyling says. “The proposed approach will be not only an important tool for nanotoxicologists developing high-throughput screening strategies for the assessment of possible adverse health effects associated with ENPs, but also of great importance for material scientists working on the development of novel ENPs and safer-by-design approaches.”

Using the CometChip, the MIT and HSPH researchers tested the nanoparticles’ effects on two types of cells that are commonly used for toxicity studies: a type of human blood cells called lymphoblastoids, and an immortalized line of Chinese hamster ovary cells.

Zinc oxide and silver produced the greatest DNA damage in both cell lines. At a concentration of 10 micrograms per milliliter — a dose not high enough to kill all of the cells — these generated a large number of single-stranded DNA breaks.

How much is too much?

More studies are needed to determine how much exposure to metal oxide nanoparticles could be unsafe for humans, the researchers say.

“The biggest challenge we have as people concerned with exposure biology is deciding when is something dangerous and when is it not, based on the dose level. At low levels, probably these things are fine,” Engelward says. “The question is: At what level does it become problematic, and how long will it take for us to notice?”

One of the areas of greatest concern is occupational exposure to nanoparticles, the researchers say. Children and fetuses are also potentially at greater risk because their cells divide more often, making them more vulnerable to DNA damage.

The most common routes that engineered nanoparticles follow into the body are through the skin, lungs, and stomach, so the researchers are now investigating nanoparticle genotoxicity on those cell types. They are also studying the effects of other engineered nanoparticles, including metal oxides used in printer and photocopier toner, which can become airborne and enter the lungs.