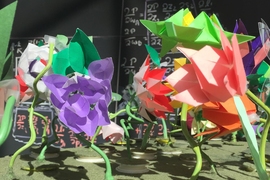 ↓ Download Image
Caption: The Robot Garden, displayed at CSAIL, included plastic, illuminating flowers “planted” on a large board that can be controlled via computer.
Credits: Photo: Brielle Domings/MIT Alumni Association 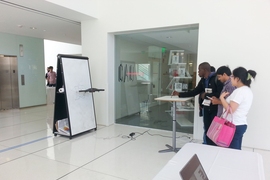 ↓ Download Image
Caption: Students in the MIT Media Lab try out a pen-controlled "writing" drone. When users trace lines on a desk with an inkless pen, the drone will duplicate those lines on a distant whiteboard. This is done with cameras tracking the pen and drone, and software synching the two patterns.
Credits: Photo: Rob Matheson/MIT

Caption:
The Robot Garden, displayed at CSAIL, included plastic, illuminating flowers “planted” on a large board that can be controlled via computer.
Credits:
Photo: Brielle Domings/MIT Alumni Association

Caption:
Students in the MIT Media Lab try out a pen-controlled "writing" drone. When users trace lines on a desk with an inkless pen, the drone will duplicate those lines on a distant whiteboard. This is done with cameras tracking the pen and drone, and software synching the two patterns.
Credits:
Photo: Rob Matheson/MIT

In the MIT Media Lab on Thursday afternoon, a crowd gathered around PhD student Sang Won Leigh, who controlled a “writing” drone remotely with an inkless pen. Whatever lines Leigh (and excited volunteers) traced on a desk, the quadrocopter would duplicate with an attached black marker on a whiteboard a few yards away.

Behind the scenes, a line of cameras tracked the drone and pen, and software synched the two patterns, Leigh explained. The technology could lead, among other things, to a future of airborne furniture, he added: “Imagine, for example, you have a lamp on [a drone]. Cameras could track your movement and the lamp would follow.”

The demonstration was a small part of Thursday’s immense “Inside Kendall Square” program, hosted by HUBweek, which offered crowds a glimpse of the scientific and technological innovations, and various initiatives, springing up from MIT and its neighborhood.

Several events were also hosted by MIT’s four-day Solve conference, which brought leaders together across disciplines to explore major social and environmental challenges in health care, energy, the environment, food and water supply, education, civil infrastructure, and the economy.

The aim was to “demystify” the innovative work going on in Kendall Square, said Danielle Duplin, a HUBweek producer who organized Thursday’s program. “We want to connect people with the brilliance of Kendall Square,” she said.

In the Solve Pavilion, erected in MIT’s North Court adjacent to the Stata Center and Koch Institute, the Institute hosted a conference with MIT professors and other speakers who delivered brief presentations about initiatives they’ve launched to address inequality in many forms.

The aim of “Dissolve Unconference: dissolving the structures of inequality and driving systemic change,” was to bring inequality researchers together to network for future collaboration, host Ian Condry, a professor of anthropology, said in his opening remarks.

“Our world is being ravaged by all kinds of inequality — income inequality, racial inequality, gender inequality,” he said. “My belief is that the only way we’re going to make any headway on these inequalities is by working together by finding alliances across disciplines, across issues, and really building a cultural movement that can dissolve the structures of inequality.”

To battle inequality, Condry recently started the Billionaire Action Lab at MIT, which takes an “anthropological approach” to inequality, he said, by using ethnographic fieldwork and collaborating with local communities to fix inequality problems.

But other speakers demonstrated that inequality could also be measured in, say, the ability to “hack” medical technology. Jose Gomez-Marquez, a researcher in the Little Devices group at MIT, discussed his group’s efforts to provide everyone, tech-savvy or not, with “do-it-yourself” (DIY) medical devices — mostly in the developing world.

“We’re aggregating all these types of diagnostics, making construction sets out of them, so doctors in West Africa, and wherever there’s a burning epidemic, can make it on their own,” Gomez-Marquez said.

Other conferences were: “The Art of Mindfulness and Why it Matters” (hosted by Solve); “From the Neolithic Era to the Apocalypse: How to Prepare for the Future by Studying the Past” (hosted by MIT); “On Beauty: Emily Eveleth and David Tester” (hosted by Broad Institute); and “Creating Something Out of Nothing: Voices that Need to be Heard” (hosted by TheEditorial.com).

Throughout the day, people could drop by several MIT labs, as well as businesses and booths around Kendall Square, to check out some of today’s latest inventions.

At the Fab Lab Hub Hand-A-Thon at the Google offices, people assembled 3D-printed parts into prosthetic hands. A digital health fair, organized by Massachusetts General Hospital at 100 Technology Square, let participants try out the latest wearables and mobile devices — from some 30 local companies — that aim to transform healthcare.

At the Whitehead Institute, six roundtable discussions explored, in-depth, some of the research being done by the institute — such as battling tumors and analyzing protein folding. Meanwhile, the Koch Institute erected cardboard cutouts of professors and students accompanied by blurbs about their research. Pfizer’s labs and the MIT List Visual Arts Center also held open houses.

Among the new projects launched by students at the Computer Science and Artificial Intelligence Laboratory (CSAIL) was a “Robot Garden,” where plastic, illuminating flowers were “planted” on platforms on a large board. When an electronic input, such as music, is played into one flower, that flower will light up and redistribute that signal with the rest of the flowers. The whole garden can be controlled via computer.

Drawing a big crowd in the Kendall Plaza were booths set up by the urban beekeeping company Best Bees, where people could build “bee hotels” and learn how to keep their own hive. Founded in 2010, the Boston-based company has set up and maintained around 800 beehives — each around 3 feet tall and 2 feet wide — for people living in the city and beyond, while also developing bee antibiotics.

Increased beekeeping is essential today worldwide, said employee Roman Pham, as around 80 percent of all fruit, vegetable, and seed crops depend on bees — yet bee populations are continuing to decline. “One-third of everything you eat is influenced by bees,” Pham said. “They’re very important.”