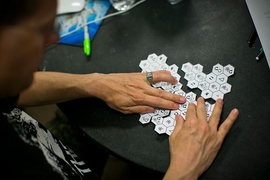 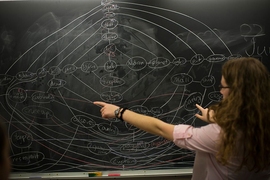 ↓ Download Image
Caption: A member of Team PuzzFeed maps out a puzzle. Many puzzles have multiple parts or stages.
Credits: Dominick Reuter 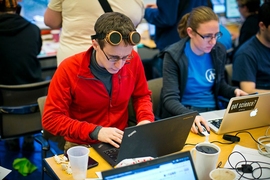 ↓ Download Image
Caption: A member of the team running this year's hunt, at work in headquarters. His goggles are in keeping with this year's theme of "20,000 Puzzles Under the Sea."
Credits: Dominick Reuter 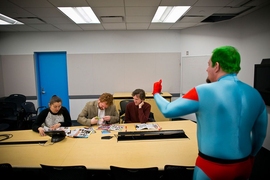 ↓ Download Image
Caption: Matthew S. Cain '02, in character as Captain Planet, leads an interactive challenge. Participants were asked to transform tabloid images into a message of hope for the planet.
Credits: Dominick Reuter 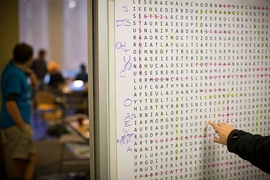 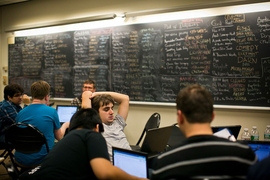 ↓ Download Image
Caption: PuzzFeed member James Wiken '13 (center) and his teammates work away; behind them, solved puzzles are listed on the blackboard.
Credits: Dominick Reuter 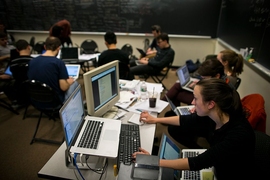 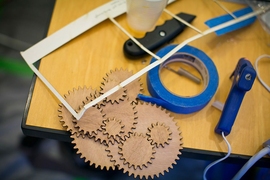 ↓ Download Image
Caption: Some craftsmanship is required: one of several physical puzzles in this year's Mystery Hunt.
Credits: Dominick Reuter 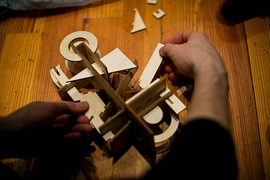 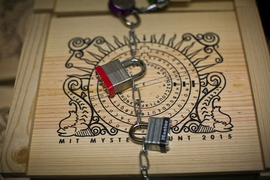 ↓ Download Image
Caption: One round of puzzles came in a treasure chest like this one, filled with coins, dice, a treasure map, and other physical puzzles. The chain of locks on the outside is also a puzzle.
Credits: Dominick Reuter

Caption:
A Mystery Hunt participant arranges parts of a puzzle. The 2015 hunt contained more than 160 puzzles, ranging from crosswords to treasure maps to tasks like charades.
Credits:
Dominick Reuter

Caption:
A member of Team PuzzFeed maps out a puzzle. Many puzzles have multiple parts or stages.
Credits:
Dominick Reuter

Caption:
A member of the team running this year's hunt, at work in headquarters. His goggles are in keeping with this year's theme of "20,000 Puzzles Under the Sea."
Credits:
Dominick Reuter

Caption:
Matthew S. Cain '02, in character as Captain Planet, leads an interactive challenge. Participants were asked to transform tabloid images into a message of hope for the planet.
Credits:
Dominick Reuter

Caption:
PuzzFeed member James Wiken '13 (center) and his teammates work away; behind them, solved puzzles are listed on the blackboard.
Credits:
Dominick Reuter

Caption:
Some craftsmanship is required: one of several physical puzzles in this year's Mystery Hunt.
Credits:
Dominick Reuter

Caption:
One round of puzzles came in a treasure chest like this one, filled with coins, dice, a treasure map, and other physical puzzles. The chain of locks on the outside is also a puzzle.
Credits:
Dominick Reuter

It’s early afternoon on Friday, Jan. 16. On the third floor of MIT’s Building 34, three classrooms are buzzing with excitement. This is the assigned home base for Team PuzzFeed, whose members are clustered at round tables, refreshing their laptop screens impatiently. They’re waiting for 1:17 p.m. — the slated start time for the 2015 MIT Mystery Hunt. “It’s up!” someone shouts, and the team cheers as the first puzzles load online.

The Mystery Hunt has been an MIT tradition since PhD student Brad Schaefer designed the first hunt in 1981. Much of the original design remains today: Teams solve complex puzzles to reveal clues that ultimately lead to a coin hidden somewhere on campus. But since 1981, the hunt has grown in size, with more participants, more puzzles, and more hours required to find the coin. More than 70 teams and 2,200 participants signed up this year. The team that finds the coin first wins the right to create the next year’s hunt.

Two years ago, this honor went to the members of Team PuzzFeed, who won the longest hunt on record — 73 hours. Because they then designed and produced the 2014 hunt, “This is our first time hunting in two years,” says Laura Royden ’13, one of the team leaders. “So people are really excited.”

As soon as the first puzzles go live, PuzzFeed’s assigned classrooms turn into a puzzle-solving factory. In one room, they have food and drinks to sustain their team through the weekend; in another, they’ve set up a makeshift control station to monitor and coordinate the team’s progress. “We have a computer system that we wrote to keep track of the puzzles,” says team member Benjamin O’Connor ’00. This allows the team to “specifically direct people toward the puzzle that needs work,” he adds.

It will be a long couple of days for the team. This year’s hunt contains a total of 158 online puzzles, which are intensely challenging, extremely varied — and often devoid of instructions. They include crosswords, word searches, video and sound clips, computer programming terminals, riddles, cryptic images, and various combinations of these. Some puzzles can only be solved with graduate-level physics and mathematics. Additionally, there are five team-event puzzles (including charades and pub trivia) and eight “runaround challenges,” which involve traveling to different locations to complete a task, such as crafting a collage on demand.

A draw for students, alumni, and others

There are around 100 people on the PuzzFeed team, with areas of expertise ranging from physics to politics to computer science to musical composition. Many team members have traveled from out-of-state to be here; others, unable to come to Cambridge, are communicating with the team online. The Mystery Hunt is open to all interested participants, and not all PuzzFeed members are affiliated with MIT.

But most are MIT alumni, and many are Mystery Hunt veterans, including both Royden and O’Connor (who has hunted with this team since 1999, three years after its creation). Undergraduates who have joined PuzzFeed this year include sophomore Allan Sadun, who was on a smaller team last year, but says he appreciates PuzzFeed’s larger size — which, Sadun says, allows him to focus on the puzzles that interest him most, while entrusting the others to his teammates.

In addition to their human capital, members of Team PuzzFeed have the gift of humor. This becomes clear when the phone in the team’s home base rings, and Teasha Feldman ’14 answers: “Hello, this is PuzzFeed — and we have ‘Eight Pop Culture References That Were Relevant Back in November When We Chose Our Team Name!’” (Comedic phone etiquette is a team tradition — in this case, a puzzle-themed play on the stylized headlines of the website BuzzFeed. PuzzFeed answers nearly every call with another playful headline.)

Unlike some teams, which retain part of their name year to year, this team changes its name for each Mystery Hunt. Two years ago, nobody restricted the length of team names, so this group chose the entire text of the novel “Atlas Shrugged” as its title. “Every time we answered the phone, we’d answer it with the next line of the book,” O’Connor says. “We’d keep reading until they stopped us.”

By 8 p.m. on Friday, the first night of the hunt, PuzzFeed is still hard at work. Team members will usually return to their homes or hotel rooms to rest, Feldman says, although some “engineer” their schedules so they can work while others sleep. “There will be people here solving all 24 hours of the day until someone wins,” she says. “And then, if it’s not us — until we finish.”

Finishing — not winning — is actually the primary goal for many members of PuzzFeed. While Royden and Feldman say that their team is very competitive, the effort of participating in a Mystery Hunt is nothing compared to that of writing and running one. After producing last year’s hunt, many members of PuzzFeed are happy for a break.

By Saturday morning, these altered priorities have led to what Elaina Present ’12 says is unusually low attendance. “I have never seen this before, and this is my fifth hunt with this team,” she says. Erin Rhode ’04, who led the team’s puzzle hunt last year, agrees, saying she’d opted to sleep in that morning: “We’re not trying to win this one,” she emphasizes.

A few buildings away, last year’s winning team is powering through the very effort PuzzFeed wants to avoid — calling various teams with answers, or dressing up as different characters to guide teams through runaround challenges. Producing a hunt is “roughly the same scale as producing a movie — but with a lot smaller budget,” says Iolanthe Chronis ’08, MNG ’10, this year’s Mystery Hunt leader. Every puzzle takes around 30 hours to create, test, and produce; some of Chronis’ teammates have spent up to 40 hours a week for the last year preparing for this weekend.

Every team tries to innovate, Chronis says. Not all teams are as large as PuzzFeed, so Chronis and her team have tried to design a hunt that can engage smaller teams as well. They’ve included a large group of puzzles that are relatively short and simple, and a round of intricate physical puzzles, including coins, dice, and a treasure map. In another novel move, the team will make the online puzzles publicly available after the hunt finishes.

Back in Building 34, PuzzFeed is rapidly approaching its final puzzles. By early Saturday night, the pace seems to pick up. The puzzles are, if anything, more challenging: “Things get progressively harder as it goes,” says team member James Wiken ’13. But with fewer puzzles remaining, more team members can concentrate on each one. “This is what happens at the end of the hunt,” says Seth Bisen-Hersh ’01, who has been with the team since 2006. “Like dominoes, at this point.”

At 12:28 a.m. on Sunday, after more than 36 hours of dedicated work, PuzzFeed has solved everything needed to advance to a series of tasks known as the “final runaround,” which will ultimately reveal the coin’s location. This year, the final runaround consists of games such as “Family Feud” and “Human Pictionary.”

At 2:50 a.m., PuzzFeed begins the final runaround; at 5:02 a.m., Team “Luck, I Am Your Father” discovers the coin, hidden on the first floor of Building 26. Just over three hours later, at 8:23 a.m., Team PuzzFeed completes the Mystery Hunt, coming in fourth place. While 57 teams are able to solve at least one puzzle, only 11 manage to finish the hunt.

At a wrap-up ceremony on Monday afternoon, Chronis and her team present a few teams with awards; PuzzFeed receives the title of “Most Hilarious.” Chronis then signs off as Mystery Hunt leader: “We had an awesome time — hope you did, too.”

The mantle has been handed over. Next January, Team Luck, I Am Your Father will present the 2016 MIT Mystery Hunt. And Team PuzzFeed, with a new name but many familiar faces, will be ready to compete again.

Where were those Mystery Hunt coins found?

Sleepless in Cambridge, they hunt the mystery coin