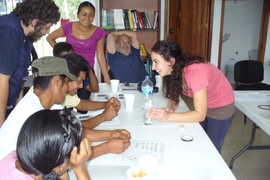 ↓ Download Image
Caption: The MIT team held a series of training sessions for the community operators in the village.
Credits: Photo: Leah Kelley

Caption:
The MIT team held a series of training sessions for the community operators in the village.
Credits:
Photo: Leah Kelley

Deep in the jungles of the Yucatan peninsula, residents of the remote Mexican village of La Mancalona are producing clean drinking water using the power of the sun.

For nearly two years now, members of the community, most of whom are subsistence farmers, have operated and maintained a solar-powered water purification system engineered by researchers at MIT.

The system consists of two solar panels that convert sunlight into electricity; these, in turn, power a set of pumps that push water through semiporous membranes in a filtration process called reverse osmosis. The setup purifies both brackish well water and collected rainwater, producing about 1,000 liters of purified water a day for the 450 residents.

The MIT team had previously demonstrated the technology’s feasibility in the lab and in the field. Now, in a study published in the journal Desalination, they report that residents of La Mancalona have successfully run the solar-powered system, having been trained by MIT researchers to operate and maintain the system. The villagers are paying the community operators for their drinking water at a price they can afford, and one that makes the system self-sustainable.

“We’re using MIT intellect to produce technology systems that are of the highest quality, and we can train people to use them, and change the culture down in these poor communities,” Dubowsky says. “This is a whole new paradigm for providing clean water for people in need.”

In so many words

In 2012, Dubowsky and MIT students and research staff including Amy Bilton began designing and installing the technology, known as a photovoltaic powered reverse osmosis (PVRO); MIT researcher Huda Elasaad was central to training community residents to operate and maintain the system. A local aid organization had identified La Mancalona as a potential site for the system, as the community lacked dependable sources of clean drinking water. The region also receives ample amounts of sunshine — an ideal environment for a solar-powered system.

In installing the system, the MIT team found willing and resourceful helpers in the community.

“When you live in a very rural area, you have to do everything yourself,” Elasaad says. “Farming, if there’s something wrong with your well, you’re the one stuck fixing it, because no one’s going to drive into the jungle to help you. So they were very handy, which made it easy for us to train them.”

The main challenges in this training stemmed from the language barrier: A local aid worker typically would translate the researchers’ instructions in English into Spanish, and then into the Yucatan version of Spanish, and finally to the local indigenous dialect.

“The entire time, you’re just hoping nothing gets lost in translation,” Elasaad says. “The nice thing about technology is, it kind of speaks for itself. You can show with very easy diagrams and hands-on training, right next to them, that turning a valve doesn’t have to be said in so many words — you can just show them.”

Since the PVRO system was installed, the village has been operating it as a business, selling 20-liter bottles of water to residents for 5 pesos — a price that the community agreed upon, and about one-tenth the price of bottled water that is intermittently supplied by a centralized facility an hour’s drive from the village.

At this price, the community reaps a profit of about 49,000 pesos, or $3,600, per year. The community has appointed a committee to manage the incoming funds, setting aside some money for maintenance and repair of the system, and investing the rest back into the community.

“They’re also trying to develop a business plan focused on selling clean water to tourists who come to the local Mayan ruins,” Elasaad says. “So it’s been interesting seeing what they’ve done with this new economy.”

She adds that the residents in La Mancalona have taken ownership of the technology, having been trained to operate it on a day-to-day basis, from changing out ultraviolet lights and filters to testing the water quality and replacing batteries. They also have a list of local suppliers for replacement parts.

Aside from the system’s economic benefits, Elasaad suspects it may also improve the residents’ health — a trend that she hopes to investigate in the future.

“Before, they couldn’t afford clean water, but they could afford soda, which was actually cheaper than bottled water in that village,” Elasaad says. “Now we see a shift: These children are drinking more water and becoming more healthy and hydrated.”

MIT’s experience in La Mancalona has spurred Dubowsky and his team to try to distribute similar solar-powered water purification systems to other communities in need, whether jungle villages or crowded cities. The system, he says, is uniquely designed to adapt to the water quality of any given region, making it flexible and affordable for a range of environments, and can utilize a variety of different water purification processes, including reverse osmosis, nanofiltration, or electrodialysis. The approach is focused on the design and control of these systems, which can enable widespread use.

“This technology would enable hotels, schools, hospitals, governments, et cetera, to produce water at a greatly reduced price,” Dubowsky says. “The technology MIT has developed is capable of producing economic value in these countries.”

This work was supported in part by the W.K. Kellogg Foundation.

In the World: Drinking water, from sunshine