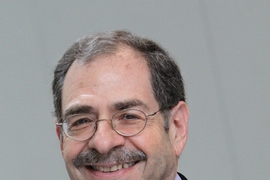 The Science Philanthropy Alliance, a coalition of nonprofit institutions and foundations dedicated to increasing investment in basic science research, announced today that physicist Marc Kastner, the Donner Professor of Science at MIT, will serve as its first president.

Kastner, a member of the faculty since 1973, served from 2007 to 2013 as dean of the School of Science. As president of the Science Philanthropy Alliance, he will lead the organization’s efforts to promote philanthropic giving and investment in pioneering science research critical to our long-term economic growth and quality of life.

“This is a critical time for basic science, with federal support declining in real terms, even as the need for this research is more important than ever for providing the basis of new advances in medicine and technology, providing a deeper understanding of our place in the universe, and attracting young people to study mathematics and science,” Kastner says. “While philanthropy can never replace federal support for basic research, its role has always been key to progress in science, and that role is now growing. I deeply appreciate this extraordinary opportunity to fulfill the Alliance’s goal of both broadening and deepening the nation’s philanthropic support for science.”

The Science Philanthropy Alliance seeks to increase philanthropic giving for basic science by $1 billion annually within five years. It also aims to ensure that the nation’s scientific enterprise has the scientists it needs, especially younger scientists, and that they are able to take the risks needed to discover nature’s deepest secrets. This effort includes demonstrating the power of scientific discovery and engaging new philanthropists and other nonprofit institutions and foundations to support it.

The founding members of the Science Philanthropy Alliance are the Gordon and Betty Moore Foundation, the Howard Hughes Medical Institute, the Kavli Foundation, the Research Corporation for Science Advancement, the Simons Foundation, and the Alfred P. Sloan Foundation.

“From his peers in science to policymakers in Washington, Professor Kastner’s ability to lead the charge for fundamental science is widely recognized and lauded,” says Robert W. Conn, chairman of the board of the Science Philanthropy Alliance and president and CEO of the Kavli Foundation. “We believe Professor Kastner is just the right person to lead the Alliance as we strive to significantly increase major private funding of vital scientific research.”

At MIT, Kastner was director of the Center for Materials Science and Engineering from 1993 to 1998 and head of the Department of Physics from 1998 until 2007, when he was named as dean of the School of Science.

Kastner, who had been nominated by President Barack Obama to serve as director of the Office of Science at the Department of Energy, will begin his appointment as president of the Science Philanthropy Alliance on March 15, taking a leave of absence from MIT.

The Chronicle of Higher Education reports that Prof. Marc Kastner has been appointed the first president of the Science Philanthropy Alliance. The alliance is aimed at increasing “philanthropic giving for basic science by an additional $1-billion annually within five years.”

Jeffrey Mervis writes for Science that Prof. Marc Kastner will serve as president of the Science Philanthropy Alliance, a group aimed at boosting support for basic scientific research. Kastner’s new position will allow him to make the case for the importance of basic research on a “national scale.”