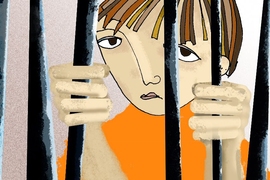 Teenagers who are incarcerated tend to have substantially worse outcomes later in life than those who avoid serving time for similar offenses, according to a distinctive new study co-authored by an MIT scholar.

“We find that kids who go into juvenile detention are much less likely to graduate from high school and much more likely to end up in prison as adults,” says Joseph Doyle, an economist at the MIT Sloan School of Management and co-author of a new paper detailing the results of the study.

A key to the study is that it uses the variation in judges’ sentencing tendencies to analyze a large pool of otherwise similar teenagers, thus isolating the effects of the sentences on the kids in question.

“We think this is some of the first real causal evidence on the effects of juvenile detention on kids’ outcomes,” Doyle adds.

Not returning to school

A new article on the study is published in the latest issue of the Quarterly Journal of Economics. The co-authors are Doyle and Anna Aizer, an associate professor of economics and public policy at Brown University.

The study looks at cases involving 35,000 juvenile offenders over a 10-year period in Chicago. The Chapin Hall Center for Children at the University of Chicago created a database on social programs in the state of Illinois that made the research possible.

The teenagers in question had all committed offenses that provided presiding judges with latitude in determining sentencing levels. The random assignment of judges with different sentencing tendencies to those cases allowed the researchers to conduct a “natural experiment,” as social scientists call it, examining the implications of the varying sentences.

Those periods of incarceration appear to make kids much less likely to return to school at all, particularly if they are around age 16 — which appears to be a significant mechanism underlying the later problems of those people.

“The kids who go to juvenile detention are very unlikely to go back to school at all,” Doyle explains. He adds that the later problems people have may also stem from the time spent incarcerated: “Getting to know other kids in trouble may create social networks that might not be desirable. There could be a stigma attached to it, maybe you think you’re particularly problematic, so that becomes a self-fulfilling prophecy.”

“Very disruptive” to be incarcerated

Other public-policy scholars who have read the study say it is a significant contribution to the field.

“I think it’s very credible,” says Janet Currie, a professor of economics and public affairs at Princeton University, who is familiar with the study. “It’s a very disruptive thing for a juvenile to be incarcerated.” And as Currie notes, a combination of policies and social stigma also make it considerably harder for people who have been incarcerated to find steady employment, and gain the increased social stability that might result.

Currie also suggests that future research might shed further light on the subject by looking at programs offering alternatives to juvenile detention — such as psychological counseling or treatment for drug problems — and seeing if those other approaches produce better results.

For their part, Doyle and Aizer readily acknowledge that the study only represents one criminal justice system in action during one time period, and say they would welcome further examination of the issue by other scholars.

“It would be great to see more research like this done in other locations with different criminal justice systems, and see if the results continue to hold,” Doyle says.

A new study co-authored by MIT Prof. Joseph Doyle found that juveniles who were incarcerated were less likely to return to school and more likely to return to jail as adults, reports Chris Sweeney for Boston Magazine. “If you want to be tough on crime, locking up juvenile offenders is counterproductive,” says Doyle.