Grants of up to $200,000 will fund environmental partnerships over the next two years.
Jennifer Chu | MIT News Office
Publication Date:
Press Inquiries 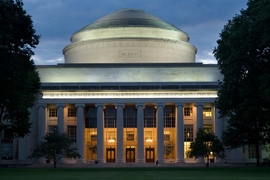 How can sustainable consumption in U.S. cities be fostered? Can the ocean floor be mined in an ecologically benign way? What are the health risks associated with the mining of rare metals used in energy-efficient products like photovoltaic devices? And how can truly promising environmental solutions have a better chance of becoming real economic policies?

These are some of the complex questions that researchers at MIT will now be able to tackle, with support from the MIT Environmental Solutions Initiative (ESI). The initiative was established last May to inspire solutions to major environmental problems through collaborative partnership.

In response to a call for research proposals, the ESI received 59 submissions. In March, the initiative awarded seed grants of up to $200,000 to nine research groups over the next two years.

ESI director Susan Solomon, the Ellen Swallow Richards Professor in MIT’s Department of Earth, Atmospheric and Planetary Sciences, says the seed grants have jumpstarted new collaborations among a variety of disciplines across campus.

“I was really pleased that so many people reached out to colleagues and looked at new collaborations, which was exactly what we were hoping would occur as a result of this process,” Solomon says. “There’s a lot of new thinking here. … I’m really pleased that people began those conversations. I think they’re just going to continue to grow and blossom as this initiative moves forward.”

According to the Environmental Protection Agency, humans have consumed more material and natural resources in the past 50 years than in the entire previous history of human existence. To curb consumption, the environmental community has encouraged the practice of sustainable consumption, using the mantra: “Reduce, Reuse, Recycle.”

But how are U.S. cities — hubs of materialism and consumption — actually practicing sustainable consumption? A group of urban planners, architects, and historians led by Judith Layzer, a professor of environmental policy in the Department of Urban Studies and Planning, will carry out a survey of 285 municipalities to explore the degree to which sustainable consumption goals have been adopted by local governments. The group wrote in its proposal that it hopes the survey will serve as a “valuable resource for cities that aspire to move toward sustainable consumption.”

Finding solutions to major environmental problems often involves input from both technology and policy experts — but it can be frustrating for both parties when they find that reasonable solutions can be difficult to put into practice. A classic example is the shared resource, such as a groundwater aquifer, that is overused to the point where it fails to benefit all parties. A group of engineers and economists, led by Dennis McLaughlin, the H.M. King Bhumibol Professor in the Department of Civil and Environmental Engineering, and Parag Pathak, an associate professor of economics, will examine the behaviors that drive competition for natural resources using game theory, a framework that has been used to analyze cooperative behavior in economics.

“There is a gap between the promise of game theory and the continuing difficulty of designing workable policy solutions to environmental issues,” the team wrote in its grant proposal. “The ESI seed grant program gives us a chance to narrow these gaps, so that the environmental solutions we propose as a community have a better chance of being implemented as real policies.”

Metals and mining products are increasingly used to support development. For example, they are essential to building wind turbines, solar panels, photovoltaic devices, and lithium-ion batteries.

But as societies depend more on rare metals for products, what impact will rising demand have on the environment? A group of engineers, led by Antoine Allanore, the Thomas B. King Assistant Professor in Metallurgy, and Alan Hatton, the Ralph Landau Professor of Chemical Engineering Practice, plans to launch a metals and mining initiative at MIT. As part of the project, the team will organize several symposia on campus that will connect industry stakeholders with MIT researchers to explore issues of sustainable mining.

Rare metals like indium and lanthanide are increasingly mined for use in high-efficiency photovoltaic devices, light-emitting diodes (LEDs), and batteries for hybrid cars. The effects of these metals on the environment and human health are unknown. A team of engineers led by John Essigmann, the William R. and Betsy P. Leitch Professor in the Department of Biological Engineering; Bevin Engelward, a professor of biological engineering; and Harold Hemond, the William E. Leonhard Professor in the Department of Civil and Environmental Engineering, will combine techniques in geochemistry and cell and molecular toxicology to assess the adverse effects of rare metals in the environment, and their potential impact on human health. Such an assessment, the team wrote in its proposal, should occur before new substances are introduced widely in the environment: “History provides numerous cautionary examples of the great economic and societal costs incurred when knowledge lags behind the deployment of new products.”

Deep below the ocean floor, there exist vast resources of gold, copper, platinum, and other rare metals — resources that are increasingly in demand for use in electronics and energy-efficient products. The world’s first deep-sea mining operation, scheduled to commence in 2017, will dig beneath the Bismarck Sea, off Papua New Guinea, for minerals. But scientists are concerned that mining operations may create currents that carry pollutants up from the deep sea, potentially poisoning marine species and the humans that consume them.

A team led by Thomas Peacock and Pierre Lermusiaux, both associate professors of mechanical engineering, and Glenn Flierl, a professor of oceanography, will develop a detailed ocean model to identify key circulation patterns in the region and determine the biological impacts of the mining operations. The team says the modeling tools developed through this effort “can be applied to any proposed location for the growing field of deep-sea mining.”

China has some of the world’s worst air pollution, as well as half its mercury emissions, due to its rising use of coal. In the last few years, the country has adopted policies to curb coal use and reduce air pollution. It is unclear, however, whether these measures will be consistent with the air-quality improvements set by newer policies.

A team of economists, engineers, and atmospheric chemists led by Valerie Karplus, an assistant professor of global economics and management, and Noelle Selin, the Esther and Harold E. Edgerton Assistant Professor in the Engineering Systems Division and the Department of Earth, Atmospheric and Planetary Sciences, will examine how current efforts to reduce coal use in China affect toxic air pollution across Asia. The team will also estimate changes in coal demand throughout Asia, as China’s own demand for coal falls. The team’s proposal states: “Our systems approach enables us to fully evaluate and identify effective efforts to address regional air quality, taking into account both the complexity of economic interactions and atmospheric chemical behavior.”

This project, the team says, “would represent the first application of machine-learning tools to environmental sensors.” The work will be led by Marta Gonzalez, an assistant professor of civil and environmental engineering; Colette Heald, the Mitsui Career Development Associate Professor in Contemporary Technology; Jesse Kroll, an associate professor of civil and environmental engineering, and Jinhua Zhao, the Edward H. and Joyce Linde Professor in the Department of Urban Studies and Planning.

Tropical peatlands, swamp forests found mostly in Southeast Asia, are thought to be vast carbon sinks, containing up to 70 billion tons of carbon — about 3 percent of the world’s soil carbon. Over the last 25 years, peatland forests have been cut and drained so that the underlying peat acts not as a sink, but a source, emitting enormous stores of carbon dioxide and methane into the atmosphere.

Policymakers and researchers suggest that controlling these emissions would be a cost-effective way to reduce the world’s total greenhouse-gas emissions. But there’s little knowledge about the physical and biological processes within peatlands that control carbon and methane fluxes. A group of engineers and atmospheric scientists will study soil processes in Brunei, on the island of Borneo, to characterize the flow of carbon dioxide and methane to the atmosphere. The researchers ultimately hope to apply their results to strategies for controlling greenhouse gas emissions. The group includes Charles Harvey, Benjamin Kocar, and Martin Polz of the Department of Civil and Environmental Engineering and Shuhei Ono and Roger Summons of the Department of Earth, Atmospheric and Planetary Sciences.

While two-thirds of greenhouse-gas-induced warming is due to carbon dioxide, other gases, such as methane and halogen-containing gases, contribute significantly to climate change. In the near future, these emissions may increase as a fraction of total greenhouse-gas emissions, as policies to reduce carbon dioxide bear results. As countries transition from coal to natural gas for electricity, more methane may escape into the atmosphere through leaks in natural-gas pipelines.

A team led by Jessika Trancik, the Atlantic Richfield Career Development Assistant Professor in Energy Studies, and Francis O’Sullivan, director of research and analytics at the MIT Energy Initiative, will develop metrics to compare climate impacts of non-carbon dioxide emissions, such as methane. The researchers will use the metrics to identify ways to reduce these emissions, particularly those of methane through the natural-gas supply chain. The team will use these results to inform current U.S. policy, including a new federal initiative to reduce methane. “Climate change mitigation is a multi-gas problem,” the researchers wrote in their grant proposal. “This work will inform important policy decisions that are slated to be made in the next few years.”

What the past teaches: meeting today’s global environmental challenges