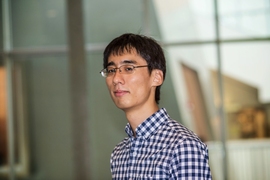 Daniel Kang, an MIT senior from Fairfax, Va., has won a prestigious Churchill Scholarship to pursue graduate studies at the University of Cambridge.

Kang is the 12th MIT student to win the Churchill Scholarship since its establishment by the Winston Churchill Foundation in 1963.

Kang is expected to graduate from MIT this spring with an SB and MEng in computer science and mathematics. As a Churchill Scholar, he pursue a master's degree in mathematical sciences at Cambridge. When he returns to the U.S., Kang plans to earn a PhD in machine learning and computational biology before pursuing a career as an academic researcher.

Kang received a Goldwater Scholarship last year in recognition of his academic and research accomplishments. Since 2013, Kang has conducted research on applied machine-learning techniques to study epigenetics in the laboratory of David Gifford, a professor of computer science and engineering at MIT.

“Daniel is an amazingly talented undergraduate who, as part of his [research], devised an ingenious model of human genome accessibility that has been validated by our biology collaborators,” Gifford says. “He is a world-changer, and I know that his time at the University of Cambridge will be important.”

For his contributions in Gifford's lab, Kang is listed as a co-author on a publication submitted for publication in Nature. Kang has also conducted research on the connections between classical and quantum mechanics with Kiril Datchev, now an assistant professor of mathematics at Purdue University. In addition, Kang has undertaken two internships at Google, where he has implemented new features in Google’s experimental video codec, and has also conducted research on security issues for Apple.