If companies like Amazon and Google have their way, soon enough we will have robots air-dropping supplies from the sky. But is our software where it needs to be to move and deliver goods in the real world?

This question has been explored for many years by researchers at MIT's Computer Science and Artificial Intelligence Laboratory (CSAIL), who have worked on scenarios inspired by domains ranging from factory floors to drone delivery.

At the recent Robotics Science and Systems (RSS) conference, a CSAIL team presented a new system of three robots that can work together to deliver items quickly, accurately and, perhaps most importantly, in unpredictable environments. The team says its models could extend to a variety of other applications, including hospitals, disaster situations, and even restaurants and bars. 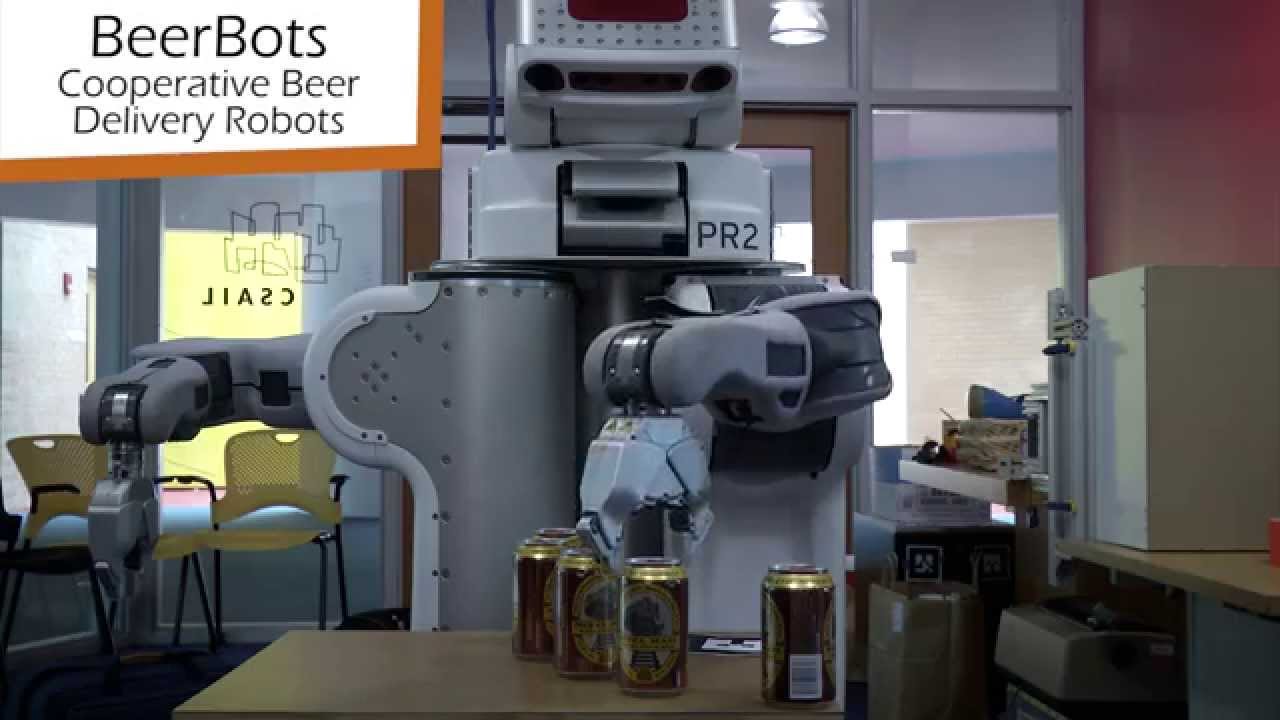 To demonstrate their approach, the CSAIL researchers converted their lab into a miniature “bar” that included a PR2 robot “bartender” and two four-wheeled Turtlebot robots that would go into the different offices and ask the human participants for drink orders. The Turtlebots then reasoned about which orders were required in the different rooms and when other robots may have delivered drinks, in order to search most efficiently for new orders and deliver the items to the spaces.

The team’s techniques reflect state-of-the-art planning algorithms that allow groups of robots to perform tasks given little more than a high-level description of the general problem to be solved.

One of the big challenges in getting robots to work together is the fact that the human world is full of so much uncertainty.

“Each robot’s sensors get less-than-perfect information about the location and status of both themselves and the things around them,” Amato says. “As for outcomes, a robot may drop items when trying to pick them up or take longer than expected to navigate. And, on top of that, robots often are not able to communicate with one another, either because of communication noise or because they are out of range.”

These uncertainties were reflected in the team’s delivery task: among other things, the supply robot could serve only one waiter robot at a time, and the robots were unable to communicate with one another unless they were in close proximity. Communication difficulties such as this are a particular risk in disaster-relief or battlefield scenarios.

“These limitations mean that the robots don’t know what the other robots are doing or what the other orders are,” Anders says. “It forced us to work on more complex planning algorithms that allow the robots to engage in higher-level reasoning about their location, status, and behavior.”

The researchers were ultimately able to develop the first planning approach to demonstrate optimized solutions for all three types of uncertainty.

Their key insight was to program the robots to view tasks much like humans do. As humans, we don’t have to think about every single footstep we take; through experience, such actions become second nature. With this in mind, the team programmed the robots to perform a series of “macro-actions” that each include multiple steps.

For example, when the waiter robot moves from the room to the bar, it must be prepared for several possible situations: The bartender may be serving another robot; it may not be ready to serve; or it may not be observable by the robot at all.

“You’d like to be able to just tell one robot to go to the first room and one to get the beverage without having to walk them through every move in the process,” Anders says. “This method folds in that level of flexibility.”

“These processes have traditionally been too complex to scale to the real world,” says Karl Tuyls, a professor of computer science at the University of Liverpool. “The MIT team’s approach makes it possible to plan actions at a much higher level, which allows them to apply it to an actual multi-robot setting.”

The findings suggest that such methods could soon be applied to even larger, more complex domains. Amato and his collaborators are currently testing the planning algorithms in larger simulated search-and-rescue problems with the Lincoln Lab, as well as imaging and damage assessment on the International Space Station.

“Almost all real-world problems have some form of uncertainty baked into them,” says Amato. “As a result, there is a huge range of areas where these planning approaches could be of help.”

Writing for The Huffington Post, Adi Gaskell highlights how CSAIL researchers have developed system to help robots work together successfully. Gaskell explains that the system allows three robots to “work successfully together to ensure items are delivered accurately in an unpredictable environment.”

Los Angeles Times reporter Jenn Harris writes that MIT researchers have developed a system that allows teams of robots to deliver items. Harris explains that the researchers hope their technique could be used to allow robots to aid in situations like “getting supplies and medicine across a battlefield in a war-torn country.”

MIT researchers have developed a program that allows a team of robots to work together to serve drinks, reports Lorenzo Ligato for the Huffington Post. The researchers, “programmed the robots with complex planning algorithms, which allowed the machines to engage in higher-level reasoning about their location, status and behavior -- similarly to they way humans perform tasks.”

Brook Hays of UPI writes that researchers from MIT have developed a new program that allows teams of robots to work together to pour and deliver drinks. Hays explains that the robots are “programmed to anticipate what drinks are needed where, taking orders and delivering drinks with the greatest possible level of efficiency.”

Kelsey Atherton of Popular Science reports on a system created by MIT researchers that allows robots to work in tandem to serve drinks. “This has uses beyond bartending,” writes Atherton. “MIT sees it as a potential system for hospitals or rescue work.”

MIT researchers have developed a new algorithm that allows robots to work together to efficiently serve drinks, Nidhi Subbaraman writes for BetaBoston. Subbaraman explains that the technique provides a “smarter approach to collaboration, preparing for possible missteps like dropping a bottle, or picking up the wrong one.”