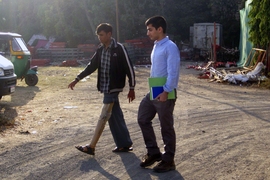 ↓ Download Image
Caption: Yashraj Narang SM '13 (right) conducted a comprehensive survey of above-knee amputees in India to understand their unique user-needs and the performance of their current prostheses.
Credits: Photo courtesy of the researchers. 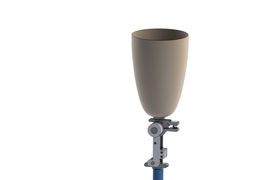 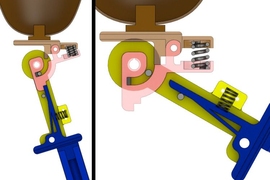 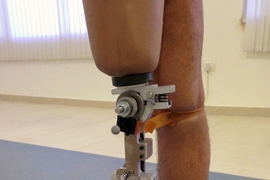 ↓ Download Image
Caption: A prototype of the prosthetic knee mechanism was tested at a Jaipur Foot organization in India.
Credits: Photo courtesy of the researchers. 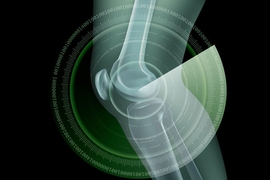 Caption:
Yashraj Narang SM '13 (right) conducted a comprehensive survey of above-knee amputees in India to understand their unique user-needs and the performance of their current prostheses.
Credits:
Photo courtesy of the researchers.

Caption:
A prototype of the prosthetic knee mechanism was tested at a Jaipur Foot organization in India.
Credits:
Photo courtesy of the researchers.

In the last two decades, prosthetic limb technology has grown by leaps and bounds. Today, the most advanced prostheses incorporate microprocessors that work with onboard gyroscopes, accelerometers, and hydraulics to enable a person to walk with a normal gait. Such top-of-the-line prosthetics can cost more than $50,000.

Amos Winter is aiming to develop a passive, low-tech prosthetic knee that performs nearly as well as high-end prosthetics, at a fraction of the cost.

“We’re going after this disruptive opportunity,” says Winter, an assistant professor of mechanical engineering at MIT. “If we can make a knee that delivers similar performance to a $50,000 knee for a few hundred dollars, that’s a game-changer.”

Now Winter and his colleagues have taken a significant step toward that goal. In a paper published in IEEE’s Transactions on Neural Systems and Rehabilitation Engineering, the team reports that it has calculated the ideal torque that a prosthetic knee should produce, given the mass of the leg segments, in order to induce able-bodied kinematics, or normal walking.

Using the paper’s results, the group has built a prototype of a prosthetic knee that generates a torque profile similar to that of able-bodied knees, using only simple mechanical elements like springs and dampers. The team is testing the prototype in India, where about 230,000 above-knee amputees currently live.

“In places like India, there’s still stigma associated with this disability,” Winter says. “They may be less likely to get a job or get married. People want to be incognito if they can.”

Most amputees in developing countries wear passive prostheses — simple, cheap designs with no moving parts. “When you see people walk in them, they have a pretty distinctive limp,” Winter says. In part, that’s because passive prostheses do not adjust the amount of torque exerted as a person walks. For instance, in normal walking, the knee flexes slightly, just before the foot pushes off the ground — a shift in torque that keeps a person’s center of mass steady. In contrast, a stiff, unbending prosthetic knee would cause a person to bob up and down with each step.

Winter reasoned that in order to produce a passive prosthetic knee that mimics normal walking, he would have to also mimic the changing forces, or torque profile, during normal walking. He and his team looked through the scientific literature for data on normal walking, and found a complete dataset that represented one person’s gait, including the angle of their joints, the weight of each leg segment, and the ground reaction force — the force between the ground and the foot — during a single step, or gait cycle.

The researchers used the measurements to calculate a torque profile — the amount of torque generated by the knee during normal walking. As prostheses are generally one-third to one-half as heavy as human legs and feet, the researchers adjusted the torque profile to apply to lighter leg segments.

“If you applied healthy levels of torque to a much lighter limb, your kinematics would get all screwed up,” Winter says. “Robotic limbs are designed to dial that torque back. Our challenge was, how do you tune the torque profile to get able-bodied motion, with a passive prosthetic knee?”

The researchers then looked at whether they could build a prosthetic knee to replicate the adjusted torque profile, using simple mechanical elements. Currently, the group has engineered a simple prototype that includes a spring and two dampers that act as brake pads. The spring allows the knee to bend just before the foot pushes off the ground. At the same time, the first damper engages to prevent the leg from swinging back. The second damper engages as the leg swings forward, in order to slow it down just before the heel strikes the ground.

Matthew Major, an assistant professor of physical medicine and rehabilitation at Northwestern University, says the challenge for prescribing clinicians and prosthetic designers is to customize prosthetics for individual users’ kinematics. Winter’s work, he says, “enhances our ability to provide more personalized health care through robust and cost-effective technology that is available to a vast percentage of the world’s population living with lower-limb loss.”

Winter's team is now testing the design with volunteers in India.

“This was a quick and dirty prototype, but so far, we’re seeing good indicators of natural gait,” Winter says. “I’m not ready to claim victory yet, but [this paper] lays out a roadmap that is very different than what’s been done before, which will enable us to achieve very high performance at low cost. And that’s what we’re going after.”

This research was funded, in part, by the Tata Center For Technology and Design, the Tata Trust, and the National Science Foundation.