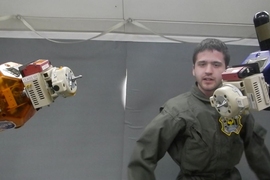 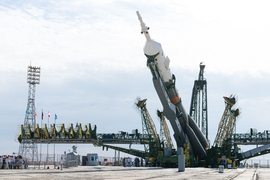 ↓ Download Image
Caption: The Soyuz TMA-17M spacecraft is raised into position on the launch pad Monday, July 20, 2015 at the Baikonur Cosmodrome in Kazakhstan. Launch of the Soyuz rocket is scheduled for July 23.
Credits: Credit: NASA/Aubrey Gemignani

MIT’s Lennon Rodgers, a research scientist who did graduate work in the MIT Space Systems Laboratory (SSL), led a team of students to build a universal docking port (UDP) for the Synchronized Position Hold, Engage, Reorient Experimental Satellites (SPHERES) testbed on the International Space Station (ISS). The flight versions were subsequently developed by graduate students Duncan Miller, David Sternberg, and Chris Jewison, working with Aurora Flight Sciences Corp., and launched to the ISS from Kazakhstan on Wednesday. The SPHERES with UDPs will be used to test autonomous, vision-based algorithms for complex docking maneuvers. Rodgers spoke with MIT News about what he hopes this mission will accomplish.

Q: What was the inspiration for this docking system, and what were some of the issues and challenges involved in coming up with a workable system?

A: We were initially exploring the feasibility of modular spacecraft, which is the idea that a spacecraft could be composed of multiple modules assembled in orbit. One application is the primary mirror of a large, space-based telescope. Instead of being limited by the size of the rocket, the mirror could be composed of multiple module segments and assembled in orbit. Another is testing algorithms for docking to a tumbling spacecraft.

So we set out to build a mechanism for connecting multiple SPHERES together autonomously and rigidly. A key requirement was that identical ports needed to connect to each other, which we referred to as “universal.” I worked with students as part of the [Department of Aeronautics and Astronautics] senior design class to design and build, in the AeroAstro machine shop, the mechanical components, and then continued to develop a camera-based sensor as part of my thesis.

Q: Can you describe how the system will work when it begins its tests on the ISS? What will a typical test run look like, and what kinds of operations will be carried out over time?

A: The UDPs will go through a checkout procedure by the astronauts and subsequently be mounted to the SPHERES already aboard the ISS. Then current SSL graduate students will perform remote tests from their control room in the SSL to validate their models and achieve docking in orbit in a variety of highly dynamic scenarios. Thrusters and sensors will be intentionally faulted to simulate failures. The team will also test novel navigation, autonomy, and reconfigurable control algorithms for the docked system. The UDPs will eventually be used for the Zero Robotics program, where middle and high school student teams compete by programming a SPHERES satellite to achieve virtual goals.

Q: What is the ultimate goal of this research, and what kinds of reconfigurable satellite systems might this research help to bring about?

A: The ultimate goal for the SPHERES docking port system is to provide an open testing platform for autonomous satellite assembly in zero gravity. The flight of the UDPs will be followed by a launch of [systems that] will enable a larger range of docking formations and autonomous satellite reconfiguration. This technology has applications to many next-generation space systems, including satellite servicing and assembly, large telescopes, space debris removal, and asteroid sampling.

UDPs are part of a long string of exciting space-based projects that the MIT Space Systems Lab has done and will be doing over the coming years under the direction of Professor David Miller and SSL director Alvar Saenz-Otero. There are a few planned hardware launches, including the launch of the REXIS instrument for the NASA OSIRIS-REx mission to an asteroid called Bennu, and the launch of MicroMAS 2 and MiRaTa, which are small weather satellites. This is a thrilling time for space research, especially for students and researchers at MIT.

Students take control of satellites on the International Space Station