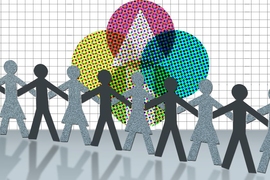 Gender diversity in the workplace helps firms be more productive, according to a new study co-authored by an MIT researcher — but it may also reduce satisfaction among employees.

At the same time, individual employees may prefer less diverse settings. The study, analyzing a large white-collar U.S. firm, examined how much “social capital” offices build up in the form of things like cooperation, trust, and enjoyment of the workplace.

The paper summarizing the study’s results, “Diversity, Social Goods Provision, and Performance in the Firm,” was recently published in the Journal of Economics and Management Strategy. The authors are Ellison, a senior lecturer in MIT’s Department of Economics, and Wallace P. Mullin, an economist at George Washington University.

The study used eight years of revenue data and survey results, covering 1995 to 2002, from a professional-services firm with more than 60 offices in the United States and abroad. The data included some all-male and all-female offices — both of which are unusual, the researchers note — in addition to mixed-gender offices. The survey data allowed Ellison and Mullin to study the employees’ ratings of office satisfaction, cooperation, and morale, not just one generalized measure of workplace happiness.

Among other results, the economists found that shifting from an all-male or all-female office to one split evenly along gender lines could increase revenue by roughly 41 percent. To see how this could happen, Ellison suggests an analogy with a baseball team.

“A baseball team entirely composed of catchers could have high esprit de corps,” Ellison says, noting that a band of catchers could share experiences, equipment, or tips for handling knuckleballs. “But it would not perform very well on the field.”

Similarly, greater social diversity implies a greater spread of experience, which could add to the collective knowledge of a group of office workers and make the unit perform more effectively.

Another wrinkle Ellison and Mullin found is that just the perception that firms are diverse was sufficient to produce satisfaction among employees — but this perception did not necessarily occur in the places where more extensive gender diversity accompanied better bottom-line results.

“In offices where people thought the firm was accepting of diversity, they were happier and more cooperative,” Ellison says. “But that didn’t translate into any effect on office performance. People may like the idea of a diverse workplace more than they like actual diversity in the workplace.”

Ellison acknowledges that in focusing on a single firm that was willing to provide data, the study was necessarily limited in scope, and says she would welcome further research. Management studies on social capital, she says, do not necessarily link the matter to objective financial results; economics studies of social capital have generally focused on issues such as public finance or even soldier behavior, and not job issues.

“There have been a number of studies looking at things like diversity and performance, but they don’t always use the [bottom-line] measures of performance that economists might prefer,” Ellison says. At the same time, she adds, “Highlighting the workplace setting, as a place for economists to study social capital, is also useful.”

The work was funded in part by the National Science Foundation.

Shana Lebowitz writes for Forbes about a study co-authored by Dr. Sara Ellison that determined that gender-diverse teams are more productive than their single-gender counterparts: “[R]esearchers estimated that transitioning from a single-gender office to an office evenly split between men and women would translate to a whopping 41% revenue gain.”

Susan Adams writes for Forbes about research coauthored by Dr. Sara Ellison that indicates that single-sex teams are less productive than their co-ed counterparts. “The authors say their research shows that switching from a single-sex group to a co-ed team could increase revenues by a whopping 41%,” Adams writes.

Research by Dr. Sara Fisher Ellison indicates that co-ed teams are more productive, but have lower job satisfaction, writes Rachel Emma Silverman for The Wall Street Journal. “The researchers posit that shifting an all-female or all-male team to a coed one would increase revenues by 41%.”

Kathryn Hauser of WBZ News reports on the new MIT study showing that while workers are happier in single-sex offices, diversity results in higher levels of productivity. “If this spurs more firms to think seriously about trying to increase gender diversity, I for one would be pleased,” says Dr. Sara Ellison, co-author of the study.

Hailey Lee of CNBC examines a new study co-authored by Dr. Sara Ellison, which found that gender diversity in the workplace increased productivity. The study shows that "companies really need to start considering whether introducing more diversity could in fact benefit their bottom line in ways they may not be able to predict or understand," says Ellison.

Sharon Crowley of Fox News reports on the new study co-authored by MIT economist Dr. Sara Ellison on diversity in the workplace. The study found that while diverse workplaces are more productive, workers are happier in single-sex offices.

In a piece published by The Huffington Post, Chad Brooks writes about a new study co-authored by Dr. Sara Ellison, which found that increasing gender diversity in the workplace can make businesses more productive. “Despite the improved production, individual employees may prefer a less diverse setting,” writes Brooks of the study’s findings.

Zeninjor Enwemeka of WBUR writes about a new study examining diversity in the workplace by MIT economist Dr. Sara Ellison. The study found that while many workers actually prefer a homogenous workplace, shifting to an office evenly split along gender lines could increase revenue.

Boston Globe reporter Katie Johnston writes about a new MIT study showing that while employees are happier when they work with people of the same sex, single-sex workplaces aren’t nearly as productive. Employees “liked the idea of diversity more than they liked actual diversity,” says Dr. Sara Ellison, co-author of the study.