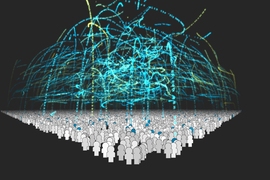 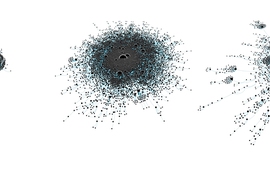 ↓ Download Image
Caption: A graph of 15,000 nodes is organized to better reveal clusters. This graph was generated by a model of how messages travel through social networks.
Credits: Image courtesy of Philip DeCamp and Deb Roy/MIT Media Lab 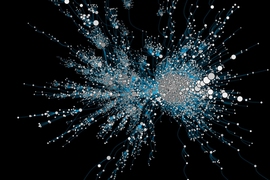 Caption:
The Laboratory for Social Machines will focus on the billions of messages people post publicly every day.
Credits:
Image courtesy of Philip DeCamp and Deb Roy/MIT Media Lab

Caption:
A graph of 15,000 nodes is organized to better reveal clusters. This graph was generated by a model of how messages travel through social networks.
Credits:
Image courtesy of Philip DeCamp and Deb Roy/MIT Media Lab

Caption:
The Laboratory for Social Machines will focus on the billions of messages people post publicly every day to create quantitative models of social networks, information flow, and feedback cycles.

The MIT Media Lab today announced the creation of the Laboratory for Social Machines (LSM), funded by a five-year, $10 million commitment from Twitter. As part of the new program, Twitter will also provide full access to its real-time, public stream of tweets, as well as the archive of every tweet dating back to the first.

The new initiative, based at the Media Lab, will focus on the development of new technologies to make sense of semantic and social patterns across the broad span of public mass media, social media, data streams, and digital content. Pattern discovery and data visualization will be explored to reveal interaction patterns and shared interests in relevant social systems, while collaborative tools and mobile apps will be developed to enable new forms of public communication and social organization.

A main goal for the LSM will be to create new platforms for both individuals and institutions to identify, discuss, and act on pressing societal problems. Though funded by Twitter, the LSM will have complete operational and academic independence. In keeping with the academic mission of LSM, students and staff will work across many social media and mass media platforms — including, but not limited to, Twitter.

“The Laboratory for Social Machines will experiment in areas of public communication and social organization where humans and machines collaborate on problems that can’t be solved manually or through automation alone,” says Deb Roy, an associate professor at the Media Lab who will lead the LSM, and who also serves as Twitter’s chief media scientist. "Social feedback loops based on analysis of public media and data can be an effective catalyst for increasing accountability and transparency — creating mutual visibility among institutions and individuals."

"With this investment, Twitter is seizing the opportunity to go deeper into research to understand the role Twitter and other platforms play in the way people communicate, the effect that rapid and fluid communication can have and apply those findings to complex societal issues," says Dick Costolo, CEO of Twitter.

"As social media leads us into the emergence of a new era of communication and engagement, the LSM, in collaboration with Twitter, will create analytical tools to help turn the vision of a new public sphere into reality," adds Joi Ito, director of the MIT Media Lab.

Researchers from the Laboratory for Social Machines have partnered with The Washington Post to examine how people are discussing the current presidential election on Twitter. The researchers use a program that detects and categorizes tweets “to see which issues or candidates have had the biggest share of the conversation.”

BetaBoston reporter Curt Woodward writes about a new study by researchers from the MIT Laboratory for Social Machines examining how the government of Jun, a small town in southeastern Spain, is using Twitter to interact with residents. The researchers found that “residents’ tweets are incorporated into livestreamed city council meetings.”

Larry Greenemeier of Scientific American examines the new MIT Laboratory for Social Machines, based out of the Media Lab and funded by a commitment from Twitter. Greenemeier writes that the lab will be focused on finding new ways of “extracting meaningful semantic and social patterns from Twitter’s daily flood of selfies, rants and observations.”

Colleen Shalby reports for the PBS NewsHour that MIT is launching a new laboratory to examine how people use social media, in particular Twitter. Twitter is granting MIT researchers access to every tweet sent in the social network’s history as part of this new project.

The MIT Media Lab has received a $10 million committment from Twitter to examine data from tweets, writes Jordan Graham for the Boston Herald. The lab will develop technologies to analyze “all the different kinds of media, mass media and social media that make up public opinion,” explains Professor Deb Roy.

Joshua Brustein writes for Bloomberg Businessweek that MIT is launching a new laboratory, funded by a $10 million committment from Twitter, to study social patterns on the web. “There are a lot of people at Twitter who are interesting in leveraging Twitter for social good,” says Professor Deb Roy.

“The Massachusetts Institute of Technology and Twitter are teaming up on a $10 million project to better understand social networks and figure out new ways to benefit from them,” reports the Associated Press. The partnership will allow MIT access to Twitter’s archive, as well as real-time monitoring of new tweets.

WBUR reporter Zeninjor Enwemeka writes about the new MIT laboratory launched this week to analyze social media.  “The new lab will focus on understanding how people behave across various types of media, and develop tools to make sense of social patterns,” writes Enwemeka.

Andrea Chang of The Los Angeles Times writes about a new partnership between Twitter and MIT to study social media patterns. Twitter is providing the MIT Media Lab with $10 million to study and make sense of content across social and mass-media platforms.

Steve Annear of Boston Magazine writes about Twitter’s $10 million committment to the MIT Media Lab to study the social network’s data. The research “will focus on developing new technologies so that researchers can better digest the logic and ‘social patterns’ in mass media, social media, data streams, and digital content,” writes Annear.

Thanks to a $10 million committment from Twitter, researchers at MIT plan to establish a Laboratory for Social Machines to analyze Twitter messages in real time, writes Hiawatha Bray of The Boston Globe. “With this data, the lab plans to develop new communication tools to help address social problems,” Bray explains.

“With a $10 million investment from Twitter, data scientists at MIT’s Media Lab are creating a new research group that will get access to Twitter’s entire feed of real-time and archived public tweets,” writes Yoree Koh for The Wall Street Journal.

“Twitter Inc on Wednesday gave $10 million to the Massachusetts Institute of Technology for research that would explore how people use and achieve shared goals using social networks,” writes Christina Farr for Reuters. The committment will fund a new laboratory where researchers will develop tools to analyze social media patterns.

Social media at MIT: Behind the scenes at the Media Lab