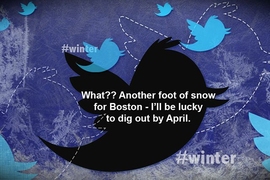 In the last year or two, you may have had some moments — during elections, sporting events, or weather incidents — when you found yourself sending out a flurry of messages on social media sites such as Twitter.

You are not alone, of course: Such events generate a huge volume of social-media activity. Now a new study published by researchers in MIT’s Senseable City Lab shows that social-media messages grow shorter as the volume of activity rises at these particular times.

“This helps us better understand what is going on — the way we respond to things becomes faster and more impulsive,” says Carlo Ratti, director of the Senseable City Lab and an associate professor of the practice in MIT’s Department of Urban Studies and Planning.

Take Twitter, where individual messages have a 140-character limit. The study found that at times of lower activity, the most popular length of tweets ranges from about 70 to 120 characters. But at moments of much greater traffic — when messages are sent up to 200 times as frequently — the highest concentration of tweets is only around 25 characters in length, and declines sharply to a low at about the 130-character mark.

“If you plot the rate of the messages versus the length, then you can find a mathematical relation between these two things during [major] events,” adds Michael Szell, a researcher at the Senseable City Lab.

Ratti, Szell, and Senseable City researcher Sebastian Grauwin are co-authors of a new paper about the study, “Contraction of online response to major events,” published today in the journal PLoS ONE.

Three words for golf fans: You the man!

To conduct the study, the researchers looked at data from several social-media sources at a variety of moments. The Twitter data, for example, comes from April 2012 and involves tweets on the subject of The Masters, one of golf’s four major tournaments. That year, golfer Bubba Watson won the tournament in a dramatic playoff against Louis Oosthuizen, prompting a flurry of shorter tweets.

As the paper drolly notes, a “large part of these tweets contain the name ‘Bubba’ followed by a varying number of exclamation marks.’”

Other data used in the study includes social media activity during election night in the U.S. in November 2012, and during a major snowstorm in February 2013.

“We wanted to see if this was Twitter-specific or if it happens in other media as well,” Szell says. “Basically we found this effect every time there was an event going on. And when there was no event, we did not find this effect.”

Renaud Lambiotte, a mathematician at the University of Namur in Belgium who has read the study, calls it “an interesting piece of research” that may lead to fruitful follow-up work, “in particular for the modeling of the relation between behavioral response and emotional stimuli.” Lambiotte suggests that well-designed online social experiments may yield further insight about behavior on social media.

The Senseable City Lab conducts large-scale data projects, often based on mobile technology or social media, to evaluate patterns of activity in urban environments or among technologically connected networks of people.

“It’s all about detecting specific signatures of how people behave, in any kind of aspect of their life, whether it’s tweeting, commenting, or moving around,” says Grauwin, who is working in the Senseable City Lab via a fellowship with the technology firm Ericsson.

The current study also revealed what Grauwin calls an “index of frustration” among some social-media users: namely, during major events, a small minority of users run up against the 140-limit on Twitter.

Ratti suggests that further studies of message length will continue to uncover more data that could be useful in the design of social-media platforms. He also thinks more research can shed light on the behavioral mechanisms that lead people to send shorter messages: Are people doing this independently, or in response to seeing other short messages?

“You get this kind of herd effect,” Ratti says. “The paper suggests this is an interesting problem to look at.”

The heat is on