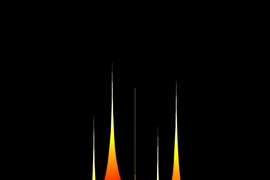 ↓ Download Image
Caption: Plot of radiative quality factor as a function of wave vector for a photonic crystal slab. At five positions, this factor diverges to infinity, corresponding to special solutions of Maxwell equations called bound states in the continuum. These states have enough energy to escape to infinity but remain spatially localized.
Credits: Courtesy of the researchers

Caption:
Plot of radiative quality factor as a function of wave vector for a photonic crystal slab. At five positions, this factor diverges to infinity, corresponding to special solutions of Maxwell equations called bound states in the continuum. These states have enough energy to escape to infinity but remain spatially localized.
Credits:
Courtesy of the researchers

Researchers at MIT who succeeded last year in creating a material that could trap light and stop it in its tracks have now developed a more fundamental understanding of the process. The new work — which could help explain some basic physical mechanisms — reveals that this behavior is connected to a wide range of other seemingly unrelated phenomena.

The findings are reported in a paper in the journal Physical Review Letters, co-authored by MIT physics professor Marin Soljačić; postdocs Bo Zhen, Chia Wei Hsu, and Ling Lu; and Douglas Stone, a professor of applied physics at Yale University.

Light can usually be confined only with mirrors, or with specialized materials such as photonic crystals. Both of these approaches block light beams; last year’s finding demonstrated a new method in which the waves cancel out their own radiation fields. The new work shows that this light-trapping process, which involves twisting the polarization direction of the light, is based on a kind of vortex — the same phenomenon behind everything from tornadoes to water swirling down a drain.

In addition to revealing the mechanism responsible for trapping the light, the new analysis shows that this trapped state is much more stable than had been thought, making it easier to produce and harder to disturb.

“People think of this [trapped state] as very delicate,” Zhen says, “and almost impossible to realize. But it turns out it can exist in a robust way.”

In most natural light, the direction of polarization — which can be thought of as the direction in which the light waves vibrate — remains fixed. That’s the principle that allows polarizing sunglasses to work: Light reflected from a surface is selectively polarized in one direction; that reflected light can then be blocked by polarizing filters oriented at right angles to it.

But in the case of these light-trapping crystals, light that enters the material becomes polarized in a way that forms a vortex, Zhen says, with the direction of polarization changing depending on the beam’s direction.

Because the polarization is different at every point in this vortex, it produces a singularity — also called a topological defect, Zhen says — at its center, trapping the light at that point.

Hsu says the phenomenon makes it possible to produce something called a vector beam, a special kind of laser beam that could potentially create small-scale particle accelerators. Such devices could use these vector beams to accelerate particles and smash them into each other — perhaps allowing future tabletop devices to carry out the kinds of high-energy experiments that today require miles-wide circular tunnels.

The finding, Soljačić says, could also enable easy implementation of super-resolution imaging (using a method called stimulated emission depletion microscopy) and could allow the sending of far more channels of data through a single optical fiber.

“This work is a great example of how supposedly well-studied physical systems can contain rich and undiscovered phenomena, which can be unearthed if you dig in the right spot,” says Yidong Chong, an assistant professor of physics and applied physics at Nanyang Technological University in Singapore who was not involved in this research.

Chong says it is remarkable that such surprising findings have come from relatively well-studied materials. “It deals with photonic crystal slabs of the sort that have been extensively analyzed, both theoretically and experimentally, since the 1990s,” he says. “The fact that the system is so unexotic, together with the robustness associated with topological phenomena, should give us confidence that these modes will not simply

be theoretical curiosities, but can be exploited in technologies such as microlasers.”

The research was partly supported by the U.S. Army Research Office through MIT’s Institute for Soldier Nanotechnologies, and by the Department of Energy and the National Science Foundation.