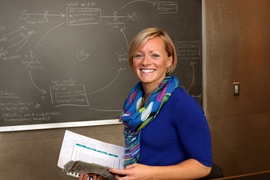 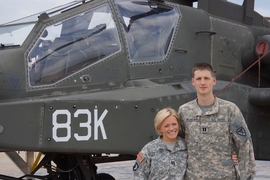 Caption:
Jillian (center) with her family and Team Red, White and Blue. Wisniewski participates in an annual race to raise funds for the organization whose mission is to reintegrate vets into society trough physical activity.
Credits:
Photo courtesy of Jillian Wisniewski

Jillian Wisniewski spent Thanksgiving 2009 at a U.S. Army base in Jalalabad, Afghanistan, with just weeks until the end of her deployment and return to the U.S.

Back then Wisniewski, now a student in the System Design and Management program at MIT, was an Army captain working in aviation intelligence. Her team was a motley crew, including an experienced soldier who had worked in armor, a recent college graduate who had studied criminology, and a helicopter pilot who contributed his programming skills to her intelligence section after he was grounded from flight due to migraines.

“We had very diverse skillsets, but we worked together like a well-oiled machine,” she says.

The team practiced threat modeling and risk analysis — for example, figuring out the safest flight routes, operational times, and landing zones, with life-or-death ramifications. The team deployed in December 2008; within their first month, an American helicopter was downed in the Korengal Valley of northeastern Afghanistan.

Intelligence work was difficult. There were tons of data and many opportunities to make mistakes, owing to the complexity of the analysis and errors in the data itself.

So Wisniewski called upon the analytical skills from her undergraduate degree in operations research, and applied them to intelligence collection and analysis. Not wanting to rely on existing databases to answer her team’s intelligence questions, she pushed to get raw data from various sources so that she could begin to direct other platforms, including pilots, to provide more detailed collection.

Wisniewski and her team ultimately came up with a methodology for efficiently collecting appropriate data, building a database of relevant variables, and implementing workflow practices that reduced errors and redundancies in processing and analysis. Perhaps most importantly, they started communication channels so pilots could benefit from intelligence gathered by those on the ground, and vice versa.

With improved methodologies, the team was able to contribute beyond the normal scope of duties for an aviation intelligence section. They felt invested in the mission and safety of coalition forces — so much so that on that Thanksgiving in 2009, the team found the prospect of returning home to be bittersweet. For Wisniewski, the art of tactical-level intelligence analysis is in helping to reduce uncertainty in future events; the act of leaving seemed to only to increase that uncertainty.

“I don’t want to be egotistical in saying what we had was great,”  Wisniewski says. “But it is fair to say we had a great team dynamic. We were able to work systematically and effectively because we understood the mathematical foundation of our tools. And I think that process is replicable.”

Wisniewski’s interest in replicating the workings of that intelligence team on a large scale is what drew her to System Design and Management at MIT. The program, jointly offered by the School of Engineering and MIT Sloan School of Management, educates midcareer professionals in using systems thinking to address large-scale, complex sociotechnical challenges.

For Wisniewski, the program couldn’t be more applicable to her military work. Her thesis, “A Process Improvement for Tactical Level Military Intelligence Analysis,” will propose new intelligence solutions that better prepare and empower analysts to make smart intelligence judgments.

After Wisniewski graduates at the end of this year, she’ll head back to West Point, where she will teach in the Department of Systems Engineering and work with the Army Operations Research Center.

How she got there

Wisniewski grew up in Virginia and West Virginia with two older brothers. Her father commuted to Washington, where he worked in the Bureau of Labor Statistics. She hadn’t always wanted to go to West Point — in fact, she hadn’t even thought of it until the summer before her senior year, when her brother, Jake, a fellow Army soldier who went on to receive a Purple Heart for actions during one of his tours in Iraq, encouraged her to apply. At the time, he was a cadet within Virginia Tech’s Corps of Cadets, and his sister took to heart his advice to apply to the Academy.

She was intimidated by the hefty application: West Point applicants must go through intense physical performance and medical examinations and be recommended by a member of Congress, on top of the typical requirements for a college application. Wisniewski remembers thinking, “If I even finish this application, I deserve a badge or something.”

When she started the application process, she hadn’t been completely decided. Then came the terrorist attacks of Sept. 11, 2001.

“That sealed the deal,” she says. “There was no doubt in my mind that if I got in, I would go. And that I would never quit.”

Wisniewski finished the application, and was awarded no badge. Instead, she was accepted.

She was 17 years old when she first arrived at West Point. The rigor and discipline took some adjustment; at times, it all felt almost absurd.

“I didn’t realize what I was getting into,” she says. “We do have to wear uniforms at all times, and it does matter what color socks you’re wearing.”

In uniform, toting helmet, and dummy rifle, often wearing a grin and a giant rucksack on her petite frame, Wisniewski soon earned the nickname “Myrtle the Turtle.”

“I thought it was funny, and also incredible. I remember looking at the long line of soldiers marching and just thinking, ‘This is so awesome, and I’m a part of it,’” she says. “I did get in trouble for smiling a lot.”

At West Point, Wisniewski studied operations research, which would directly impact her future work in intelligence. “My undergraduate education was more important to my field even than my military intelligence training,” she says. “At first I felt like I was playing dress-up. And by the end it was complete transformation. I felt like I had found a sense of purpose.”

Balancing it all out

On top of her studies and military work, Wisniewski is also a mother and a wife. She and her husband were high-school sweethearts who had their first date in 1999 and went to their prom together in 2002. They both went to West Point and have been together ever since.

She has two children, ages 7 and 2; balancing child care with the schedule of her husband, an MBA student at Harvard Business School, is no easy task.

“You’re trying to make the ideal happen,” she says. “You try to be a supermom and a super-student. I think I’ve learned the truth in the saying, ‘It takes a village,’ and I’m fortunate enough to have my mother to help care for my family. It’s challenging for all of us, but I wouldn’t have it any other way, and I think we will all benefit from this experience together.”