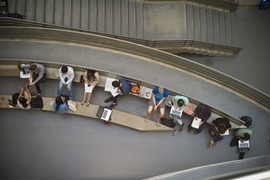 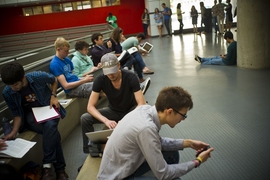 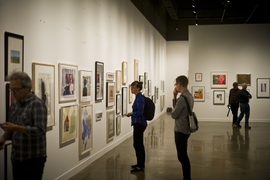 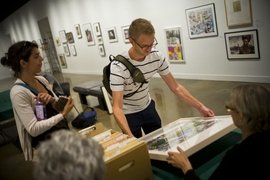 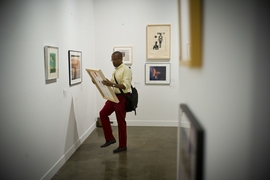 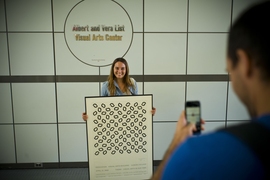 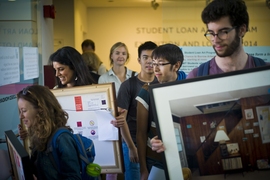 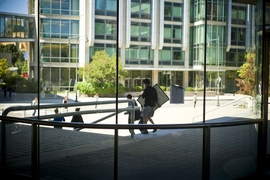 Visitors to MIT earlier this month may have spotted what looked like a slow — and highly participatory — art heist: Over the course of three days, from Sept. 10 to 12, 593 students entered the List Visual Arts Center and left with pieces of its collection.

This year marks the 45th anniversary of MIT’s Student Loan Art Program: After viewing the collection, choosing their favorites, and participating in a lottery, lucky graduate students and undergrads are given the opportunity to bring home one of the List’s works of art. They may then spend the year taking catnaps beneath it, eating ramen noodles alongside it, and asking it for help with p-sets — in other words, generally getting to know “their” artwork.

The Student Loan Art Collection draws from four smaller collections. The oldest, the Catherine N. Stratton Collection of Graphic Arts, was established in 1966 by Catherine “Kay” Stratton, the wife of then-President Julius A. Stratton.

Kay Stratton — who died this month at age 100, and who also helped to establish the Council for the Arts at MIT — spent her childhood on a farm in Virginia, getting an education she has described as “spotty.”

“I learned about art the hard way: going to galleries, talking to artists, and studying art in a very informal way,” Stratton said in 2011. “But it turned out to be, I think, one of the ways one can learn about art.”

Stratton sought to make things easier for MIT students — and, in the process, to enrich the world that they would help build: “It has always seemed to me that you could be an excellent engineer … but if you wanted to be beautiful, if you wanted to build a beautiful bridge, you had to have a background in the arts,” she said.

SLIDESHOW: This year, as part of MIT's Student Loan Art Program, 593 students entered the List Visual Arts Center and left with pieces of its collection. By the exhibition’s final day, everything must go: Students who lined up early enough in the List’s lobby were guaranteed to come away with something.
Dominick Reuter

A 1978 article in The Tech, MIT’s student newspaper, said that the loan program boasted “a full range of styles and mediums used by contemporary and modern artists … [including] abstract expressionist, minimal, color-field, pop, op-art, and figurative.”
Dominick Reuter

Would-be art-borrowers with notepads and golf pencils examine piece after piece, or scan quickly and then home in on whatever grabs them.
Dominick Reuter

The Student Loan Art Program grows by 15 to 20 artworks every year.
Dominick Reuter

After viewing the collection, choosing their favorites, and participating in a lottery, lucky graduate students and undergrads are given the opportunity to bring home one of the List Visual Arts Center’s works of art.
Dominick Reuter

Students took this advice to heart, and began borrowing art from Stratton’s collection in 1969. The addition of the Albert and Vera List Student Loan Collection in 1977 prompted the first of the now-annual September gallery shows: A 1978 article in The Tech, MIT’s student newspaper, said that the loan program boasted “a full range of styles and mediums used by contemporary and modern artists … [including] abstract expressionist, minimal, color-field, pop, op-art, and figurative.”

Another influx of loaner art came in 1985, from photography enthusiast Ronald A. Kurtz ’55, ’59, SM ’60, whose collection at the List is now over 500 pieces strong; 40 of his donations are active in the student loan program. Recently, Cynthia F. and Michael W. Weisfield ’66 have donated many works to the program.

Mark Linga, the List’s public relations, marketing, and social media coordinator, says the Student Loan Art Program grows by 15 to 20 artworks every year, thanks to “the expertise of List staff and the generous support of the Friends of Boston Art and other patrons.”

The art is eclectic: Students who visit the List each September to examine the available artwork might find a 19th-century exhibition poster nestled next to a 21st-century movie still, or a fuzzy Richard Artschwager question mark alongside a bright Fred Tomaselli collage. Doc Edgerton’s strobe-light photographs might appeal to physicists, while red-and-blue Louise Bourgeois spiders, dancing on a sheet of staff paper, might go to a fleet-fingered musician.

Would-be art-borrowers with notepads and golf pencils examine piece after piece, or scan quickly and then home in on whatever grabs them. After the weeklong exhibition closes, the List holds a lottery. Students matched with one of their choices are informed via email.

In this year’s lottery, Desi Gonzalez, a graduate student in comparative media studies, received her first choice, after trying for it last year and coming up short. She can’t wait to begin her relationship with Frances Stark’s “Untitled.”

“Looking at a work over time changes how you see,” she explained in a blog post. “Having a work hanging on your wall for nine months — it allows you to experience art in a way you never could within a museum.”

Those who don’t win the initial lottery may still be selected as alternates, with first pick from among the leftovers. On his second go-round, Michael Greshko, a student in the Graduate Program in Science Writing, paired off with “Untitled,” an etching by the 20th-century Polish artist Krystyna Smiechowska. “I just kept coming back to it,” Greshko says. “It has a mystery about it that makes it endlessly viewable.”

Graduate student Anika Gupta went with a 1926 portrait of social activist Dorothy Whitney by renowned black-and-white photographer Berenice Abbott: “What I liked about my piece was the mischievous expression in Whitney’s eyes, the joy and freedom in her being. … I felt like I was looking at a person whom I would want to get to know.”

Inspiration for the Institute

By the exhibition’s final day, everything must go: Students who lined up early enough in the List’s lobby were guaranteed to come away with something. Freshman Mary Clare Beytagh left carrying carrying Fia Backström’s “Studies in Leadership: The Golden Voice” — a 2009 artwork nearly as tall as Beytagh.

“I’d actually been waiting for art since I got [to MIT],” she told me. “There’s a big blank space above my bed, and I’ve wanted to put something there.”

Beytagh was drawn to the Backström silkscreen’s colors, and its stylized, “Picasso-esque” face. “It’s kind of inspirational, too. … It should help me with presentation skills in my [Humanities, Arts, and Social Sciences] classes.”

At MIT, dorm decor has a museum quality