Dedication to the arts and a vibrant campus shaped decades of contributions to the Institute.
News Office
Publication Date:
Press Inquiries 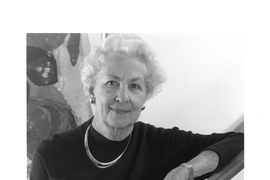 Catherine N. “Kay” Stratton — the wife of former MIT President Julius A. Stratton, and for decades a great friend of the arts at MIT — died Sept. 10 at her beloved farm in South Newfane, Vt. She was 100 years old.

Born in Los Angeles, Stratton was brought up in Charlottesville, Va., and attended the University of Virginia’s Mary Washington College before enrolling in Wellesley College after her marriage in 1935.

Long after serving, from 1959 to 1966, as the wife of MIT’s 11th president, Stratton made extensive contributions to the Institute, enriching the lives of students and faculty through her dedication to the arts and her commitment to a more vibrant campus.

“Kay never stopped imagining ways that MIT might become a better place,” says Lawrence S. Bacow, president emeritus of Tufts University, who served as MIT’s chancellor from 1998 to 2001. “I first met her shortly after I became chancellor, when she came to talk to me about creating senior housing for MIT’s retirees. Later she enlisted me as a participant in the lecture series that she organized annually: Kay assembled leading experts from the Institute and beyond to focus attention on major issues of the day. Kay was a gem: the youngest, liveliest centenarian I have ever known.”

Stratton co-founded the MIT Arts Committee in 1960 to foster the creative and performing arts at MIT, and to “bring to MIT a new emphasis on art as a necessary counterbalance to technology.” The Arts Committee’s recommended policy, still in place today, designates that 1 percent of every construction budget at MIT be designated for art for that building.

The Arts Committee was later expanded into the Council for the Arts at MIT; during Stratton’s tenure as its co-chair, MIT’s permanent collection acquired works by prominent artists such as Henry Moore, Alexander Calder, Pablo Picasso, Louise Nevelson, Robert Motherwell, and Andy Warhol. Today, MIT students may borrow artworks annually through the Catherine N. Stratton Collection of Graphic Arts to enliven and enrich their dormitory rooms and living areas.

“I have been with the Council for the Arts at MIT in one role or another since 1990, and one of the greatest parts of a great job has been the honor and privilege of calling Kay Stratton a friend,” says Susan Cohen, director of the Council for the Arts at MIT. “I remember when I first started, and I was addressing her as ‘Mrs. Stratton,’ she turned to me and said, ‘Please call me Kay, all my friends do.’ I felt like I had been ushered into a sort of charmed world. She was so much fun to be around, and such a positive force. She was what we all should aspire to be: honest, graceful, gracious, and a little mischievous.”

Stratton’s vision, energy, and wide-ranging interests spurred others to activity within the MIT community. “It would never occur to me to just sit and rock,” she once said. “I adore putting ideas and people together.”

In 1988, Stratton created the “Aging Successfully” lecture series at MIT to explore health topics of concern especially — but not exclusively — to an aging population. MIT created a Lecture on Critical Issues series in her honor in 1994, which has included such varied topics as Internet security, population growth, control of nuclear weapons, and microfinance.

While living in New York when her husband was chairman of the Ford Foundation from 1966 to 1971, Stratton served on the board of the Bank Street College of Education. New York Mayor John V. Lindsay named her chair of the Visual Arts Committee of the New York City Cultural Alliance. She was a member of the boards of both the national and world YWCA, and was named Volunteer of the Year by the Cambridge YWCA in 1981. Stratton was also a longtime trustee and board chair of Lesley University, from which she received an honorary doctorate in 2004.

While these activities consumed Stratton’s energies and excited her intellect, her family says that her heart lay in South Newfane, Vt., where she and her husband (who died in 1994) bought “Toby Hill,” the family’s summer home, in 1941.

“It is here that Kay exercised her gardening genius, created the ‘jam lab,’ and brought together frequent and joyous gatherings of family and friends,” says her daughter, Cary S. Boyd.

At Kay Stratton’s 80th birthday celebration at MIT, another daughter, Cay Stratton, regaled the audience with Vermont tales of her mother teaching blackjack and poker to the young sisters “to sharpen our computational skills; efficiently dispatching garden-stalking woodchucks with a .22 rifle; and avidly engaging in sport with family and guests — no one is spared the vicious slash of her ping-pong forehand or the merciless drive of her croquet mallet.”

Stratton is survived by three daughters: Cay Stratton, who lives in Chapel Hill, N.C., with her partner, Barry Popkin; Cary S. Boyd, of Newbury, Mass., and husband Lew Boyd; and Laura S. Thoresby, of Kent, England, and husband Jerry Blanchet. She is also survived by a granddaughter, Caroline Boyd Kronley; her husband, Neal Kronley; and a great-granddaughter, Sarah Finch Kronley, all of Brooklyn, N.Y.

Memorial contributions may be sent to the Council for the Arts at MIT or Grace Cottage Hospital in Townshend, Vt. An MIT memorial service will be held Monday, Oct. 27, at 4 p.m., in Wong Auditorium (E51-115). For more information, contact Sis de Bordenave at esdeb@mit.edu.

“Mrs. Stratton became a leading force for the humanities, bringing art onto the campus, launching a lecture series, and holding court each week at her Memorial Drive residence in what those invited came to think of as an elegant salon,” writes Boston Globe reporter Bryan Marquard of the life and legacy of Catherine Stratton, wife of former MIT President Julius Stratton.