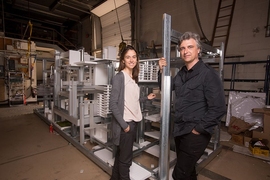 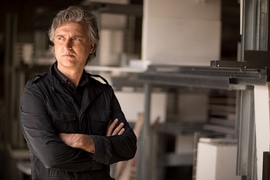 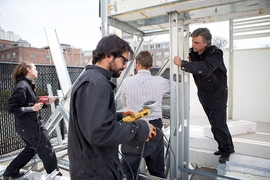 Caption:
Anton Garcia-Abril, a professor of architecture at MIT, and Debora Mesa.

In a parking lot next to a nondescript building on the northern edge of MIT’s campus, dozens of enormous foam blocks sit in piles. These are not discarded pieces of packaging from some industrial construction, however. They are models of buildings, and the parking lot is the workshop of Anton Garcia-Abril, a professor of architecture at MIT.

Along with his partner, Debora Mesa, Garcia-Abril leads a team that often rearranges the blocks into new shapes. Just beyond the fence, traffic roars by on a busy street, trains sometimes roll through on the nearby railroad tracks, and new commercial buildings are being raised a block or two away. Their own building is a former lab for electricity research. It is exactly the kind of setting Garcia-Abril hoped for when he joined MIT’s Department of Architecture last summer.

“When we came here and were invited to participate in the research program, we said, ‘We want a yard,’” Garcia-Abril explains. “We want to build, to test, to feel how spaces comfort you, shelter you, and inspire you.”

What Garcia-Abril, Mesa, and their team want to test, most of all, are new forms for urban structures, potentially made out of prestressed concrete, that can serve a variety of needs for city dwellers. Those foam blocks are the models for buildings that, Garcia-Abril hopes, will become “almost self-constructed systems of materials that could be rapidly assembled and provide you with primary needs.”

In Madrid, where Garcia-Abril and Mesa were previously based, they designed a house for themselves out of pieces of leftover concrete infrastructure, as well as glass; once the elements of the house were assembled, construction took just seven days. That kind of process is what they hope to develop further in Cambridge by expanding their workshop, formally known as MIT’s POPLab, or Prototypes of Prefabrication Laboratory.

“We are trying to match the form of the city with the logic of fabrication,” Garcia-Abril says.

Garcia-Abril grew up in Spain; his father is a composer and professor of music in Madrid. But Garcia-Abril was more strongly drawn to architecture. “I had no point of reference in my family, no previous contact with architecture,” he says. Still, he adds, his father has had a significant influence on him in one respect: “I share this vision of a holistic life that [revolves] around education as a continuous process,” Garcia-Abril says.

Mesa’s parents are surgeons, and she also took a leap into the unknown by studying architecture. “Architecture integrated all those things I wanted to know about — art, science, humanities,” she says. “It was the most fulfilling and complete kind of study I could find.”

After finishing their doctoral theses, Garcia-Abril and Mesa established the Ensamble Studio as their professional practice in 2000. Coincidentally, some of their earliest and best-known built structures involved music: The Music Studies Center in Santiago de Compostela, built in 2002, and the SGAE Central Office (a musicians’ guild headquarters), also in Santiago de Compostela, built in 2009, both use granite to create imposing forms, within which are housed offices and teaching and rehearsal spaces.

“We went to the quarries and we saw where the material was extracted from,” Mesa says. “That experience of going to the origins helped us imagine ways the material could be used. That has impacted the way we look at materials, and the way we assemble them.”

The Hemeroscopium House in Madrid, built in 2009, is imposing in a different way. Garcia-Abril and Mesa collected discarded infrastructure, added copious amounts of glass, and in the process built a large house with classical modernist lines and open spaces. Then they moved in: It became the primary residence for the pair, who have four children.

“As architects, we were interested in the reinterpretation of technology in a different scenario,” Garcia-Abril reflects. “As users, we loved living in an atmosphere of lightness, and transparency, which gives us an amazing feeling of being anywhere in the house and seeing our kids. And as architects again, it was our laboratory. We had the psychological risk of saying, ‘I don’t like it.’ But it wasn’t just us; our friends and family discovered that they liked this space. This has been so essential for our research. That was a discovery.”

The use and reuse of basic infrastructural materials, Mesa emphasizes, helped the pair recognize that “good architecture can be done at a good price.”

Their buildings in Spain have brought the architects considerable recognition. The studio has won a variety of honors, including the Architectural Record Design Vanguard prize in 2005 and the Rice Design Alliance Prize for emerging architects in 2009. In 2013, Garcia-Abril was elected an international fellow of the Royal Institute of British Architects, and was a curator at the Spanish Pavilion at the Venice Bienniale. He was also an associate professor at the Polytechnic University of Madrid before joining MIT.

From foam to concrete

Now settled in Cambridge, showing a visitor their fabrication shop and the building yard, Garcia-Abril and Mesa talk about the advantages of using the huge foam blocks — which had to be unloaded from a tractor-trailer last fall — as large-scale models

“We look at the foam the same way we look at stone or concrete,” Mesa says. For his part, Garcia-Abril hopes to design multiuse structures in the same mode as the Hemeroscopium House, which could be used for living, work, communal gatherings, or for many other purposes that would draw people together in cities.

Whatever structures the architects end up designing, however, Garcia-Abril emphasizes that the inspiration will come from close empirical scrutiny of the urban fabric around them.

“Being an architect means to participate and really be an active part of the world,” Garcia-Abril says. “You cannot be a good architect isolated in a room.” As if on cue, more traffic roars by and horns honk.

“In the end,” Garcia-Abril concludes, “life is our influence, and we use life as our laboratory.”