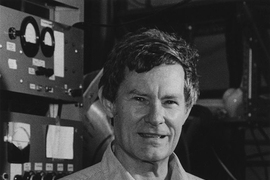 Professor emeritus John G. King ’50, PhD ‘53, an experimental physicist, transformative physics educator, and leader of the MIT Molecular Beams Laboratory in the Research Laboratory for Electronics for 42 years, died on June 15 at his summer house in Wellfleet, Mass. A longtime resident of Cambridge, King was 88. The cause of death was congestive heart and renal failure.

“John was an inspiring teacher and experimentalist. His educational passion was creating hands-on experiments built from ordinary parts you can find at any hardware store, what he lovingly called ‘mulch,’” said MIT senior lecturer in physics, and former King student, Peter Dourmashkin ’76 (physics), ’78 (math), PhD ‘84. “He was MITx before MITx.”

King was born in London and educated in France, Switzerland, and the United States. He came to MIT as an undergraduate in 1943 and completed his undergraduate studies in physics following war service for the U.S. Army, U.S. Navy, and the Harvard Underwater Sound Lab. He joined the MIT physics faculty in 1953. King was named the Francis L. Friedman Professor of Physics in 1974 and retired from MIT in 1996.

King was renowned for his null experiments — those designed to test fundamental principles. He helped develop the atomic clock and invented the molecular microscope. King’s best-known experiment, still found on the first page of most electricity and magnetism textbooks, is the measurement of the charge magnitude equality of the electron and the proton, and the neutrality of the neutron to a 10-20 of an electron charge. King also conceived an imaginative experiment, prompted by cosmological ideas, to set a hard limit on the possibility that matter, over cosmological time, begets new matter, a version of what was once called the steady state cosmology.

Professor of physics emeritus Rainer Weiss ’55, PhD ’62 was a colleague of King throughout his student and faculty years at MIT and considers him to be “one of the most creative and imaginative experimental physicists of his generation.” Both physicists were students of Jerrold Zacharias, who began the Molecular Beam Laboratory at MIT shortly after World War II. Molecular beam experiments measure the properties of individual atoms in a vacuum unperturbed by interactions with other molecules. The technique provides precise and universally reproducible values for the energy levels and other parameters of these quantized systems. King began his work in molecular beams by pioneering new methods to measure the charge and current distributions in the nuclei of the halogens. He discovered the magnetic octupole moment of the common isotope of iodine.

During his years as director and principal investigator of the Molecular Beam Laboratory, King transformed the research conducted there. It branched into molecular beam techniques applied to collective body physics, cosmology, and biophysics. More than 100 undergraduate and 25 doctoral students obtained their degrees working on these topics during King’s tenure at the laboratory.

At a 2000 gathering to celebrate King’s career, Fred Dylla ’71, SM ’71, PhD ’75 described working in the Molecular Beams Lab as “getting your hands dirty and being surrounded by brilliant students who were around all the time.” Dylla is currently executive director and CEO of the American Institute of Physics (AIP), a nonprofit umbrella organization for 10 scientific societies that publishes scientific journals and provides information-based products and services.

Applying atomic beam techniques to biophysics, King invented a molecular microscope using water molecules rather than light as the illuminating projectile. His idea was to map the locations where water would evaporate or stick on small biological samples such as cells with biologically interesting spatial resolution. Working models of the device were developed for some biology labs, though the technique has yet to be widely adopted.

When inventions such as the molecular microscope were not as successful as he had hoped, King attributed the failure to insufficient effort in combining enough money and skilled personnel. Achieving this winning combination required, in his view, an attack on the problem with “ferocious vigor.” Moderate vigor was not enough.

Dissatisfied with the lab exercises used in mid-century physics pedagogy, King worked tirelessly on innovative methods that stressed hands-on learning and independent thinking. In 1966, he initiated the Project Lab, in which students developed their own open-ended research projects. His belief that anyone could “find something interesting to study about any mundane effect” reflects the independent spirit of King’s own early and eclectic science education. He told his students that “the best way to understand your apparatus is to build it.”

As an adviser, King quickly became a project participant. Charles H. Holbrow, professor of physics emeritus at Colgate University and currently a lecturer at MIT, recalled that King had “the wonderful gift of seeing physics in everyday phenomena and turning these into research projects.” Some 2,000 MIT undergraduates experienced Project Lab.

Approached by a student seeking a thesis experiment or a colleague with an idea, King would, before long, be sketching ideas on the backs of envelopes, estimating orders of magnitude, and offering ideas on how to build and run the experiment.  Fred Dylla’s own undergraduate thesis with King was designed to determine the difference in charge between an electron and a proton. Still considered a highly sensitive measurement, the experiment utilized $20 worth of equipment.

A King student from his MIT sophomore year through graduate school, Samuel A. Cohen, director of the Program in Plasma Science and Technology at Princeton University, learned how to operate a drill press and to build his own electron multipliers. At the same time, he was being influenced by King’s ideas. He says, “John’s mind kept jumping decades ahead, from atomic beams to superfluid He3 to molecular microscopy — always decades ahead.”

King believed that an understanding of fundamental science concepts should extend beyond physics course curricula. For years he championed the creation of a “Corridor Lab.” Never entirely realized at MIT (a couple of experiments now grace the Infinite Corridor), Corridor Lab would have placed 100 experiments, each demonstrating a scientific principle, along the miles of MIT hallways. Anyone passing could interact with an apparatus; faculty members could send students to experiment with them; and other departments could participate. King envisioned similar modules in a wide range of venues to further public understanding of science.

With other educators in the late 1950s and ‘60s, King worked on the revitalization of high school physics, following the startling realization on the part of Zacharias that “while students had taken physics, they didn’t understand anything.” When the 1957 launching of Sputnik spurred a nation-wide alarm and allocation of money to improve science teaching, King became deeply involved. In cooperation with the influential Physical Science Study Committee (PSSC), he produced — and acted in —eight physics movies, including “Times and Clocks,” “Interference with Photons,” “Size of Atoms from an Atomic Beam Experiment,” and “Velocity of Atoms.” One of the films featured King demonstrating a principle of physics by driving one of the Bugatti automobiles he had meticulously restored down the Massachusetts Turnpike at high speed.

A lengthy 2009 interview for the Center for History of Physics at the American Institute of Physics shows King’s ongoing interest in science as a basis for a healthy and rewarding intellectual life. Speculating on the significance of the earliest point on the educational spectrum, he proposed that each child at birth be equipped with a kit of simple tools (balls, funnels, etc.) designed to stimulate a life of joyful investigation. A more advanced set of gear would be universally furnished at age six.

A life of invention

Family, friends, and colleagues paint a portrait of an energetic, curious, and engaging man who applied these characteristics equally to his intellectual, professional, and personal lives. King’s wife, Jane Williams, recalls him as “interesting, imaginative, ingenious and lots of fun.” In addition to his enthusiasm for physics and the value of science as the basis for understanding the world around us, she says, he was throughout his life “passionate about classical music, poetry, and any kind of dictionary. Since his early years were spent in France, he cared about things French, including French wines.”

King’s French stepfather introduced him to the tinkering that informed much of his approach to science, especially science teaching. As a high school student at Phillips Exeter Academy, he had his own laboratory. In life, as in science, he remained a relentless tinkerer, once rebuilding a bus, complete with bunks, to transport his large family to the farm in Woolwich, Maine, where he and his first wife, Elizabeth, lived for many years. She and several of their eight children still live in or around Woolwich.

King was the recipient of many honors and awards for contributions to physics and physics education. These include the Alfred P. Sloan Award (1956), the AAPT Robert Millikan Medal (1965), the E. Harris Harbison Award (1971), and the Oersted Medal (2000), the most prestigious award of the American Association of Physics Teachers. His numerous publications include co-authorship with Paul Gluck of Jerusalem of “Physics Project Labs,” (Oxford University Press) to be published in fall 2014.

In addition to his wife, King is survived by a daughter, Martha, and sons Andrew, James, Charles, David, Benjamin, and Matthew; granddaughters Sara, Katy, and Lily; stepchildren Cynthia, David, Catherine, and Nicholas; and eight stepgrandchildren. His oldest son Alan predeceased him.

A memorial service will take place at MIT in October.

Boston Globe reporter Bryan Marquard memorializes the life and work of MIT Professor John G. King. “John G. King wanted students, and essentially everyone else, to watch science unfold before their eyes. It was, he believed, the only way to truly learn a subject,” Marquard writes.