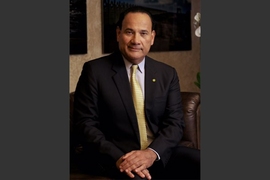 Caption:
Prince Charles presents Mohammed Abdul Latif Jameel ’78 with an honorary knighthood in an investiture ceremony held at the British Embassy in Riyadh, Saudi Arabia, on Feb. 12, 2015. Speaking after the investiture, Jameel said: “It is a great honor to have received this award from His Royal Highness The Prince of Wales. I would like to thank my family, my colleagues at Abdul Latif Jameel Community Initiatives and our partners across the globe for their hard work and support in running the numerous programs that help make such a difference to the lives of so many.”
Credits:
Courtesy of Abdul Latif Jameel International

Mohammed Abdul Latif Jameel ’78, a successful businessman and benefactor of causes including programs at MIT for poverty alleviation and food and water security, will receive an honorary knighthood from Queen Elizabeth II. Jameel is a lifetime member of the MIT Corporation, the Institute’s governing body.

The honor was announced on Monday by the British Embassy in Riyadh, Saudi Arabia, Jameel’s home country, in recognition of his philanthropic activities and his support for development of arts and culture in the United Kingdom.

In announcing the award, John Jenkins, the British ambassador to Saudi Arabia, said, “His business successes are well documented, as are his philanthropic activities. This award is in recognition of his contributions to strengthen the role of the arts and culture in society. … I congratulate Mr. Jameel on this well-deserved honour.”

In a statement, Jameel said, “This award is a great honor for my family and me, and also reflects the hard work and support of the hundreds of ALJCI [Abdul Lateef Jameel Community Initiatives] team members who run the numerous programs that help make such a difference.”

Jameel earned his SB in civil and environmental engineering at MIT in 1978. He created the Abdul Latif Jameel Poverty Action Lab (J-PAL) 10 years ago to bring a rigorous, evidence-based approach to poverty-alleviation programs around the world. In those 10 years, the program has affected more than 164 million people, according to J-PAL.

Earlier this year, Jameel created the Abdul Latif Jameel World Water and Food Security Lab (J-WAFS) at MIT, to spearhead research aimed at combatting shortages of food and water in the face of climate change and population growth. A gift from ALJCI in 2011 allowed MIT's D-Lab to establish the Scale-Ups program, which identifies and supports technologies, services, and ventures with potential for wide-scale poverty alleviation in lower- and middle-income countries.

“Mr. Jameel has helped to foster innovative, high-impact approaches to some of humanity’s most pressing problems,” MIT President L. Rafael Reif said. “His work to alleviate poverty and to help ensure reliable sources of water and food for a rising population reflects MIT’s values — and puts them into practice. I am very pleased to see my friend honored for his service.”

The title of Honorary Knighthood in the Most Excellent Order of the British Empire is bestowed on people who are not citizens of the U.K. or commonwealth nations to recognize those who, through actions in their daily lives, have demonstrated values such as benevolence, commitment, compassion, tolerance, and a drive to effect positive social change. Previous MIT recipients of this honor have included electrical engineer and inventor Vannevar Bush PhD ’16, who served as MIT’s dean of engineering in the 1930s before going on to lead the U.S. Office of Scientific Research and Development during World War II, and alumnus Cecil Green ’24, SM ’24, a founder of Texas Instruments.