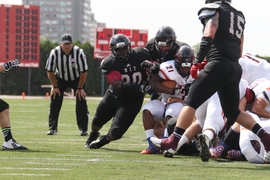 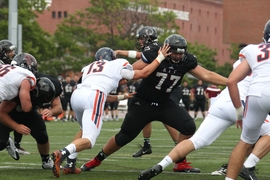 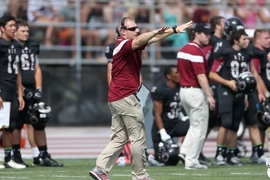 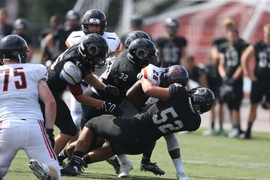 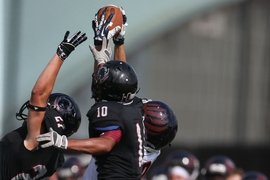 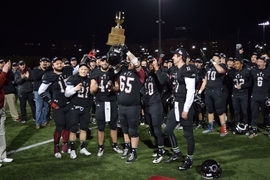 Last Saturday, with a 24-13 victory over the U.S. Coast Guard Academy, the MIT football team made history, achieving its first-ever nine-game undefeated regular season — and MIT’s first perfect football season since going 3-0 in 1881.

This weekend, the Engineers reach another milestone: their first postseason game ever, against 8-1 Husson University in Bangor, Maine.

“It’s been a great ride so far,” Head Coach Chad Martinovich told the The Boston Globe. “Really it’s a tribute to the kids on the roster, the seniors in particular. When they came in as freshmen, they were 2-7 and they’ve helped really improve the program each year, along with the three recruiting classes since then.”

Two decades after that last undefeated season, MIT’s football program was disbanded in 1901. Resurrected as a club sport in 1978, the team only regained varsity status in 1988. Over the next 20 years — before Martinovich’s arrival in 2009 — MIT Football managed only five winning seasons, compiling a record of 65-115-1.

But by the start of the team’s 2014 season, there was reason for optimism: The Engineers were coming off a 6-3 campaign in 2013, their best since 1999. The squad also had its best-ever showing in the New England Football Conference (NEFC) last year, finishing with a 4-3 record.

Picked to finish fourth in the NEFC in a preseason poll of the league’s head coaches, MIT opened this season with early-September wins against Pomona-Pitzer College and Becker College. In their first conference game of the season, on Sept. 27, the Engineers faced one of the preseason favorites: Salve Regina University. With senior running back Justin Wallace contributing four touchdowns, MIT routed the Seahawks, 48-26, moving to a 3-0 start for the first time since the program regained its varsity status.

In the very next game, the Engineers faced another test against Curry College, who they had not defeated since 1997. But Wallace ran for 196 yards and freshman linebacker Mitch Turley returned an interception 86 yards en route to a 49-20 victory.

The most dramatic moment of the season came on Oct. 25, when MIT hosted Western New England University: Both teams entered the game undefeated. In front of a capacity crowd at MIT’s Henry G. Steinbrenner Stadium, the Engineers jumped ahead early, but the Golden Bears made a late run and — with 42 seconds left —scored a touchdown that left them just an extra point shy of tying the game. On the extra point attempt, sophomore Anthony Emberley broke through the left side of the Western New England line and blocked the kick to preserve a thrilling 35-34 win.

Another signature victory came the next week at Endicott College — the preseason favorite to win the NEFC and a team that MIT was 0-11 against all-time. On a cold and damp early-November night, MIT jumped ahead 21-2 in the second quarter on the strength of three touchdowns from Wallace — but Endicott surged back with three consecutive touchdowns of their own in the second half, taking a one-point lead early in the fourth quarter. The Engineers responded and produced the winning score on a pass from senior quarterback Peter Williams to junior wide receiver Chris McPherson with eight minutes left, producing a 34-29 win.

MIT faced adversity on the road the next week as well, falling behind Maine Maritime Academy 29-21 at the half. But the Engineers rallied for another comeback win, scoring five second-half touchdowns — four by Wallace — to pull away for a 55-37 victory. The win clinched the NEFC title for MIT, and with it an automatic bid to the 2014 NCAA Division III Football Championship.

A day after wrapping up their perfect regular season with last Saturday’s win against the U.S. Coast Guard Academy, the team gathered in Rockwell Cage to watch the NCAA Selection Show. As the list of 32 teams was revealed, MIT learned that it would travel to Maine to play the first NCAA playoff game in the history of the program at Husson University on Nov. 22.

After the football season ends, what does the future hold for these student-athletes — many of whom have majors like electrical engineering and computer science, mathematics, and aerospace engineering?

As journalists from the likes of The Wall Street Journal, Reuters, and The Boston Globe have come calling over the past week, Martinovich has had a ready quip: “There’s probably a better chance of most of these kids owning an NFL team than playing for one,” the smiling coach told CBS News.

The Boston Globe reports on the MIT football team’s victory in the first round of the NCAA Division 3 playoffs. The Engineers kicked a field goal to force overtime, “then got a 13-yard touchdown pass from Peter Williams to Seve Esparrago to pull out a 27-20 victory over Husson.”

Wall Street Journal reporter Ben Cohen takes a look at the revival of the MIT football program, which after being disbanded in 1901 was resurrected as a student-run squad in 1978. “They deserve a lot of credit for where we are today,” says MIT President L. Rafael Reif of MIT’s founding football players.

Boston Globe reporter Kevin Dupont writes about the winning attitude behind the MIT football team’s first-ever undefeated season. “I am out here to have fun. It is what drives me . . . to finish my work, and go to the exams, do all the work,” said Anthony Souffrant, a senior defensive back for the Engineers.

Ron Mott of NBC News reports on the MIT football team and its first undefeated season. “It’s not hard to motivate them because they are very intelligent, very motivated, very passionate about what they are trying to accomplish in every facet of their lives,” says Engineers Head Coach Chad Martinovich.

Rheana Murray of ABC News spotlights the undefeated MIT football team. "It's nice to see our players get this kind of attention for what they're doing on the field because they are all-stars, if you will, off the field," says Head Coach Chad Martinovich. "I am really proud of them and happy for them."

“Really it’s a tribute to the kids on the roster, the seniors in particular. When they came in as freshmen, they were 2-7 and they’ve helped really improve the program each year, along with the three recruiting classes since then,” says Head Coach Chad Martinovich of the MIT football team’s perfect season.

Sam Gardner writes for Fox Sports about the MIT football team’s first undefeated season. “Academics are always going to be the most important thing at this place, but you can excel in other things and be an MIT student,” says Coach Chad Martinovich.

Vladimir Duthiers of CBS News reports on the MIT football team’s undefeated season. The team’s head coach, Chad Martinovich, says of the Engineers that, “whether it’s academics, athletics, research, clubs, activities, whatever it is they do, they look to excel.”

Steve Ginsburg of Reuters writes about the success of the MIT football team. “With 81 Nobel laureates having ties to MIT, the perception of the student body is one of bookish scholars. With 33 varsity sports, however, there aren't just a bunch of academics walking around the Cambridge campus just outside Boston,” writes Ginsburg.

Wall Street Journal reporter Ben Cohen writes about the undefeated MIT football team, which has clinched a spot in the Division III playoffs. Cohen writes that while MIT is known for coming up with “scientific advances that change the world,” the school is now “inventing a respectable football team.”

From cancelled to champions: The strange history of MIT Football