Fast, cheap, and under control 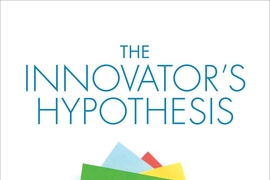 ↓ Download Image
Caption: “The Innovator’s Hypothesis,” published this month by the MIT Press.

Caption:
“The Innovator’s Hypothesis,” published this month by the MIT Press.

When it comes to prescription drugs, patient “compliance” is a concern: Are people, especially the elderly, taking their medication on the proper schedule? While pharmaceutical firms focus on the research and development of drugs, knowing more about patient habits might, at a minimum, help those firms make the case for the effectiveness of their products.

Perhaps, then, some firms could benefit from a few experiments designed to help them learn more about their end-users: low-cost interventions that might involve, say, giving customers the opportunity to provide useful feedback about their habits. Indeed, small-scale business experiments designed from within might be the most valuable innovation investments most organizations can make, according to a new book on the subject.

“The purpose of an experiment is not to solve the problem, but to generate insights,” says Michael Schrage, a research fellow at the MIT Sloan School of Management, and a member of the school’s executive education teaching faculty. Moreover, Schrage claims, some businesses may discover a kind of power law of experimental knowledge: “If you design your experiments [to be] simple, frugal, and fast, you frequently can capture 80 percent of the useful insights you need for 20 percent of the time and money you’re used to investing.”

Now in his new book, “The Innovator’s Hypothesis,” published this month by the MIT Press, Schrage fleshes out the idea of “5x5” experiments as a useful tool for business innovation: having a diverse team of five employees come up with five experiments that can be tested within five weeks, for under $5,000 each.

To be sure, the notion of the 5x5 experiment bears some relation to famous business practices of the past, such as Toyota’s effort to implement “continuous improvement” from within, or more recent tech-sector initiatives to give employees a portion of work time devoted to firmwide innovation. But Schrage wants to go beyond the incrementalism of continuous improvement.

In his book, however, Schrage focuses on the specific parameters of the 5x5 idea, contending that many business practices can be tested effectively, and relatively cheaply, using this specific model. For instance, the idea of persuading airline passengers to volunteer to be bumped from their flights, for compensation, he notes, dates to at least 1968, when an economist first suggested it — but the practice wasn’t widely implemented until the late 1970s. Small-scale tests could have shown the value and feasibility of the idea much sooner than that.

But for a specific 5x5 experiment to have value, Schrage notes, it needs to yield useful information, no matter what the result is. As Schrage describes in the book, he himself thought it would prove valuable for airlines to charge more to passengers who wanted to sit together in groups of more than two — but in online-booking tests, air travelers resist paying more for seats in order to be grouped together. Still, that’s a useful and practical piece of knowledge for airlines and travel companies to have.

In that vein, getting employees to see that their own ideas might not reach fruition, Schrage believes, may be the most difficult thing about getting the 5x5 method to take hold within a firm.

To make the 5x5 effort work, Schrage also recommends that employees think specifically about which executives might be most receptive to certain innovations, or the experimental method as a whole, while trying to affect change at their firms. No innovation methodology, he believes, can escape corporate politics and culture.

“The not-so-hidden agenda [of the method] is to provide a new opportunity for alignment between the visions and aspirations of [executives] and the people who actually do the work and interact with clients and customers,” Schrage says. “It creates an opportunity to engage with top management.”

“The Innovator’s Hypothesis” has received notice from scholars and business leaders alike; Dan Ariely, an economist at Duke University, calls it “a practical guide for a simple and promising way to force ourselves to do better for ourselves, our customers, and society as a whole.”

The general approach, Schrage thinks, can also improve a firm from within in other ways, by further tapping the insights and talents of a firm’s employees, and perhaps even help morale in the process.

“The real value isn’t just in terms of innovation portfolios,” Schrage asserts. “It’s in helping boost the human capital, the creativity, the innovative capacity of individuals who participate,” Schrage says.

Know thy banker — it could keep you solvent