Mentoring: It's the network 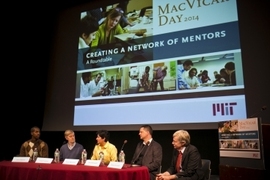 At the MacVicar Day symposium on March 14, physics professor Nergis Mavalvala shared a recent email with the audience, using assumed names to protect the innocent.

“Dear Professor X: Thank you very much for encouraging me to talk to Professor Y at the beginning of the semester about a UROP," she said. "I will now be doing a theoretical astrophysics project on tides and stars orbiting near black holes. I’m really looking forward to this and greatly appreciate your help. Sincerely, Student Z.”

Dean for Undergraduate Education Dennis Freeman moderated the event. MacVicar Day is an annual celebration of the new MacVicar Faculty Fellows, chosen for excellence in undergraduate teaching. Before diving into the program, Freeman recognized the 2014 Fellows, whose names were revealed that morning.

In addition to Mavalvala, speakers included David Darmofal, a professor of aeronautics and astronautics; Leslie Norford, a professor of architecture; and MIT senior and chemical engineering major Justin Bullock.

Freeman began by noting that, more than ever, advisees are looking to their faculty advisors to help them address a smorgasbord of issues, from course selection and career advice to coping with personal problems. Moreover, the 2011 Enrolled Student Survey revealed some “troubling” statistics: Only 20 percent of students felt they received enough faculty interaction during their time at MIT, and only 40 percent of seniors reported they knew three or more faculty well enough to ask them for a letter of recommendation.

Freeman said he strongly supports the network idea. “It’s impossible for any individual to be an expert on all of those things,” he said, referring to the “long laundry list” of issues students turn to advisors for. By developing a network of mentors, students connect with individuals with specialized knowledge or experience who can better address their questions. This also naturally leads to more opportunities for faculty interaction. In addition, the network concept has a built-in “scaling” effect. As a student adds a new mentor to his or her network, the student essentially adds that mentor’s network. “Just by adding a few nodes you can add an enormous number of resources for everybody’s students,” he said.

David Darmofal is also is a “big proponent” of the network idea. “I don’t see that we can be a one-stop shopping as an advisor or mentor,” he said. Instead, “we serve as entry points into a community.”

“I think students play an equally important part of this network,” Darmofal noted. At times, students express concern to him about another student who is struggling in class. He can then approach the student to offer help, or direct them to other campus resources like Student Support Services.

'Shut up and listen'

In her remarks, Nergis Mavalvala described the two principles she abides by as an advisor and mentor. One is that she tries to get to know her advisees on a personal level. “If you don’t know a person and … what makes them tick, it’s really hard to then guide them into the best directions they can go in.” The other principle is simple: listen. “I can’t really say the right thing before I know if I’ve really heard what the person is asking me for. So that’s my second rule: To know a person you have to just shut up and listen,” she said with a laugh.

Mavalvala also alluded to the fact that students are not the only beneficiaries of the network; faculty do, too. "If I were Professor Y, I would love an e-mail from a colleague who will tell me, 'This is a student you should really pay attention to,'" she said.

For Leslie Norford, “the network is kind of project-based learning,” working together without the unspoken hierarchy between faculty and students. One example is the freshman seminar, where they build and test objects like go-carts, “trying not to crash them into faculty cars in the main lot.” (It has happened.)

Students have also worked with Norford on projects in developing countries, like building schools in Africa and Zimbabwe, in collaboration with NGOs. As the mentor-mentee relationship has developed, Norford noted, “the students have pretty much taken over. The NGOs don’t even send e-mail to me anymore; they go to the students . . . they own it, and nothing could make me happier.”

The final speaker, Justin Bullock, shared his perspective as a student on the value of having a network of mentors. He described his three primary mentors — his cross country coach, Halston Taylor; his Simmons Hall housemaster, John Essigmann, a professor of chemistry; and his Course 10 advisor, Kristala Prather, a professor of chemical engineering — and how they’ve helped him navigate ups and downs at MIT.

“What can we take from all three of these people?” he asked. “Every single person I’ve mentioned has repeatedly expressed to me the fact that they are willing to talk to me … when I have issues or when I just want to talk.” In addition, he said, “I think developing a mentor-mentee relationship is a lot like any other relationship.” While it might be awkward at first, as you get to know them over time, you get comfortable with that person. “It’s really just natural, and you have no hesitation about going to talk to them. And that’s something I really appreciate about my relationships with all three of these people.”

After the presentations, Freeman asked the panelists and the audience — many of them faculty — to brainstorm ways to create a mentoring network. Facilitating more student-faculty interaction was a common theme. Freeman described the freshmen-faculty receptions held last fall as one example of a successful new initiative. At each reception, faculty briefly introduced themselves, which helped break the ice for students to chat with them. “People were very engaged,” he said. Mavalvala agreed, saying the introductions gave students a “point of connection” to the faculty.

Bullock said the UA-sponsored student-faculty dinners are “really awesome,” but faculty need to consider timing; scheduling a freshman-faculty dinner two weeks into the term is “the worst time ever,” because freshmen are trying to do p-sets and read every word in their textbooks. In contrast, “if you asked seniors to go the first two weeks of school, they’d be like, ‘Yeah, sure!’”

Another idea that emerged from the conversation was getting more faculty involved with students outside the classroom. Institute Community and Equity Officer Edmund Bertschinger said programs like ESG, Concourse, and LeaderShape are a great way to meet students and understand student culture better. “Take advantage of some of the existing programs, because you will really value your experience as a faculty member having done so.” Dean for Undergraduate Research Kim Vandiver added that serving as an advisor to a varsity team, as he has done for nine years, is another rewarding way to interact with students. Whatever the venue or program, faculty need to get the message that “service to our undergraduates’ education outside the classroom is valued by department heads and deans,” he said.

The notion of leveraging ready-made networks — like alumni, upperclassmen, or graduate students — resonated with a number of people. Vandiver relayed that at a recent event for young alumni and students in the Edgerton Center, many alumni asked him, “How can we help?”

Tomás Lozano-Peréz, a professor of electrical engineering and computer science, said he gets to know his undergraduate TAs in 6.01 quite well, and their involvement in class builds a student-to-student network. If we could “grease the wheels a little bit, have more undergraduate TAs,” he said, it would provide many more opportunities for students to connect.

Many people agreed that graduate students are another resource. Jacopo Buongiorno, an associate professor of nuclear science and engineering, suggested assigning a grad student mentor to each undergrad. Prather said, “This idea about connecting undergraduates with grad students is something we need to seriously consider.” Based on her own experience, first as a grad student and now as an advisor, she’s noticed that “students talk to each other in different ways,” and can benefit from talking to someone else closer in age and experience. “We can tell them what they need, but they don’t always believe us because we’re old, and uncool, and unhip, and [our] world is different,” she said. “A lot of times our students will hear differently the same things we’re saying to them if it comes from a different voice.”