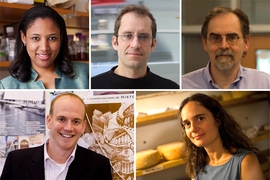 Founded in 1992, the MacVicar Faculty Fellows Program was created to honor the legacy of Margaret MacVicar, an MIT alumna and professor of physical science who served as the Institute’s first dean for undergraduate education, from 1985 to 1990. MacVicar is credited with numerous far-reaching educational initiatives, including the Undergraduate Research Opportunities Program (UROP). Founded in 1969 — when MacVicar was just 26 and in her first year on the MIT faculty — the program has since been emulated worldwide.

The nomination process for the program is highly rigorous and requires supporting letters and extensive documentation from multiple sources, including department heads, faculty, current students, and course evaluations. Provost Martin A. Schmidt selected the Fellows, with input from an advisory committee of faculty and students chaired by Dean for Undergraduate Education Dennis M. Freeman. Fellows receive $10,000 annually for a period of 10 years to support their undergraduate teaching. With the addition of the 2014 Fellows, the program now sponsors 41 professors.

Today, MacVicar Day, the Institute will honor the Fellows and celebrate excellence in undergraduate education at a symposium titled “Creating a Network of Mentors: A Roundtable.” Four professors and one student will share their perspectives on freshman mentoring and advising. Freeman will moderate the panel and introduce the 2014 Fellows. Speakers include David Darmofal, a professor of aeronautics and astronautics; Nergis Mavalvala, the Curtis and Kathleen Marble Professor of Physics; Leslie Norford, a professor of architecture; Stephen Tapscott, a professor of literature; and MIT senior and chemical engineering major Justin Bullock.

Buongiorno says that he sees teaching as “a real opportunity to shape the intellectual development of these young minds,” particularly on fundamental concepts like the second law of thermodynamics. “It’s an experience that affects the way they will look at the physical world for the rest of their lives. That’s quite exciting, for them and me as well.”

“Also,” he says, “transmission of knowledge, [like] that moment when you see a spark in their eyes, when they ‘get it,’ is just exhilarating — a true joy for the teacher, a key reason why I chose a career in academia.”

Students appreciate Buongiorno’s love of teaching, his creativity, and his high standards. One student wrote, “Professor Buongiorno creatively developed demonstrations to make even the most tedious concepts … highly engaging” and provided examples of esoteric concepts that “make theoretical material relevant.” Another noted that the “authentic passion he displays promotes a classroom climate that never once leaves room for boredom, and stimulates students to live up to his tremendously high standards of excellence.”

Buongiorno’s colleagues admire his teaching style. One of them cited his ability to help students apply what they learn “to a wide range of real-world situations.” Another called Buongiorno “an amazing and gifted teacher … I have been inspired by his pedagogical style, his amazing lecture notes, and have adapted some of his methods in my own teaching.”

Lozano-Pérez completed his SB, SM, and PhD degrees in electrical engineering and computer science at MIT in 1973, 1977, and 1980, respectively. He worked at the Artificial Intelligence Lab as a research staffer from 1973 to 1974 and became a research scientist in the lab in 1980. Lozano-Pérez was appointed as an assistant professor of computer science and engineering in 1981; as an associate professor in 1984; and as a professor in 1991. He served as associate head of the Department of Electrical Engineering and Computer Science from 1998 to 2001, and was named the School of Engineering Professor of Teaching Excellence in 2009.

“I love helping students learn,” Lozano-Pérez says. “It’s incredibly rewarding. For the last 15 years I’ve been exploring how to blend computer-based tools with personal interaction to help students learn. It’s exciting to see so much recent activity in this area at MIT.”

Lozano-Pérez’s experimentation with online learning has been groundbreaking, according to his peers. “In 1999, way before the online education craze, he spearheaded a revolution in 6.001,” one colleague said, developing an online tutoring system and a new teaching strategy emphasizing small, interactive recitations coupled with innovative online lectures. It was such a novel approach that Lozano-Pérez “didn’t have a name for the style; now we would call it a ‘flipped classroom.’”

Another colleague described Lozano-Pérez as “a superb educator: He is one of the most innovative and deepest thinkers about pedagogy and curriculum at the Institute.” His commitment to students, the colleague added, “creates a learning environment … that has an enormous impact on students’ knowledge, but also their self-confidence.”

“He is upbeat, has a … sense of humor, and has a magical ability to present complicated material in a clear and understandable manner,” wrote one student. Another found Lozano-Pérez’s passion for solving problems inspiring, adding that he creates a learning environment where students “are not intimidated” and “feel worthy,” which makes them “curious and courageous.”

Prather earned her SB in chemical engineering at MIT in 1994 and her PhD in the same field at the University of California at Berkeley in 1999. In 2004, she joined MIT’s chemical engineering faculty as an assistant professor, and in 2011 she was named the Theodore T. Miller Associate Professor of Chemical Engineering.

“I know quite well how transformative the MIT experience can be,” Prather says. Now, as a professor, she strives to “return some of the inspiration that I received — to students in the classroom, UROPs in my research lab, my advisees (formal and informal!), and those who don’t fit neatly into any of the above categories. I want these students to know that I have been further inspired by each of them. I look forward to many more years of teaching and learning from them.”

Students call Prather a “natural” in the classroom who “deeply influences” many students. They value her “open and interactive environment,” her ability to explain complex concepts clearly, and her knack for using humor in her lectures, “making them engaging, interesting, lively, and fun.” A UROP student who worked with Prather for several semesters wrote, “I can attest to her incredible mentorship capabilities, her effectiveness as a reachable and helpful principal investigator, and a fantastic role model.”

One colleague noted that students respond to Prather’s personalized attention “in ways that continue to astound and impress me.” Another characterized her as “smart, energetic, enthusiastic, productive, and articulate. She cares deeply about research and teaching, takes mentorship responsibilities very seriously, contributes time and energy to the community, and is a terrific colleague.”

Ian A. Waitz, dean of the School of Engineering, says that Buongiorno, Lozano-Pérez, and Prather “share a deep dedication to excellence in undergraduate education. They represent the very best of MIT — exceptional researchers and scholars who are also exceptional teachers. All of us, and most especially the students, benefit immensely from having them as members of our community."

“I have always considered teaching to be one of the very most important things that we do at MIT and I’m incredibly grateful for this recognition,” Ochsendorf says. “I benefited from exceptional teachers throughout my own career as a student and I am really trying to live up to the golden standards that my former teachers have set for me.”

Ochsendorf’s peers say his background in archeology and civil engineering positions him to think across disciplines. “He has a rigorous intellect with a deep knowledge of engineering, design, and history in a combination that is rare,” wrote one colleague. “Pair those qualities with a lively and generous spirit, and he is exactly what people imagine when they think ‘MIT.’” As an adviser, added another colleague, Ochsendorf’s “capacity to bring out the best in our top students … is truly a thing to behold.”

Students also laud Ochsendorf’s mentoring style. “Both in and outside the classroom John has been an incredible mentor,” wrote one student, “encouraging me to direct my own learning, inspiring me to believe in myself, and enabling me to dream bigger than I ever thought possible.” Another student noted that Ochsendorf “always insists that he learns more from his students than he could teach.” Setting this example of lifelong learning is “the most valuable mentoring and instruction he provides.”

"I am very happy John Ochsendorf received this well-deserved acclaim,” says Adèle Naudé Santos, dean of the School of Architecture and Planning. “He is an inspirational teacher, a brilliant scholar, and a fantastic colleague. While at MIT John has been very community-oriented and has done many things — both in and outside of MIT — in the service of greater understanding.”

“I love teaching,” Paxson says. “It’s why I went into academia in the first place. It’s immensely gratifying to be recognized for work in this fundamental — if sometimes overlooked — realm of our professional life as professors.”

Paxson’s passion for teaching is abundantly clear to her students. One of them highlighted her “excellent” ability to lead discussions in which students were “wonderfully engaged with her, with one another, and with the material.” Another recalled that, from the first day of class, it was obvious that Paxson “was not only a passionate teacher, but a powerful female role model who I wanted to get to know outside the classroom as well.”

Other faculty members have also been impressed by Paxson’s gift for teaching. “Heather has earned a reputation among undergraduates as a caring and innovative teacher,” observed one colleague. “Her classes [are] known for the manner in which she makes social science concepts accessible and relevant to her students’ everyday lives.” Another described her classes as “filled with adventure, exploration, and hands-on and creative assignments.”

“Heather is a teaching and mentoring superstar,” says Deborah K. Fitzgerald, the Kenan Sahin Dean of Humanities, Arts, and Social Sciences. “Through her dedicated and imaginative efforts, she consistently brings out whatever is best in each student, helping them excel in understanding the logic and illogic of our worlds. Her students report feeling challenged and supported in their work, in exactly the right combination.”