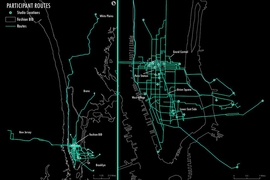 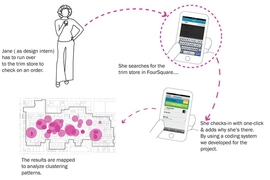 Caption:
Shown here are the apparel firm locations and tracked movements of fashion workers in the New York metropolitan area over a two-week period.
Credits:
Images courtesy of Sarah Williams and Georgia Bullen

Caption:
Researchers used the social networking app Foursquare to track the movements of fashion workers at apparel firms in the metropolitan area.
Credits:
Images courtesy of Sarah Williams and Georgia Bullen
A new study shows New York fashion designers don’t just flock to trends: They also do nearly all their business within the confines of the city’s historic Garment District.

Study co-authors Sarah Williams of MIT’s Department of Urban Studies and Planning and Elizabeth Currid-Halkett of the University of Southern California’s Price School of Public Policy used the social networking app Foursquare to track the movements of fashion workers at apparel firms in the New York metropolitan area over a two-week period — an unprecedented use of social media and smartphones for such research.

Their study, published today in the journal PLoS ONE, bears on the larger issue of proximity in urban economies, and suggests that having clusters of firms remains essential to economic activity — whether in New York or in rebuilding cities such as Detroit and Buffalo.

The study’s authors found that 77 percent of all trips made by fashion designers across the region, and 80 percent of business-related trips, were logged within the boundaries of the Garment District, showing the important role of the district in the production of their products.

“Previous research has argued that proximity matters, using interviews and empirical research as evidence, but this study is the first where we were able to track where the workers were going in real-time,” says Williams, who is the Ford Career Development Assistant Professor of Urban Studies at MIT. “The result was a minute-to-minute account of the interworking of the industry.”

As New York’s Fashion Week kicks off, the research is particularly relevant as the city’s fashion industry takes center stage.

“You’re not just preserving eight blocks of Manhattan, nor is this some romantic throwback to the city’s history,” says Currid-Halkett, an associate professor of public policy at USC. “Even in the 21st century, the benefits that we thought might be most exclusive to those in the Garment District actually spill over much more than we think across the metropolitan region, and on a daily basis. As cities, we should take these districts very seriously and invest in them as a very viable and impactful economic development and competitive advantage.”

The study shows that space still matters, the researchers say. Economic clusters have long been shown to offer businesses economies of scale and scope; the benefit of creative synergies; shared resources and up-to-the-minute awareness of industry innovations; and intimate knowledge of competitors’ efforts. But some have argued that the rise of telecommuting diminishes the need for physical proximity and that industrial clusters like the Garment District — an area of prime real estate with protective zoning — should be relocated or even dispersed, especially given the decline of apparel manufacturing in the United States.

“Williams and Currid-Halkett use data from the very technology that is often said to bring about the ‘death of distance’ to show that distance and proximity — being together — still matter for the most innovative parts of the economy,” says Michael Storper, a professor of economic geography at the London School of Economics and professor of urban planning at the University of California at Los Angeles. “They are pioneering the use of new forms of data to peer into the inner workings of the economies of cities today.”

Partial funding for the research was provided by the Rockefeller Foundation.