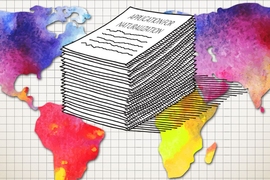 Immigrants to the U.S. with job offers often apply for work authorization. But immigrants from Latin America are less likely to have those requests granted than are immigrants from other regions, according to a new study conducted by scholars at MIT and Brown University — a study that also suggests a potential remedy for this problem, by finding that this regional disparity does not exist when officials examine cases in greater detail.

“This could have significant implications for both understanding inequality [in immigration], and also how to think about testing solutions that will mitigate some of these demographic biases,” says Emilio J. Castilla, an associate professor at the MIT Sloan School of Management, and co-author of a new paper detailing the findings.

Ben A. Rissing PhD ’13, who is the corresponding author of the paper, conducted the work with Castilla. Rissing began collecting data for the study while at MIT; he is currently a visiting assistant professor at Brown.

Intriguingly, the researchers also found that the pattern of a higher rate of rejection for Latin American applicants is not present for instances in which the U.S. government conducted an “audit” of the labor certification application — that is, when agents evaluated the application using detailed supporting documentation. In those cases (about 13 percent of the total) there is no evident pattern of regional inconsistency in the work authorization decisions.

“We find that when the government audits applications and collects detailed supporting documentation for some of these individuals, it becomes a very fair process,” Rissing says. “We don’t see differences in that regard based on individuals’ countries of citizenship.”

The paper, “House of Green Cards: Statistical or Preference-Based Inequality in the Employment of Foreign Nationals,” appears in the latest issue of the American Sociological Review.

To conduct the study, Castilla and Rissing examined roughly 198,000 labor-certification requests with the U.S. Department of Labor, filed from June 2008 through September 2011. The requests are one key initial stage in the granting of most employment-based green cards. Those cases involved immigrants from 190 countries and about 68,000 U.S. firms offering jobs to the immigrants. All cases are reviewed by federal officials working in the same location.

Immigrants from Asia represented about 66 percent of the roughly 198,000 applicants, and Latin America about 15 percent of all applicants, followed by Europe (8 percent), Canada (5 percent), the Middle East (3 percent), Africa (2 percent), and Oceania (less than 1 percent).

A majority of the applications involved cases where the immigrant had lined up a job in one of four industries: information technology, advanced manufacturing, education, and finance.

Under a 1990 federal law, Castilla notes, “No evaluation criteria should pertain to the country of origin” of immigrants. However, that demographic information is available on each application, although government officials are at least instructed not to use country-of-origin data while reviewing cases.

In the paper, Castilla and Rissing acknowledge they cannot rule out “unobserved heterogeneity in immigrants’ qualifications or application characteristics,” which might help explain the uneven distribution of application acceptances. The authors also emphasize that they would welcome further empirical studies of the subject.

The researchers believe a couple of potential remedies could lead to an application system that yields greater geographic parity.

“One potential solution to the kind of outcomes that we observe … would be if all of these applications were to be audited and thus evaluated with detailed employment information,” Rissing says. However, both he and Castilla acknowledge that this would likely add additional costs and administrative burdens for the federal government.

Alternately, the researchers note, simply masking the country-of-origin data during the review of each application might create a relatively inexpensive fix, addressing the current situation.

Suzanne Gamboa of NBC News writes that MIT researchers have found that Latin Americans are less likely to be approved for work authorizations in the U.S. than immigrants from other areas. Researchers found that authorization disparities “disappeared in cases when officials looked more closely at supporting documents.”

Fusion reporter Ted Hesson writes about a new study, co-authored by MIT Professor Emilio Castilla, examining labor certifications for U.S. immigrants. The researchers found that “Asian and Canadian immigrants have a much better chance of being approved for a work visa than immigrants from Latin America.”

Bruno Perreau examines the politics of adoption in France