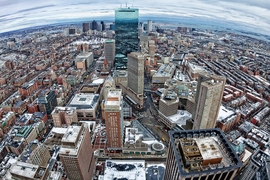 Experts have long theorized that having a cluster of firms within a given industry helps a region’s economy grow. Now a study co-authored by an MIT professor shows empirically that clusters of almost all kinds help drive overall economic growth in multiple ways, from job creation and development of intellectual property to the formation of new industries.

The study, based on a unique long-term project collecting data on regional economies, has important implications for policymakers: It suggests that a region can improve its economic performance by improving its existing assets, rather than attempting a transformation by chasing industries situated elsewhere.

After all, most U.S. cities will probably not lure many high-tech businesses away from Silicon Valley, financial firms away from New York, or entertainment companies away from southern California. However, as the study implies, these would-be suitors don’t have to pursue complete makeovers.

“Very often, regions are given advice that they should become the next Silicon Valley, or be like some other region,” says Scott Stern, the David Sarnoff Professor of Management at the MIT Sloan School of Management, and co-author of a new paper detailing the study. “They’re told that they’re in a global war for talent, or they should try to put out very expensive incentives to attract a single plant. What our research suggests is that regions succeed by investing in and extending their comparative advantage.”

Stern is a co-author of the paper with corresponding author Mercedes Delgado, a professor at Temple University’s Fox School of Business, and Michael Porter, a professor at Harvard Business School.

The study examined 41 industrial clusters, 589 different subfields of industry, and 177 regions in the U.S. Each cluster is composed of multiple related industries that, as the paper states, offer “complementary activities that give rise to increasing returns.” Quantifying the cluster effect in detail, Stern hopes, will help local leaders make sound economic decisions.

“Policymakers can use analytics to understand what their sources of relative advantage are,” Stern says. “And while they, of course, want to avoid picking winners and we want to let a lot of experimentation flourish, we can prioritize those activities that leverage the things about our regions that are unique, distinctive, and meaningful. That leads to a smarter type of economic development than simply chasing the next big thing.”

The paper, titled “Clusters, convergence, and economic performance,” appears in the December issue of the journal Research Policy. The research uses data from the U.S. Cluster Mapping Project, a partnership between MIT, Harvard University, Temple, and the U.S. Economic Development Administration in the Department of Commerce.

An economic cluster, as defined by the study, has about 15 distinct types of industries within it, and multiple regions can host a given industry. For instance, while the Detroit and Cleveland areas feature well-known automotive clusters, so do a pair of economic regions in Kentucky: Lexington and Louisville.

The study spans the years 1990 to 2005. Among other results, it finds that a one-standard-deviation increase above the mean in industry specialization, within a region, leads to an expected 1.3 percentage point annual increase in employment growth in that area — something Stern calls a “first-order” result of the research.

“To me, jobs are a really important outcome, and we’ve tied that back to economic structure,” Stern says.

However, jobs growth is also part of a virtuous cycle of innovation, as measured by patenting activity, that occurs in successful clusters. A cluster that is one standard deviation above the mean according to some of the study’s criteria will also have a 1.2 percentage point annual increase in its growth of patents.

“We see more innovation in strong clusters, and strong innovation clusters are also associated with stronger employment,” Stern explains. “So there’s a duality between the innovation and the jobs.”

A cluster of research papers

The Research Policy paper is one of a number of related studies on clusters Stern has co-authored recently. Along with MIT doctoral student Jorge Guzman, he has conducted detailed research on the economic geography of high-growth firms in both California and Massachusetts.

Other scholars in the field say the current research is valuable both for its empirical benchmarks and for its implications on ways to further develop clusters. David Audretsch, a professor at Indiana University who has published extensively on entrepreneurship and growth, says the current studies usefully focus on “the right conditions” for growth, which can include government policies, links to regional universities, or less formal knowledge spillovers in an industry.

“To generate impactful entrepreneurship, it isn’t just about the entrepreneur,” Audretsch says. “There are much broader types of policies that are going to have an impact on entrepreneurship. I think that’s what the successful places have done, actually.”