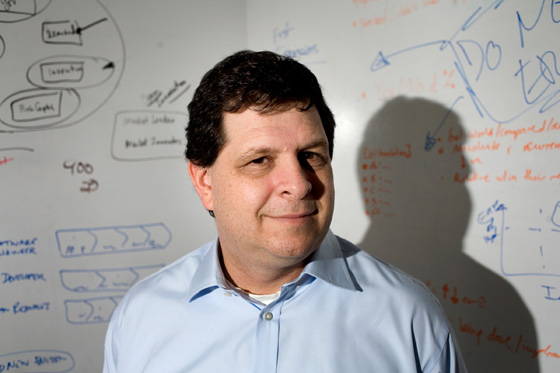 Scott Stern doesn’t work in a laboratory or have a degree in the hard sciences. You’ll never find him using a genome sequencer or an MRI scanner. Yet he knows more about some aspects of science than almost any practicing scientist does.

That’s because Stern, an economist at the MIT Sloan School of Management, has been a leader in expanding the social-scientific study of the scientific enterprise. Stern’s own body of scholarship, dating to the mid-1990s, encompasses issues such as the flow of knowledge in biology, the financial incentives facing scientists and the role of patents in spreading or limiting knowledge. Studying these topics helps Stern and his colleagues paint a detailed picture of science in action, and the role it plays in fostering innovation and economic growth.

“Science and innovation are easy things to theorize about, but you’re likely to be led by some biases or your own agenda rather than an accurate understanding of their complexity and how they work,” he says. Instead, Stern advocates for careful research studies that produce quantifiable results about the inner workings of science.

“The nature of the scientific enterprise produces the data that allows us to understand it,” Stern observes. “Cumulative knowledge in society has a very deep referencing structure inherent to its nature.” Citations of papers and patents, for instance, let economists track the spread of ideas, from labs to production lines.

Because of the migration of this kind of data online and into databases, Stern adds, “there’s been a tremendous explosion in our ability to track how people use knowledge and information over time. Now we’re seeing metrics play an increasing role in the public discussion of science policy.”

Indeed, influenced by the research of Stern and other social scientists, the National Science Foundation started a new program in 2005, its Science of Science and Innovation Policy unit, to develop what Julia Lane, the unit’s program director, calls a “serious empirical basis for studying the funding of science.” Similarly, the National Institutes of Health has created a Science of Science Management unit, which held its first major conference in 2008.

When scientists pay to be scientists, and other phenomena

Stern grew up in the New York area and majored in economics at New York University, then headed to Stanford University for graduate work, also in economics. There he encountered a group of economists interested in the study of innovation. Soon, Stern was conducting an in-depth economic study of the race to produce synthetic insulin, conducted among three groups of scientists in the 1970s. Even with big money at stake in the development of an obviously valuable medicine, Stern found, the decisions of the scientific teams were not strictly motivated by dollar signs.

“There was a sense that everyone was racing to the market, but that turned out not to be true,” Stern says. “They were engaged in a scientific race, and different teams took different approaches.”

From this research, Stern synthesized an insight that remains with him today. “Scientists don’t only care about money,” he says. “They care about discovery, and control. Those are just first-order facts about the scientific enterprise.”

Indeed, in one paper published in 2004 — titled “Do Scientists Pay to be Scientists?” — Stern found that biotech firms can hire first-rate scientists for lower salaries if they give those scientists latitude to spread career-enhancing word of their research.

“Traditional R&D has centralization and heavyweight management, and if you come up with something, you patent it or keep it secret,” Stern says. “You certainly don’t want a scientist to go to the next conference and blab it to everybody.” But scientists will accept wages about 20 to 25 percent lower in biotech jobs that let them publish. “If I prevent you from publishing and letting everybody know you’re a good scientist, I’m going to pay a tremendous wage premium,” Stern says. “With a nice open environment, I’m going to get a discount.”

Another innovative Stern study, conducted with Jeffrey Furman of Boston University, found that citation rates for published findings in biology greatly increase when the physical materials behind the results are made available to other scientists through Biological Resource Centers (BRCs). Stern thinks additional funding for BRCs, which serve as “living libraries” of life-science materials, would pay off in the form of further discoveries.

In another paper, Stern and Fiona Murray, an associate professor at MIT Sloan, found that intellectual property rights slightly depress the flow of scientific knowledge. Studying hundreds of findings that were first published in journals, then subsequently patented, Stern and Murray showed that expected citation rates drop by 10 to 20 percent when property rights are involved.

That doesn’t mean that Stern is arguing against intellectual property rights; he just wants policymakers to be mindful of their effects. “You want to ensure the productivity of the entire system, not just of each project,” he says.

Stern’s work has generated plaudits from his colleagues. “Scott is very enthusiastic and has a ton of creative ideas,” says Josh Lerner, a professor at Harvard Business School who studies innovation and entrepreneurship. “He’s your consummate ideas man, always thinking about new and interesting approaches to research.”

Where the scientists are

An energetic and animated speaker, Stern recently returned to MIT as the School of Management Distinguished Professor and Chair of the Technological Innovation, Entrepreneurship and Strategic Management Group. He taught at the Institute from 1995 through 2001, then moved to Northwestern University for several years before returning to Cambridge.

“There is already a whole cohort of us for whom Scott was an essential part of our graduate educations,” says Pierre Azoulay, an associate professor at Sloan, who as an MIT doctoral student had Stern as one of his advisers.

As Azoulay recalls, Stern was a scholarly night owl, often heading back to the office at the end of the normal workday to continue research late into the night.

Stern certainly has plenty of work to fill his time at the moment. He is using his research on high-tech competition — another subject on which he has published extensively — to develop an “Entrepreneurial Strategy” course at Sloan that provides a road map for startup companies. “Entrepreneurs face a clear choice in any technical venture,” he says. “Are you going to cooperate with the big boys, or go in your own direction? It is very important for venture formation, growth, even who you hire.”

Meanwhile, Stern’s own research continues, abetted by his proximity to so many scientists, engineers, technologists and entrepreneurs.