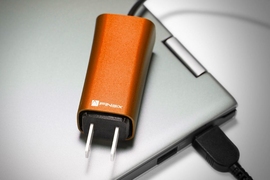 While laptops continue to shrink in size and weight, the “power bricks” that charge them remain heavy and bulky. But now, MIT spinout FINsix has invented an adapter that’s roughly one-quarter the size and one-sixth the weight of a conventional brick, and just as efficient.

The Dart runs on novel very-high frequency (VHF) power-conversion technology, co-invented by Sagneri, that delivers energy more often and in smaller chunks than traditional adapters, ultimately wasting less energy. It does so by making the adapter’s switching frequency — which transfers energy from the adapter to the battery — run 1,000 times faster.

“If you can increase that switching frequency, you can reduce the amount of energy that you have to store temporarily in the inductors and capacitors — which make up the bulk size and weight of power bricks — during the conversion process, and that yields reduced size,” Sagneri explains.

The 65-watt Dart can power most laptops, smartphones, and tablets. By November, FINsix aims to deliver its first shipment of around 4,500 Darts to Kickstarter backers and other customers.

Although Dart is FINsix’s first consumer product, Green says the company aims to bring VHF technology to wide range of applications. This could shrink the AC-DC power converters for products such as LED lights, flat-screen TVs, gaming consoles, laptops, electric bikes, and air conditioners, while reducing the cost of manufacturing.

The technology could also help reduce energy consumption with more ubiquitous power conversion, Sagneri says. “We’re not really an adapter company; we’re creating the commercially enabled technology to allow VHF power converters to become a significant portion of the market,” Sagneri says. “The idea is to help people reimagine the power delivery in their systems. In places where that’s a bottleneck — which it continues to be, as devices get more dense and capable — it helps the rest of technology progress.”

Under the tutelage of David Perreault, an MIT professor of electrical engineering, Sagneri helped develop a novel circuit that executes power conversion at very high frequency — 30 to 300 megahertz — while maintaining efficiency.

When FINsix first licensed this technology, the company set its sights on shrinking power converters for LED lights. About a year later, when the AC-DC technology was ready, the company started focusing on laptop adapters.

In traditional adapters, an array of switches flip to one state and take in AC voltage from a wall outlet, where it’s then stored in inductors and capacitors and converted to DC voltage. The switches then flip to another state to deliver small chunks of the DC voltage to the battery, before returning to their original state.

“If you want to deliver, say, a gallon of water per minute from the full tank to the empty tank, with conventional adapters you’re dipping a one-gallon bucket into the full tank once a minute,” Sagneri says. “We’re delivering that same amount of water, in that same time frame, but 1,000 times faster. So our bucket shrinks from one gallon to one-thousandth of a gallon.”

But each switch cycle burns energy as heat. Switching 1,000 times faster in a typical converter, therefore, means 1,000 times more energy wasted. So the circuit uses resonance techniques (modifying how energy oscillates between inductors and capacitors) to minimize energy loss, meaning the switches turn on and off more efficiently at higher frequencies.

Today, FINsix — which has raised more than $7 million in funding and hired 20 employees — operates out of Menlo Park, Calif., and is rigorously testing its commercial product and rounding up manufacturers.

But its story began at MIT in 2010. Green, as a student in the MIT Sloan School of Management, was looking for technology to commercialize. At the same time, Sagneri, Hwang, and Burkhart were electrical engineering and computer science students who were excited to start a company.

Around 2010, their interests merged in MIT Sloan’s 15.390 (New Enterprises), a course where students pitch business ideas and the class chooses ideas to pursue. Sagneri’s VHF power-conversion technology wasn’t chosen. But Green saw potential. “I was interested in working on something that had real technology behind it,” she says.

The four-person founding team began building FINsix (then OnChip Power) with mentorship from seasoned entrepreneurs in the Martin Trust Center for MIT Entrepreneurship and MIT’s Venture Mentoring Service. “MIT’s ecosystem was a boon to us,” Sagneri says.

To grow FINsix, Green — who won MIT’s Patrick J. McGovern ’59 Entrepreneurship Award in 2011 — harkened back to her days in 15.366 (Energy Ventures), where students from across departments plan businesses around clean technologies.

Throughout the class, she says, teams learn the crucial steps of gathering customer feedback, meeting technological milestones, working through funding stages, and continuously returning to the customer.

“Going through the process there showed me the steps you need to take if you want to commercialize technology,” Green says. “We repeated a lot of those steps as we put together the foundation for OnChip, now FINsix. For me, a lot of the entrepreneurship process was learned though my MIT education.”

Moving forward, FINsix is looking at getting its first product, Dart, into the market and developing higher- and lower-power products to suit customer needs.