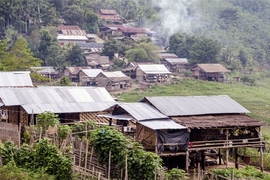 ↓ Download Image
Caption: Thailand’s “30 Baht” program, which increased access to hospitals, has led to a 13 percent drop in infant mortality in about a year. That change seems largely attributable to fewer infant deaths in rural areas, where previously the poor might never have entered hospitals to seek care.
Credits: Photo: Thinkstock

Caption:
Thailand’s “30 Baht” program, which increased access to hospitals, has led to a 13 percent drop in infant mortality in about a year. That change seems largely attributable to fewer infant deaths in rural areas, where previously the poor might never have entered hospitals to seek care.
Credits:
Photo: Thinkstock

Few problems in developing countries are as gut-wrenching as high infant mortality — and yet it is a problem that has solutions. A policy change in Thailand’s health care system has quickly led to significantly lower infant mortality rates among less-wealthy citizens, as a study co-authored by MIT economists shows.

“It’s a very dramatic shift,” says Robert Townsend, the Elizabeth and James Killian Professor of Economics at MIT, and a co-author of a new paper outlining the findings. The study was conducted along with Jon Gruber, an MIT professor of economics and health care expert, and Nathaniel Hendren, an economist at Harvard University.

The researchers found that Thailand’s “30 Baht” program, which increased access to hospitals, led to a 13 percent drop in infant mortality in about a year. That change seems largely attributable to fewer infant deaths in rural areas, where previously the poor might never have entered hospitals to seek care.

The big impact of small copays

Instituted in 2001, Thailand’s 30 Baht program altered health care arrangements in several ways. It provided for funds of about $35 per capita to be granted to provincial hospitals, based on the numbers of local residents, and lowered copays to 30 Thai baht, or about 75 cents, per visit. Previously, about 30 percent of Thailand’s population had been enrolled in a modestly funded health care program, the Medical Welfare Scheme (MWS), while another 50 percent of the population was too well-off for MWS, but not well-off enough to have other insurance.

The study was based on data from a health and welfare survey in Thailand covering years from 2001 to 2005, and consisted of a cross-section of the population in all 76 Thai provinces.

The people most affected by the policy change included those previously enrolled in MWS, which was replaced by the 30 Baht program; moreover, the study found, hospital utilization increased most for women ages 20 to 30 and for infants. In conjunction with this, the decrease in infant mortality was a striking medical outcome stemming from the greater access to hospitals.

“One of the most surprising things about the results is how quickly you see the shift in infant mortality,” Hendren says. “You see it within a year. It’s well known that a lot of the causes of infant mortality are caused by very preventable things, such as dehydration.” Infants with diarrhea, for instance, can become dehydrated; other treatable causes of infant death in the developing world, as studies show, include pneumonia and infection.

The 30 Baht program lowered infant deaths by about 2 per 1,000 births in Thailand over the course of the study; previously, the national rate may have been around 15 per 1,000 births, according to the World Bank’s World Development Indicators.

To be sure, the 30 Baht program was not strictly designed to combat infant mortality alone; its goal has been to increase health care access for all. For that reason, the researchers note, the visibility of the program seems to have helped save lives, in part, by letting more people recognize they have a right to hospital access.

“It’s hard to find somebody who doesn’t know about the 30 Baht program, in the more rural areas,” Hendren says. For hospitals, he adds, “You get the sense there was this greater ability to expand their reach into the community.”

Other scholars say the study’s results are interesting and suggest additional issues for scholarly investigation.

“I think it’s a good-news paper,” says Glenn Melnick, a professor at the University of Southern California who focuses on health economics and finance, and who has previously studied the 30 Baht program. The visibility of the program, Melnick agrees, has likely helped direct people in rural areas to hospitals: “A lot of the time, people don't know what to do” about locating health care providers, he observes. Still, Melnick suggests, there are lingering questions about whether the Thai program can support more expensive forms of care over the long term.

As Townsend notes, plenty of research questions remain about how the operations of hospitals have changed since the implementation of the 30 Baht program.

“If we could, we would try to know more about the delivery mechanism of health care within the hospitals, how they allocate care and treatment depending on the patients,” Townsend says.