How construction of MIT’s newest building will affect the campus 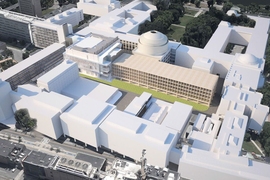 When completed, the new MIT.nano building will be used by a significant fraction of the Institute’s faculty, students, and postdocs for nanoscale research and imaging.

But over the next 4 1/2 years, MIT.nano’s central location — replacing the current Building 12 — will mean that construction will create disruptions, noise, and inconvenience for some members of the MIT community.

To help people prepare, and to address questions and concerns, project leaders have conducted meetings with 35 labs, centers, and departments — mainly abutters — to explain how the project will affect them. Those meetings culminated last week with two all-campus community meetings.

Vladimir Bulović, the project’s faculty lead — and the Fariborz Maseeh Professor in Emerging Technology and associate dean for innovation in the School of Engineering — explained that while nanotechnology plays a part in about 20 percent of the research on MIT’s campus, the facilities used today for this research are scattered and overcrowded. But construction of the building that will alleviate that overcrowding will itself pose many challenges, in the short term.

Just digging the hole for the new building’s foundation will involve removing 1.4 million cubic feet of dirt, explained Travis Wanat, MIT.nano’s senior project manager. The building itself will use 12,000 cubic yards of concrete, 3.4 million pounds of steel, and 53,000 square feet of glass. On its way to the Building 12 site, all of that material will have to pass through just three access points.

The project team has made many efforts to reduce disruptions as much as possible, Wanat said. For example, while traditional construction of such a building would use sheet pilings around the foundation, this project will instead use slurry walls, poured in place. This is expected to produce far less noise and vibration than the driving of sheet pilings, Wanat said. Construction vehicles will use exhaust scrubbing to minimize the impact of fumes on adjacent buildings.

The building itself will be constructed with far more steel and less concrete than is typical for such a structure, greatly reducing the number of trucks needed to deliver materials to the construction site. And in the demolition of the existing Building 12 — not expected to begin until 2015 — equipment will dismantle and crush sections of the building as they are removed “to minimize the crashing of large pieces,” Wanat said.

The new building, described by architect Samir Srouji of Wilson Architects as “a stone box wrapped around with a veil of glass,” will connect to Building 13, Building 16, and have easy ground-level access from the Infinite Corridor and Building 24.

When asked about the $350 million cost of the building, Bulović said that the cost is comparable, per square foot, to that of similar recent buildings at Harvard University and the University of Massachusetts at Lowell. He added that the cleanroom space within MIT.nano is larger than that found at those facilities, and that the new building will include the highest-quality vibration-free space for imaging equipment on the entire MIT campus.

Community meeting attendees also asked about the visual impact of the building and landscaping, and how that will affect neighboring facilities. Details of the layout and landscaping of spaces between MIT.nano and other buildings are still being worked out, Bulović said, but MIT sees a significant opportunity to animate these as community spaces, he added.

Some attendees asked about the impact of the construction on parking availability. Larry Brutti, MIT’s manager of parking and transportation, explained that while those who currently park in the Main Lot will be reassigned to other facilities, chiefly in the Stata Garage, there will be no net loss of spaces: The 99 spaces that will be unavailable during construction will be replaced with 120 leased spaces nearby, mostly in the Tech Square area.

Members of the MIT community can sign up to receive weekly email updates on the construction activities and any road or sidewalk closures, Arne Abramson, MIT’s director of capital projects, explained. Anyone who wants to receive these updates can sign up by sending an email message to mitnano-info@mit.edu, he said. “We want to make sure nobody is surprised,” Abramson said.

In addition, Abramson said, once construction is under way, there will be periodic lunchtime “tool talk” discussion sessions held in a conference room in Building 4, which directly overlooks the site.

Welcome to the nano age