A bumper crop you shouldn’t bump 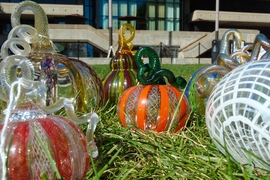 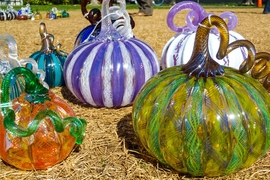 From pies to lattes, this time of year is dominated by pumpkins. But few are as beautiful as the blown-glass pumpkins of all shapes, colors, and sizes that covered Kresge Lawn one recent Saturday.

The sea of glittering gourds was no autumnal illusion; in fact, it was MIT’s annual Great Glass Pumpkin Patch. The annual fundraiser sells some 2,000 glass pumpkins at prices from $20 to more than $600, generating funds sufficient to cover the yearly expenses of the MIT Glass Lab, the glassblowing studio in the basement of Building 4.

Founded in 1986 by Michael Cima, now the David H. Koch Professor of Engineering in MIT’s Department of Materials Science and Engineering, the Glass Lab enjoyed a prosperous first decade through a combination of good luck, ambitious students and artists, and generous departmental funding. But by 2000, Cima realized that for the Glass Lab to remain sustainable over the long-term, it would need to raise its own funds. But how?

Inspiration came from a Glass Lab alumnus, Mike Binnard ’92, SM ’95. While pursuing a doctorate at Stanford University in the late 1990s, Binnard and some friends at nearby San Jose State University founded the Bay Area Glass Institute (BAGI), a nonprofit community studio that conducted a Great Glass Pumpkin Patch fundraiser of its own.

“Mike came by and said, ‘Hey, this is something you can do and raise money for the Lab,’” Cima recalls. “And we just thought it was a fantastic idea.”

In 2001, 14 visiting artists from BAGI instructed Glass Lab students on how to craft the pumpkins, and after several weeks of rapid-fire manufacturing, MIT’s first Great Glass Pumpkin Patch sprang up outside Kresge Auditorium. The Glass Lab has done gourd deeds ever since, hosting volunteer crews on nights and weekends to prepare for each year’s fundraiser.

Why pumpkins, though? For one, says Peter Houk, a technical instructor in the Glass Lab, pumpkins “are a neutral shape, and you can kind of go anywhere with it.” Through the years, students and instructors have pushed the form to its limits, making everything from “rotten pumpkins” — flattened ones dotted with simulated mold — to champagne flutes with pumpkins as stems.

“I think people enjoy breaking the rules,” says Kaitlyn Becker ’09, a Glass Lab instructor, given that “fantastical decoration is in the spirit of the Patch.” The sheer freedom that the pumpkin’s shape affords also gives students room to improvise, one of the key reasons why Cima founded the Glass Lab nearly 30 years ago. After all, Cima says, “It’s not a straight path to the pumpkin. You can’t script it.”

Each pumpkin sold at the Great Glass Pumpkin Patch meanders into being through the hard work of three-person crews that carefully blow, shape, and twist molten glass for hours at a time. It’s an intricate process whose potential dangers demand effective teamwork: At any given time in the Glass Lab during pumpkin session, “There are [two crews] with hot glass at the ends of their pipes walking around,” Becker says.

Amazingly, much of the crews’ work happens in silence, says Chris Moore ’90, PhD ’96, a longtime Glass Lab supporter: “There’s relatively little talking because … you kind of know where people are going to move. It’s a ballet that sort of choreographs itself.”

It’s a dance that has yielded unimaginably successful results: a financially secure Glass Lab that brings joy to students, instructors, and community members alike. The one question nagging Houk, however, is how pumpkins have stayed so popular for so long: “There’s a little mystery there,” he says. “I have never quite figured out how we can almost sell out 14 years in a row.”

But to those in the broader Boston community, like Sudbury, Mass., resident and glass pumpkin collector Rory Richards, there’s little mystery behind the Great Glass Pumpkin Patch’s magic.

“It was a perfect, crisp fall morning,” she says of her first visit to the event, in 2003, “and all around you are these amazingly gorgeous, super-fragile glass pumpkins, arrayed on the ground as if you were really walking into a real pumpkin patch.”

“There was something almost mystical about the way that it looked,” Richards says. “It was profoundly fun.”

A window to the art of classical manufacturing science