The pulsar, about as large as the city of Boston, is 10 million times brighter than the sun.
Jennifer Chu | MIT News Office
Publication Date:
Press Inquiries 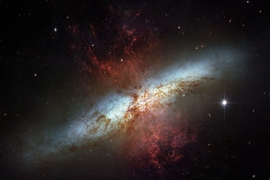 ↓ Download Image
Caption: This mosaic image of the magnificent starburst galaxy, Messier 82 (M82), is the sharpest wide-angle view ever obtained of M82. It is a galaxy remarkable for its webs of shredded clouds and flame-like plumes of glowing hydrogen blasting out from its central regions, where young stars are being born 10 times faster than they are inside in our Milky Way Galaxy.
Credits: Image courtesy of NASA, European Space Agency, and the Hubble Heritage Team (STScI/AURA)

Caption:
This mosaic image of the magnificent starburst galaxy, Messier 82 (M82), is the sharpest wide-angle view ever obtained of M82. It is a galaxy remarkable for its webs of shredded clouds and flame-like plumes of glowing hydrogen blasting out from its central regions, where young stars are being born 10 times faster than they are inside in our Milky Way Galaxy.

Astronomers have detected a pulsating dead star that appears to be burning with the energy of 10 million suns, making it the brightest pulsar ever detected. The pulsar — a rotating, magnetized neutron star — was found in the galaxy Messier 82 (M82), a relatively close galactic neighbor that’s 12 million light-years from Earth.

The exceptional brightness of the pulsar classifies it as an ultraluminous X-ray (ULX) source — an object so bright that it defies any known process of stellar radiation.

Indeed, ULXs are scientific curiosities, and astronomers have proposed that such objects may be intermediate-mass black holes: not as small as stellar black holes, which have a mass five to 50 times that of our sun, but not as big as supermassive black holes, which are 100,000 to 1 billion times as massive as the sun. The extreme brightness of a ULX source could conceivably be generated by such a midrange black hole, though one has yet to be detected.

In light of such long-held hypotheses, the identification of this newest ULX source as a pulsar is puzzling. By their nature, pulsars are not very massive; at most, these stellar objects — not much wider than the city of Boston — can measure three times the mass of the sun. Such relatively slight objects would, in turn, emit weak X-ray signals. The fact that this newly identified pulsar appears far brighter than its mass would indicate is a confounding mystery.

“There are a number of ULX sources known, and until now, most people have assumed that they are black holes, and pretty massive,” says Deepto Chakrabarty, a professor of physics and head of the astrophysics division at MIT. “Now there may be other, similar ULX pulsars. And that would mean the whole picture that was being built up to try and explain this whole class of weird objects is wrong.”

Chakrabarty and his colleagues, led by Matteo Bachetti at the University of Toulouse and Fiona Harrison at the California Institute of Technology, publish their results today in the journal Nature.

The team identified the pulsar through NASA’s Nuclear Spectroscopic Telescope Array, or NuSTAR — a pair of orbiting telescopes that detect high-energy X-rays from far-off galaxies. NuSTAR is led by the California Institute of Technology, and managed by NASA’s Jet Propulsion Laboratory.

The detection was a bit of a surprise, as the astronomers originally intended to observe a recent supernova in the M82 galaxy. Coincidentally, the team noticed a source of extremely bright X-rays coming from a nearby location, which turned out to be M82 X-2 — one of two known ULX sources in the galaxy. To their surprise, the researchers found that the source had a pulse.

To get a clearer picture of the pulse, the researchers looked at the ULX source using NASA’s Chandra X-ray Observatory and Swift satellite. Together with NuSTAR, the telescopes narrowed in on a pulse rate of 1.37 seconds, and a luminosity 10 million times that of the sun.

As black holes cannot emit a pulse, the researchers concluded that the object must be a pulsar. However, it appears far brighter than any ordinary pulsar should be. That’s because a neutron star’s or black hole’s luminosity is determined in part by its mass: The more massive an object, the more gravitational pull it exerts, creating a process called accretion in which an object, like a black hole, sucks up surrounding matter.

In turn, X-rays radiate back out, proportional to the amount of incoming matter and the mass of the star. This radiation can push back against the incoming matter, and can even stop the matter if the radiation is bright enough — a limit that astronomers refer to as the Eddington limit. A pulsar, then, should emit a modest amount of radiation, given its slight mass.

However, based on the brightness data from NuSTAR, this pulsar seems to exceed the Eddington limit, emitting about 100 times more radiation than it should.

An oddball among oddballs

Chakrabarty, an expert in pulsars, took a look at the data from another angle to determine the torque exerted on the pulsar by the incoming matter — a feature that independently implies the amount of this matter. As he explains it, a pulsar’s rate of spin change depends on its magnetic field and the amount of mass that it’s accreting. As matter falls in, it is captured by the pulsar’s magnetic field, exerting a torque that changes the pulsar’s spin. These magnetic accretion torques only occur with pulsars, not black holes.

Chakrabarty used the pulsar’s measured spin change rate to calculate how much mass must be falling in as a result. Based on these calculations, he found that the pulsar still exceeds the Eddington limit — though by only a factor of two or three, not 100.

“One of the big puzzles here is how to reconcile this,” Chakrabarty says. “And we don’t yet have an answer to that.”

One possibility may be that the pulsar’s X-ray emissions are beamed from a single point, rather than radiating uniformly throughout the surface — a phenomenon that would produce an extremely bright X-ray signal, despite the pulsar’s low mass. Chakrabarty says beaming is a tantalizing possibility to explain the pulsar’s exceeding brightness. How exactly that beaming would occur is a puzzle that theorists will have to address.

“ULXs are already oddballs,” Chakrabarty says. “It might be that this [pulsar] is an oddball among the oddballs — it’s a pulsar, but it’s this weird outlier, and everything else is a black hole. Or it might be that some substantial fraction of ULX sources is pulsars. But there are already various indications that these ULX sources do seem to be quite unusual compared to most things we know in our galaxy.”

Jonathan Grindlay, a professor of astronomy at Harvard University, says limited telescope power may explain why more ULX sources have not been identified as pulsars to date.

“[Pulsars] are easily missed, given the limited time resolution of the currently operating sensitive X-ray telescopes,” says Grindlay, who did not contribute to the study. “This paper will surely suggest future Chandra observations in its ‘high time resolution’ mode of other ULXs. Proposal review panels would previously have viewed pulsar searches from ULXs with skepticism. This will now likely change.”

This work was funded by NASA.

Researchers from MIT have detected the brightest pulsar ever recorded, reports Brook Hays of UPI. “Despite its small dimensions and modest mass, the pulsating dead star is burning with the energy of 10 million suns,” writes Hays.

A burst of activity in the middle of the Milky Way