Caught in the social safety net 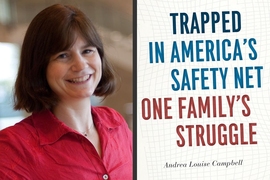 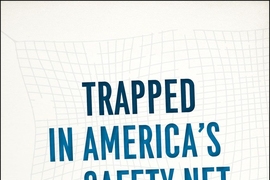 ↓ Download Image
Caption: Andrea Louise Campbell has written a book on her family’s experience, “Trapped in America’s Safety Net: One Family’s Struggle,” published this month by the University of Chicago Press.

Caption:
Andrea Louise Campbell has written a book on her family’s experience, “Trapped in America’s Safety Net: One Family’s Struggle,” published this month by the University of Chicago Press.
Credits:
Photo: Stuart Darsch

When a nursing student named Marcella Wagner swerved to avoid another car on a freeway in northern California, in February 2012, her entire life changed. Wagner, who was seven months pregnant, skidded off the road, crashed, and was paralyzed from the chest down.

Amazingly, doctors were able to deliver Wagner’s baby in healthy condition, but she would need extensive daily assistance. Wagner and her husband, Dave Campbell, who worked for a small manufacturer and earned $39,000 a year, have only been able to afford that assistance through Medi-Cal, the state version of Medicaid.

Medi-Cal is a means-tested program, meaning it has restrictions on personal wealth: Essentially, recipients are subject to income limits, and may only have $3,150 in assets beyond a house and one vehicle. So Campbell and Wagner have to be comparatively poor to get health care: low income, no retirement savings, no college savings for their child.

“It’s a huge hole, and it’s one that people don’t know about,” says Andrea Campbell, a professor of political science at MIT and an expert in social policy.

Campbell now knows about this hole from personal experience: She is the sister of Dave Campbell, and has spent much of the last two years trying to help her family obtain the best care possible. She has also been trying to bring attention to the plight of Americans who, while appreciative of social programs intended to support people in need, suffer from some of their strictures — especially those who are in need of “long-term support and services,” as the disability community calls it.

Two months after Wagner’s accident, Campbell wrote an op-ed in The New York Times critiquing the inconsistencies of the country’s social-policy programs and calling for the implementation of the federal government’s Affordable Care Act (ACA), which was then under judicial review. Two months after that op-ed appeared, the U.S. Supreme Court upheld the constitutionality of the ACA — and Justice Ruth Bader Ginsburg cited Campbell’s piece in her concurring opinion.

“I had no expectation of that at all,” Campbell says. “That was incredible.”

Now Campbell has written a book on her family’s experience, “Trapped in America’s Safety Net: One Family’s Struggle,” published this month by the University of Chicago Press. In it, she details how her family now contends with daily life while facing financial restrictions healthy people do not have.

“There is a safety net, and I hope we do not come off as ungrateful in this book,” Campbell says. Still, she adds,  “In many ways these programs just thwart people’s efforts to better their lot.”

Does means-testing justify its ends?

To see how means-testing imposes practical restrictions on people, consider Medi-Cal’s requirement that Dave Campbell and Marcella Wagner can exempt only one vehicle from their asset limit. Wagner needs a wheelchair-accessible van at her home, but since her husband has to drive to work, the couple needs a second car. However, because this vehicle counts toward the $3,150 limit on assets, Dave Campbell now commutes in a 1968 Datsun pickup worth a couple of hundred dollars — which Andrea Campbell, wary of auto safety following her sister-in-law’s accident, calls “not dependable.”

Or take college savings: Medi-Cal does not let recipients invest in the popular “529” college plans that let families set aside money for higher education. And unexpected expenses — such as repairs to a car or home — become harder to manage if people are not allowed to save.

“Every little thing is a crisis, because you have so little in assets,” Campbell says.

To be sure, means-testing is not uniform across the 50 states. The welfare program Temporary Assistance for Needy Families has a maximum benefit ranging from a high of less than half the poverty level, in New York state, to a low of $2,040 a year for a family of three in Mississippi — roughly 11 percent of the federal poverty level, or a bit more than the annual household income in Nigeria.

Yet the single biggest flaw with means-testing, in Campbell’s view, is that the income limits and other restrictions can make it harder for people to break free of social insurance programs.

“Work has a high cost, because as you start earning income, you lose eligibility for programs,” Campbell says, noting that for everyone without a remarkable long-term care insurance policy, long-term services and support are “extraordinarily expensive, beyond [their] means.”

To change that dynamic, Campbell thinks we should either raise the asset threshold or drop means-testing. The ACA does not use an asset test, which is one reason she advocated for it in The New York Times. On the other hand, the ACA does not apply retroactively to Campbell’s family.

The fact that the ACA does not apply to Wagner’s situation points to another problem with many social insurance programs, Campbell says: They consist of incremental layers added by legislatures — usually with good intentions, but with the consequence of confusing even case workers, since different layers apply to different people.

“The complexity comes from having all these different programs added,” Campbell says. Her family is still trying to determine exactly what income level Dave Campbell could legally reach without costing his wife her health care.

Meanwhile, the necessity of complying with a mountain of requirements weighs on those requiring assistance. For her brother and sister-in-law, Campbell says, “I think their main emotion is almost fear [of] losing eligibility for this crucial program.”

Still, Campbell jokes wryly, there is at least one upside. “As my sister-in-law said, ‘In the media you hear all these stories about fraud. But I don’t know how anyone does fraud, because it takes all your energy just to figure out how to do things right.’”

Other scholars have praised “Trapped in America’s Safety Net.” Deborah Stone, a professor of government at Dartmouth College, calls it “a remarkable, astonishing book, at once a comprehensive reference on the American social welfare system and an engaging narrative account of how social assistance programs shape real people’s lives.”

As far as public discussion of the subject goes, Campbell readily acknowledges that long-term disabilities are fairly rare and that readers may not know anyone in her family’s situation. But using a means-tested social-policy program is not rare: Two-thirds of Americans live in a household where someone will enroll in a means-tested program between ages 18 and 64.

“These are programs that touch most American families, so all of us have a stake in their being better-designed,” Campbell says.

And many of us are just a swerve on the freeway away from the same situation, she concludes: “I hope part of this conversation is about the precariousness of the middle class, because it is striking how many people have low incomes, very little in savings, and live month to month.”