3 Questions: Jayakanth Srinivasan on mental health in the military 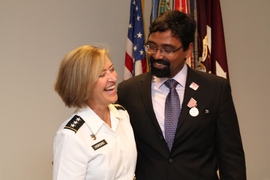 Earlier this summer, the U.S. Army presented its “Outstanding Civilian Service” award to Jayakanth Srinivasan, a research scientist in the Organizational Studies Group at the MIT Sloan School of Management. The award was for a multiyear project in which Srinivasan and a team of graduate students studied the Army’s mental health care practices, with an eye toward standardizing the system; the award itself says that Srinivasan has “substantially improved the Army’s behavioral health system of care.” Srinivasan’s research was part of a larger MIT project on military medical care whose principal investigator is Thomas Kochan, the George Maverick Bunker Professor at MIT Sloan. MIT News recently sat down with Srinivasan to discuss his work.

Q. You’ve just been given the U.S. Army’s “Outstanding Civilian Service” award for your work to assess and restructure the Army’s model for giving care to soldiers with mental health problems. How did you go about studying the Army’s medical operations?

A. We spent about the first six months in 2010 talking to a lot of people with a lot of stars. The recommendations as a whole were remarkably consistent, but none of them had translated into practice. And that was really the big challenge for Admiral [Michael] Mullen, the chairman of the Joint Chiefs of Staff: You can’t go in just saying, “Policy is broken.” Can we figure out what the system of care looks like, where are the levers of change within that system, and then how do you actually make data-informed decisions? So I’ve gone and seen how the Army does work in 24 site visits and we’ve had nine incredible graduate students working through the system.

Which, by the way, is the largest health care delivery system in the U.S., 9.6 million subscribers at last count. So the military health system is incredibly rich and diverse. It’s really two systems: There is a purchased-care system that is governed by contracts, and a direct-care system. We were not just talking to the clinical care providers, [but] the ancillary service providers, the military itself [soldiers], the hospital administrators, the larger community. It’s incredible how rich the narrative was that [came] out of that: What we had was a loosely coordinated set of practices for mental health delivery. What we have now is a system of care for active-duty soldiers. We haven’t cracked the code for family members yet, because we have a capacity problem.

What we’ve been able to do is establish a collaboration to think about the problem. The collaborative partnership between the Army and MIT is incredible. It is a unique partnership.

Q. What else did you have to evaluate before making any recommendations?

A. In civilian life, a provider-patient relationship is a dyad. In the military, a provider is asked to do different things. I have to treat you, but I also have to talk to command in certain circumstances, so there’s an occupational aspect to it. … It gets messy really fast, so the system has to be right. All we are talking about is: How do you organize the system to help people that are experts apply their expertise appropriately? And when you do that, magic happens.

We as MIT cannot change the system. We can provide data-driven insights and action. [For instance,] our rate of [post-traumatic stress disorder] is going down, but people with PTSD and major depressive disorder still account for a significant percentage of costs. Now … the issue is not cost. What we wanted to see is who is using the resources, and can we improve their care management. It was really about getting to that patient experience of care. You want to have that right, and have the command experience of care match that. These were all ideas that the Army already had. They had pilots in different places. But the Army is so large, and they’re busy.

Q. So ultimately, then, we’re talking about reorganizing a system of care, and helping the Army assess how its medical care is functioning?

A. The Army is really a recovery-oriented organization. They fundamentally believe you can recover from health conditions. They give you time to recover. No other company gives you as much. … We’re not telling them how to do clinical care or making recommendations on treatment. … We’re talking about whether an enterprise has the ability to make an assessment. Our role is to establish that organizational layer to say: “Does the system work as intended?”

We’re trying to get three effects: transparency in patient flow, the ability to measure patient outcomes, and continuity of care across transitions. … We never said we have the optimal solution. All we have is a solution you can look at and improve yourself. What we have from a standardization standpoint, when we started this project, there were over 200 programs that were supposed to be related to mental health, as part of the mental health system of care in some way, shape, or form. The Army now has 11. So the patient experience of care from installation to installation gets standardized. The names will be the same, the ways patients transition across [them] will be the same. We can measure it.

Keeping it simple (for a bioinformatician)