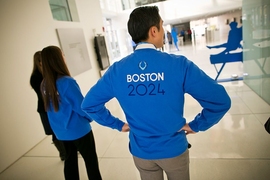 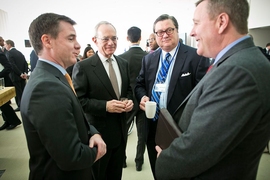 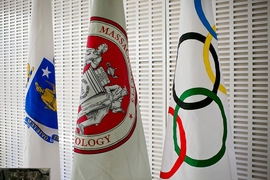 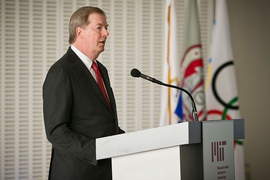 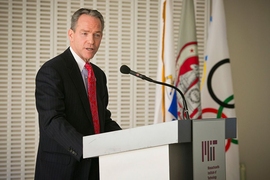 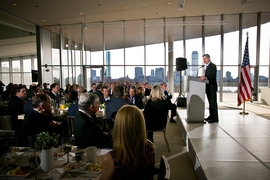 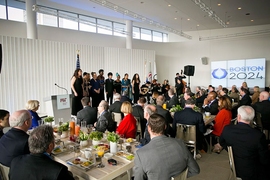 Today, the United States Olympic Committee (USOC) visited Boston. Israel Ruiz, MIT’s executive vice president and treasurer, serves as one of four co-chairs — along with Katie Lapp, Harvard University’s executive vice president; Gloria Larson, president of Bentley University; and Robert Caret, president of the University of Massachusetts at Boston — of the Boston 2024 Institutional Outreach Subcommittee, a group that is working to engage universities across Massachusetts in support of Boston’s bid. He spoke with MIT News about the Institute’s role in the city’s Olympics bid.

Q. Why did the USOC come to Boston today?

A. Boston is one of four American cities — along with Los Angeles, San Francisco, and Washington — vying to become the United States Olympic Committee’s (USOC) nominee to host the summer Olympics and Paralympic Games in 2024. Today, Boston hosted the USOC, with meetings at MIT’s Media Lab in the morning and the Isabella Stewart Gardner Museum in the afternoon — the last such meeting to be held in Boston before the USOC decides among the four cities in January.

This was an opportunity for Boston to showcase itself as a center of innovation with a passion for sport, and for members of the U.S. Olympic Committee to experience the city and see firsthand the possibility for a walkable Olympic games with great international appeal.

Of particular interest to me is that there is a movement to develop financially sustainable approaches to hosting the games, so that cities can afford to continue the great traditions of the Olympics. I believe that MIT — along with other higher education institutions across the Boston region — has much to contribute to this discussion. We have the opportunity to do things differently, and to chart a new approach to hosting the games for future generations.

Q. How does the bid process work, and what are the next steps in the selection process?

A. Each of the four U.S. applicant cities competing to host the summer Olympics in 2024 must submit a proposal describing plans for key venues — sporting events, the stadium, and “Olympic village” — along with plans for transportation and security; public support; and financing for the games. This first phase of the bid process lasts six months, with the cities’ final proposals due in December.

The Boston 2024 Partnership is a nonprofit organization formed to prepare the bid materials. The group is governed by a 36-member executive committee, and has launched a series of subcommittees aimed at master planning, fundraising, outreach, and engagement. As co-chair of the Institutional Outreach Subcommittee, I am a member of the executive committee.

The U.S. Olympic Committee is expected to select an applicant city in mid-January, and the successful city will go on to compete internationally to host the games. This second phase of the bid process is 2 1/2 years in duration; announcement of the final host city is expected in summer 2017. Once selected, the host city then has seven years to prepare for the games, which will take place in the summer of 2024.

A. MIT was invited to participate as part of the overall university engagement for the games. The Institutional Outreach Committee that I serve on is helping to engage people from universities across Massachusetts, and we are imagining possibilities for K-12 outreach around sport, health, and wellness; youth engagement around community service; and programs for Olympic athletes to return to Boston for educational experiences after the games. MIT has had a number of students that have competed as Olympic athletes for a range of countries, with nine alumni receiving Olympic medals.

We also foresee faculty engagement around innovation. Professor Carlo Ratti of MIT’s Department of Urban Studies and Planning and his colleagues from the Senseable City Lab have been talking with the Boston 2024 team about opportunities to use real-time urban data, such as cellphone network information, to better understand urban flows and patterns of activity. Using mobility patterns to reveal unused capacity in the transportation infrastructure could inform planning and help to achieve a walkable Olympics, complemented by appropriate transportation infrastructure.

One thing we talk a great deal about is the potential legacy of the Boston games, and the possibilities for positive impact on the city and surrounding areas. If the Olympics come to Boston, we are likely to see improvements to transportation infrastructure, such as increased capacity on the Red Line, which would be great for Cambridge, the Kendall Square area, and MIT.

One of the strengths of the Boston area is the vast number of universities located in very close proximity — meaning that there are tremendous opportunities for student engagement and volunteerism. Dean for Student Life Chris Colombo is collaborating with student affairs officers from other universities to consider these opportunities. I, myself, was a student volunteer during the 1992 summer Olympics in Barcelona, and it was a thrilling experience that I will never forget. The games had an amazing impact on the city, and the rejuvenation was wonderful to watch.

Director of Athletics Julie Soriero is engaging with us to imagine how MIT might contribute to the games; the Institute offers one of the broadest intercollegiate athletics programs in the world, with 33 varsity sports overall. If Boston is successful and is ultimately selected as the host city, we are pursuing possibilities for MIT to provide the sporting venues for archery and fencing.

MIT has a long history of achievement in archery and in men’s and women’s fencing, with athletes receiving accolades for exceptional academic achievement as well as athleticism: Our head coach for men’s fencing, Jarek Koniusz, was coached by the current U.S. Olympic team coach, Ed Korfanty. And freshman Jin Kim was a member of both the 2014 USA Archery and USA Junior Archery teams.