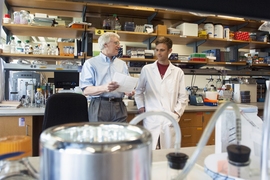 Caption:
Doug Lauffenburger and Aaron Meyer
Credits:
Photo: David Castro-Olmedo/MIT
Cancer drugs known as ErbB inhibitors have shown great success in treating many patients with lung, breast, colon and other types of cancer. However, ErbB drug resistance means that many other patients do not respond, and even among those who do, tumors commonly come back.

A new study from MIT reveals that much of this resistance develops because a protein called AXL helps cancer cells to circumvent the effects of ErbB inhibitors, allowing them to grow unchecked. The findings suggest that combining drugs that target AXL and ErbB receptors could offer a better way to fight tumors, says Doug Lauffenburger, the Ford Professor of Bioengineering, head of MIT’s Department of Biological Engineering and an affiliate member of MIT’s Koch Institute for Integrative Cancer Research. 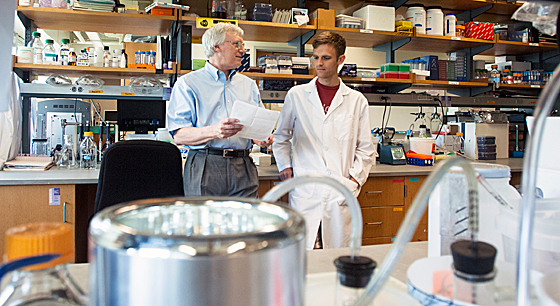 “Drug resistance is the major challenge in cancer these days. People are coming up with a lot of targeted therapies for particular genes and identifying drugs that work against them, but resistance is just invariably the issue,” says Lauffenburger, the senior author of a paper describing the findings in the Aug. 6 issue of Science Signaling.

ErbBs, a family of epithelial growth factor receptors (EGFRs), are proteins that are often overactive in cancer cells, causing them to grow and divide uncontrollably. The drug Iressa is used to treat lung cancer patients whose tumors overexpress one type of ErbB mutant, and Herceptin targets another ErbB family member that is found in certain types of breast cancer.

“There are a lot of excellent drugs that target EGFR itself or other members of that family, yet they have these limitations,” Lauffenburger says.

In the new study, Lauffenburger and colleagues set out to identify factors that help tumor cells become resistant to EGFR and other ErbB inhibitors. To do this, they developed a new computer model and applied it to a large dataset called the Cancer Cell Line Encyclopedia, which includes information on about 1,000 human cancer lines and their responses to different drugs.

Led by biological engineering graduate student Aaron Meyer, lead author of the paper, the researchers created a machine learning program that can sift through the data and look for pairs of overexpressed proteins that make tumor cells resistant to EGFR inhibitors. In this case, they searched for the EGFR protein in combination with every other possible protein in the database, one pair at a time.

Through this analysis, the researchers found that EGFR paired with the AXL receptor appears to be the strongest marker for EGFR inhibitor resistance. They found this pattern across many types of cancer, including lung, breast and pancreatic.

A few previous studies have shown that overexpression of AXL is associated with resistance to EGFR inhibitors in a particular tumor, but this is the first systematic study to demonstrate the correlation, Lauffenburger says. This “systems biology” approach, which focuses on complex interactions within biological systems, is critical for finding new drugs that work together to knock out cancer’s defense mechanisms, he says.

“It’s now well known that when you look for a single pathway, you won’t get to an effective therapeutic. You will end up with resistance,” Lauffenburger says. “You’ve got to look at pathways in combination, you’ve got to look at whole interacting networks. That’s the only way.”

Clues to a mystery

Then, in experiments on cancer cells grown in the lab, the researchers found that the AXL protein tends to cluster with EGFR on cell surfaces, so when EGFR is activated, AXL also becomes active. AXL then not only stimulates further much of the same cellular machinery targeted by EGFR, but also additional pathways provoking cell growth and division. AXL also helps cells become more motile, allowing cancer to spread through the body.

The researchers also showed that other members of the ErbB family beyond EGFR similarly cluster with AXL. This suggests that AXL inhibition may also be effective for treating breast cancers dependent on ErbB2 or ovarian cancers that overexpress ErbB3, Lauffenburger says.

The study sheds light on the complicated interactions between EGFR and other proteins that help tumors re-emerge after initial treatment with EGFR inhibitors, and could help researchers develop improved treatments, says Trever Bivona, an assistant professor of medicine at the University of California at San Francisco.

“The implication that emerges from the findings is that the way receptor kinases interact to undermine sensitivity to treatment is quite complex,” says Bivona, who was not part of the research team.

High levels of AXL have previously been found in triple-negative breast cancer cells, which lack the three most common breast cancer markers — estrogen receptors, progesterone receptors and HER2 receptors. The new finding may explain why EGFR inhibitors fail to work on these tumors even though they have high EGFR levels, Lauffenburger says.

“Triple-negative breast cancer cells were a special interest of ours mainly because it’s always been such a mystery why they have not responded to EGFR inhibitors,” he says.

The new study suggests that AXL inhibitors, either alone or in combination with EGFR inhibitors, might be an effective treatment for triple-negative breast cancer, which is now treated with chemotherapy drugs that have severe side effects. A handful of clinical trials are currently testing AXL inhibitors against different types of cancer, and Lauffenburger is now planning studies in mice to investigate the effects of combining AXL and EGFR pathway inhibitors.