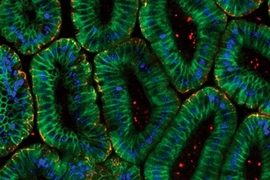 Caption:
Shown here are mouse intestinal epithelial cells. MIT and MGH researchers have modeled how such cells respond to tumor necrosis factor
Credits:
Image: The Journal of Cell Biology
Biological systems, including cells, tissues and organs, can function properly only when their parts are working in harmony. These systems are often dauntingly complex: Inside a single cell, thousands of proteins interact with each other to determine how the cell will develop and respond to its environment.

In the March 22 online edition of the journal Science Signaling, researchers from MIT and Massachusetts General Hospital report that they have created a new computational model that describes how intestinal cells in mice respond to a natural chemical called tumor necrosis factor (TNF).

The work demonstrates that systems biology offers a way to get a handle on the complexity of living systems and raises the possibility that it could be used to model cancer and other complex diseases, says Douglas Lauffenburger, head of MIT's Department of Biological Engineering and a senior author of the paper.

"You're not likely to explain most diseases in terms of one genetic deficit or one molecular impairment," Lauffenburger says. "You need to understand how many molecular components, working in concert, give rise to how cells and tissues are formed — either properly or improperly."

Systems biology, a field that has grown dramatically in the past 10 years, focuses on analyzing how the components of a biological system interact to produce the behavior of that system — for example, the many proteins that interact with each other inside a cell to respond to hormones or other external stimuli.

"The beauty of systems biology is that it doesn't ignore the biological complexity of what's going on," says Kevin Haigis, an assistant professor of pathology at MGH and Harvard Medical School and a senior author of the Science Signaling paper.

"Biologists are trained to be reductionists," adds Haigis, who was a postdoctoral associate at MIT before moving to MGH. "I don't think people have failed to realize the complexity of how biology works, but people are accustomed to trying to reduce complexity to make things more understandable."

In contrast, the systems biology approach tries to capture that complexity through computer modeling of many variables. Inputs to the model might be the amounts of certain proteins found inside cells, and outputs would be the cells' resulting behaviors — for example, growing, committing suicide or secreting hormones.

While at MIT, Haigis worked in the lab of Tyler Jacks, director of the David H. Koch Institute for Integrative Cancer Research at MIT, studying the role of the cancer-causing gene Ras in the mouse colon. He teamed up with Lauffenburger and others to computationally model Ras' behavior in cell culture.

After Haigis moved to MGH, he and Lauffenburger decided to bring this computational approach to studying living animals because they believed that studies done in cultured cells could miss some of the critical factors that come into play in living systems, such as the location of a cell within a living tissue and the influence of cells that surround it.

In the new paper, the researchers tackled the complex interactions that produce inflammation in the mouse intestine. The intestine contains many types of cells, but they focused on epithelial cells (which line the intestinal tube) and their response to TNF.

Previous work has shown that TNF plays a central role in intestinal inflammation, and provokes one of two possible responses in the intestinal epithelial cells: cell death or cell proliferation. Chronic inflammation can lead to inflammatory bowel disease and potentially cancer.

In this study, the researchers got the data they needed to develop their computational model by treating normal mice with TNF, then determining whether the cells proliferated or died. They found that cell fate depended on the cells' location in the intestine — cells in the ileum proliferated, while those in the duodenum died.

The multi-faceted result would likely not have been seen in a lab dish. "In cell culture, you would have gotten one or the other," Lauffenburger says.

They also correlated the diverse outcomes with the activities of more than a dozen proteins found in the cells, allowing them to determine how the outcomes depended on quantitative combination of key signaling pathways, and furthermore, to predict how the outcomes would be affected by drug treatment. The researchers then tested the model's predictions in an additional cohort of mice, and found that they were accurate.

Jason Papin, assistant professor of biomedical engineering at the University of Virginia, says that the team's biggest accomplishment is demonstrating that systems biology modeling can be done in living animals (in vivo). "You always want to move to an in vivo setting, if possible, but it's technically more difficult," says Papin, who was not involved with this research.

The researchers are now trying to figure out in more detail what factors in the intestinal cells' environment influence the cells to behave the way they do. They are also studying how genetic mutations might alter the cells' responses.

They also plan to begin a study of neurological diseases such as Alzheimer's disease. Cancer is another disease that lends itself to this kind of modeling, says Jacks, who was not part of this study. Cancer is an extremely complicated disease that usually involves derangement of many cell signaling pathways involved in cell division, DNA repair and stress response.

"We expect that our ability to predict which targets, which drugs and which patients to bring together in the context of cancer treatment will require a deeper understanding of the complex signaling pathways that exist in cancer," says Jacks. "This approach will help us get there."