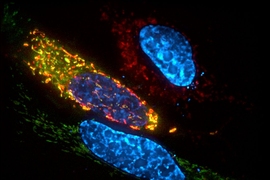 ↓ Download Image
Caption: To determine the location of ALKBH7 in cells, MIT researchers engineered these cells to express ALKBH7 bound to green fluorescent protein (GFP). The cells’ mitochondria express a red fluorescent protein. In cells where ALKBH7 is present in the mitochondria, the green and red signals mix and appear yellow.
Credits: Image: Jennifer Jordan and Dragony Fu

Caption:
To determine the location of ALKBH7 in cells, MIT researchers engineered these cells to express ALKBH7 bound to green fluorescent protein (GFP). The cells’ mitochondria express a red fluorescent protein. In cells where ALKBH7 is present in the mitochondria, the green and red signals mix and appear yellow.
Credits:
Image: Jennifer Jordan and Dragony Fu
When cells suffer too much DNA damage, they are usually forced to undergo programmed cell death, or apoptosis. However, cancer cells often ignore these signals, flourishing even after chemotherapy drugs have ravaged their DNA.

A new finding from MIT researchers may offer a way to overcome that resistance: The team has identified a key protein involved in an alternative death pathway known as programmed necrosis. Drugs that mimic the effects of this protein could push cancer cells that are resistant to apoptosis into necrosis instead.

While apoptosis is a tightly controlled procedure that breaks down and disposes of the dying cell in a very orderly way, necrosis is a messier process in which the cell’s membrane ruptures and its contents spill out.

“People really used to think of necrosis as cells just falling apart, that it wasn’t programmed and didn’t require gene products to make it happen,” says Leona Samson, a member of MIT’s Center for Environmental Health Sciences and Koch Institute for Integrative Cancer Research. “In the last few years it has become more clear that this is an active process that requires proteins to take place.”

In the May 10 online edition of the journal Genes and Development, Samson and colleagues report that a protein known as ALKBH7 plays a key role in controlling the programmed necrosis pathway. Dragony Fu, a former postdoc in Samson’s lab, is the paper’s lead author, and postdoc Jennifer Jordan is also an author.

ALKBH7 belongs to a family of proteins first discovered in E. coli about a dozen years ago as part of a DNA-repair mechanism. In humans, there are nine different ALKBH proteins, which Samson’s lab has been studying for several years.

Most of the mammalian ALKBH proteins appear to be involved in DNA repair, similar to the original E. coli version. In particular, they respond to DNA damage caused by alkylating agents. These agents can be found in pollutants such as fuel exhaust and tobacco smoke, and are also used to treat cancer.

In the new paper, Samson, a professor of biology and biological engineering, and her colleagues found that ALKBH7 has an unexpected effect. When the researchers lowered ALKBH7 levels in human cells grown in the lab, those cells were much more likely to survive DNA damage than cells with normal ALKBH7 levels. This suggests that ALKBH7 actually promotes cell death.

“That was a surprising finding, because previously all of these ALKBH proteins were shown to be helping the cell survive when exposed to damage,” says Fu, who is now a visiting research fellow at the University of Zurich.

Upon further investigation, the researchers found that when healthy cells suffer massive DNA damage from alkylating agents, they enter the programmed necrosis pathway. Necrosis, which can also be initiated by bacterial or viral infection, is believed to help the body’s immune system detect threats.

“When dying cells release their contents during necrosis, it serves as a warning signal for your body that there is a virus there and recruits macrophages and other immune cells to the area,” Fu says.

The findings suggest that when DNA is so badly harmed that cells can’t repair it, the programmed necrosis pathway kicks in to prevent cells with major genetic damage from potentially become cancerous.

Other researchers have shown that some types of cancer cells have much lower ALKBH7 levels than normal cells. This suggests that the cancer cells have gained the ability to evade programmed necrosis, helping them to survive, Fu says.

The necrosis pathway appears to be initiated by an enzyme called PARP, which becomes hyperactive following DNA damage and shuts down the cell’s production of two molecules that carry energy, ATP and NAD. The MIT team found that ALKBH7 prevents ATP and NAD levels from returning to normal by disrupting the function of mitochondria — the cell structures that generate energy for a cell.

Without an adequate supply of those critical energy-carrying molecules, the cell cannot survive and undergoes necrosis. In cells that lack ALKBH7, ATP and NAD levels rebound, and the cells survive, carrying a heavy burden of DNA damage.

The researchers are now investigating the molecular details of the programmed necrosis pathway in hopes of identifying ways to activate it in cancer cells.

“The observations reported in this paper open up the possibility that novel treatments could be developed to treat tumors that are relatively resistant to killing via the apoptotic pathway,” says Ashok Bhagwat, a professor of chemistry at Wayne State University who was not part of the research team.

The research was funded by the National Institutes of Health and the American Cancer Society.