Mappers, modelers and an anthropologist

Caption:
Tom Schilling
Credits:
Photo: Allegra Boverman
For an exploration geologist searching for mineral deposits, the mountainous terrain of northwestern British Columbia conceals potential payloads of copper and molybdenum. For a forestry scientist, the region’s pines are a valuable resource to be protected and harvested. For some 200 First Nations — Canada’s political term for groups of indigenous peoples — the land is their home and the place of their ancestors. 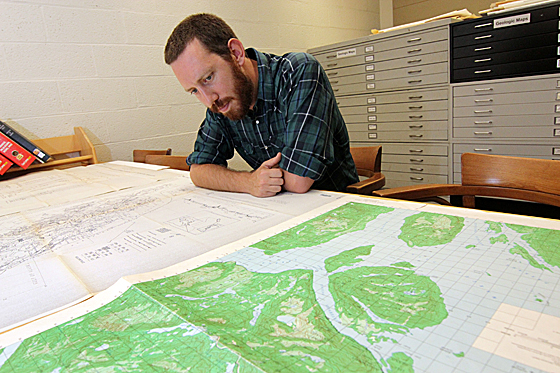 Schilling grew up in a former mining town in central Wyoming, a few miles from the Wind River Indian Reservation — an area that faced challenges similar to those he now sees in British Columbia. “From an early age, I saw what it meant to be part of a population that was chiefly working in resource-industry jobs,” Schilling says. “There were frequently tensions, but I was a bit oblivious to a lot of that politics when I was growing up.”

From his mother, a writer from the East Coast, and his father, an engineer from the West Coast, Schilling developed interests in both literature and science. As an MIT undergraduate double-majoring in materials science and engineering and literature, and then while pursing his master’s degree in materials science at the University of California at Berkeley, Schilling found himself drawn to anthropology. “The laboratory life wasn’t really the life for me; I was more interested in interviewing my classmates and seeing why they were doing what they were doing,” he says.

Now a PhD student in MIT’s program in History, Anthropology, and Science, Technology and Society (HASTS), Schilling has spent most of the past eight months doing anthropological fieldwork in the town of Smithers, in northwestern British Columbia. While scientists in the area seek to answer questions about trees and terrain, Schilling is interested in the scientists themselves and the tools they use — namely, maps and models of the region’s resources.

“British Columbia is 94 percent public land, which means public scientists have a really important role in terms of saying what happens to it,” Schilling says. “The political consequences of these kind of maps are immense.”

Maps of the future

Exploration geologists working for mining companies create geophysical maps depicting the probability of finding ore deposits in various locations throughout the region. “These kind of imaging technologies have consequences on a social level very quickly,” Schilling says. “Say you’re looking at a map of an area of rural British Columbia that shows something that looks like a deposit underneath a town. There may or may not be gold, but suddenly there’s going to be a bunch of drills to the ground.”

The regrowth-simulation models created by forestry scientists can have similarly drastic effects on local communities. “Forestry is by far the largest industry here; there’s a huge number of people that are dependent on forestry jobs,” Schilling says. However, large swaths of forest are being wiped out by a sweeping infestation of mountain pine beetles — the largest recorded insect infestation anywhere in the world.

“The main thing that I’m looking at here is how different scientists are approaching the future viability of the forest industry and what sort of responsibility they have as scientists for being able to predict how that’s going to play out,” Schilling says. “Everyone I talk to is not just a scientist; they’re also a political actor in a certain way.”

As rich as the province is in mineral and forest resources, it is equally rich in cultural history. Hundreds of First Nations, each with a distinct cultural identity and socioeconomic situation, are faced with the challenge of justifying their claim to the land that they never sold.

“The provincial government hasn’t made any treaties with most of these First Nations groups, so as far as they’re concerned, they still own the land. They haven’t signed anything that says that they don’t,” Schilling explains.

“The main tools First Nations folks use are maps of archaeologically significant sites and models of the likelihood of finding archaeologically significant sites in areas where there are proposed developments,” Schilling says. “The reason I want to call attention to the mapping and modeling strategies the First Nations groups are using is to show that this is what indigenous groups need to do in order to even have a seat at the table. They need to talk in this computer language to be taken seriously.”

Through his research, Schilling has come to recognize that the maps and models created by the geologists, forestry scientists and First Nations are more than just representations of the land: They are visions for its future.

“In one way or another, all these groups are trying to put their mark on the land and the future of the land,” Schilling says. “So it’s not just what’s happening right now, but it’s saying, this is what we want the land to look like a few decades from now."