Caption:
Speakers at the event offered moving testimonies of Officer Sean Collier's life and impact on his family, friends and members of the MIT community.
Credits:
Photo: M. Scott Brauer

Patricia Crosby, a financial assistant in MIT’s Department of Financial Accounting and Reporting, was one of many who arrived early to secure a seat.

“It’ll be a day that I’ll always remember,” said Crosby, who has worked at MIT for 24 years. “What brought us to this line was a tragedy. Things like this are not supposed to happen. We see it on TV and elsewhere, but here it is now, up close and personal, and it’s so surreal. We’re just here to lift up the family, hopefully, and pay our respects.” 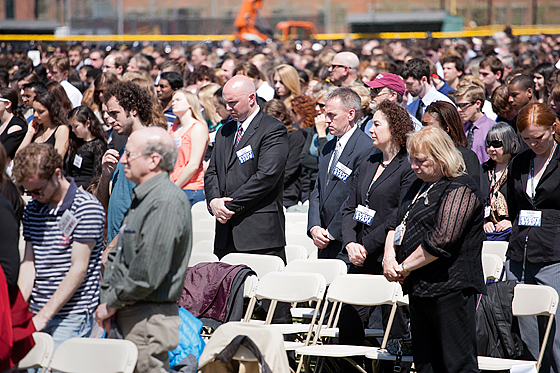 Others in line, such as Claude Muhinda, have observed a new sense of solidarity on campus in the wake of Collier’s death.

“You feel people being closer to you,” said Muhinda, a native Rwandan who now works in MIT’s Division of Student Life. “I was so touched, especially being far from home. … It’s like a community, and we have to stay stronger together. I have hope.”

MIT canceled classes for the day, and thousands of students came out to attend Collier’s memorial service, including senior Anna Merrifield.

“We all kind of felt the fear involved this week, and it’s kind of nice to come full circle and celebrate someone’s life who really did protect our campus and protect all of us,” Merrifield said.

“For an officer to put his life on the line for the sake of MIT students is something I never thought would happen,” senior Hana Khalil said. “Now it did, and now you think twice about it.”

Fellow senior Aparna Sud came bearing a bouquet of flowers, which she hoped to lay after the ceremony at a still-growing memorial to Collier at the site near the Stata Center where he was shot last Thursday evening.

“The MIT police are such a supportive network,” Sud said. “I’ve gotten to know some of them personally, and they’re always friendly, always upbeat, and a lot of times it goes unnoticed how much of a difference they make in our everyday life. They’re such an important part of how safe we are on campus, and they’re such great people on top of that, that it’s really nice to see the community come together in a moment like this.”

Alex Slocum, a professor of mechanical engineering, chose to wear his respect on his sleeves — literally. Slocum, who is known on campus for sporting Hawaiian shirts, wore one in honor of Collier in the colors of the American flag — a shirt that his grandmother made for him when he was 16.

“I’ve been here since 1978, and on several occasions, campus police officers have kept [me] from getting beaten up late at night,” Slocum recalled. “We live in a big city, and I’ve always been appreciative of them. … Now here is a person who gave his life, literally, in service to the community.”

Slocum’s son Jonathan, a junior studying mechanical engineering, was in his East Campus dorm room last Thursday evening at 10:30, some 200 meters from where Collier was shot. He heard the gunfire, and like many students, thought at first that the sounds were relatively harmless. Slocum says the events over the past week have given him a new appreciation for campus police — in particular, their connections with students.

“Sometimes you see a cop and they’re really stony-faced and don’t want to talk to you because they’re doing their job,” Slocum said. “But some of these guys, they know the students. They’re part of the community … you take the job to get to know the students.”

Junior Christian Reed, a member of Army ROTC, attended the ceremony in uniform to pay his respects to Collier, as well as to the thousands of law enforcement officials who arrived from various parts of the country.

“It really is an awe-inspiring event, seeing thousands of police officers, FBI, ATF, and we saw a couple of army officers walking in here, so we wanted to show our support and respect,” Reed said. “[This week] kind of reaffirms my commitment to the Army and America in general. This puts things in perspective that what we’re doing is a good purpose and serving a greater being than ourselves.”