Purification on the cheap 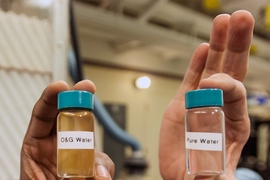 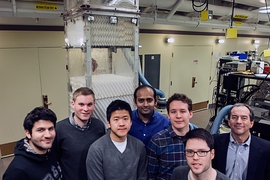 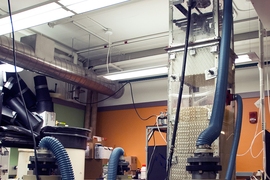 ↓ Download Image
Caption: This 12-foot-high system in a lab at MIT has demonstrated the principles of the new humidification-dehumidification system.
Credits: Photo: David Castro-Olmedo/MIT

Caption:
Water from actual natural gas wells, sent to MIT by the companies that operate them, was run through the system, producing clean, potable water.
Credits:
Photo: David Castro-Olmedo/MIT

Increased natural gas production is seen as a crucial step away from the greenhouse gas emissions of coal plants and toward U.S. energy independence. But natural gas wells have problems: Large volumes of deep water, often heavily laden with salts and minerals, flow out along with the gas. That so-called “produced water” must be disposed of, or cleaned.

Now, a process developed by engineers at MIT could solve the problem and produce clean water at relatively low cost. After further development, the process could also lead to inexpensive, efficient desalination plants for communities in the developing world, the researchers say.

The new technology is described in a series of papers recently published in three journals: the International Journal of Heat and Mass Transfer, Applied Energy and the American Institute of Chemical Engineers’ AIChE Journal. The research is the work of a team including MIT postdoc Prakash Narayan, mechanical engineering professor John H. Lienhard V, and collaborators at King Fahd University of Petroleum and Minerals (KFUPM) in Saudi Arabia.

The method is a variation of the standard distillation process, in which salty water is vaporized and then condenses on a cold surface; the salt separates out during evaporation. But this process is energy-intensive — and therefore costly — because all the water must be heated to the boiling point, while the condensing surfaces must be kept cold.

In the new process, water well below the boiling point is vaporized by direct contact with a carrier gas; the moist air is subsequently bubbled through cooler water where the purified vapor condenses. But the temperature difference between the warm and cool water is much less than in conventional dehumidifiers, and the surface area provided by the small bubbles is much greater than that of a flat condenser surface, leading to a more efficient process.

The traditional version of this process is called a humidification dehumidification (HDH) desalination system. While other groups have designed HDH systems, this new version requires far less energy than previous systems, the team says.

Lienhard says, “We became interested in the HDH process at the start of our collaboration with KFUPM as a means of providing water to off-grid regions of the developing world. Both the MIT and the KFUPM faculty wanted to develop a technology that might benefit people all over the world.”

At the beginning of his doctoral thesis research, Narayan was focused, he says, on ways “to increase energy efficiency and thermal efficiency, and to reduce size and cost” for desalination plants. Such facilities are a critical need in parts of the developing world — such as in southern India — that have limited fresh water but abundant seawater.

Conventional distillation plants have efficiencies of scale — the bigger they are, the more cost-effective — but for the HDH system, the optimum size is a plant that produces about 1,200 to 2,400 liters of clean water a day, about the capacity needed for a rural village. Such plants can easily be made larger simply by adding more modules, he says.

Lienhard notes that the HDH technology had not previously been the target of systematic analysis: “Over a period of years, our group developed new thermodynamic methods for assessment of these cycles, followed by a deep understanding of the causes of energy inefficiency in them. Eventually, this led us to the new configurations and components that are described in these latest publications.”

The researchers have already filed for patents on the system, and the team has set up a company to commercialize the process in collaboration with another MIT group that has been pursuing a related system for desalination. While Narayan says the team’s ultimate goal is desalination in developing countries, it turns out that the system is especially well suited for treating the produced water that comes from natural gas wells.

The water and other fluids used to open wells through hydraulic fracturing — also known as fracking — are a somewhat different matter, requiring other kinds of treatment and disposal. But a much bigger issue for the operators of these wells is the ongoing treatment of produced water, which represents a significant expense. This water is typically several times saltier than seawater, which makes it a particularly good candidate for treatment with the HDH process, Narayan says: Unlike membrane-based desalination systems, this system’s efficiency is unaffected by saltier water. In fact, he adds, “The biggest advantage is when you deal with high salinity.”

The MIT team built a 12-foot-high test unit, in the Rohsenow Kendall Heat Transfer Laboratory at MIT, that has run continuously for weeks, producing about 700 liters of clean water a day. They have tested it using barrels of water from natural gas wells to demonstrate that it produces water clean enough to drink.

Their next step is to scale up to a plant about two to three times the size of this initial unit, which calculations show should be an optimal size. Narayan says he expects the first commercial plants could be in operation within about two years.

Leon Awerbuch, dean of the IDA Desalination Academy in Winchester, Mass., says, “This is very unique research work leading to a much higher-efficiency solution than conventional HDH, and could have significant impact in desalination for small and medium systems.”

“It is extremely encouraging that the system developed is able to concentrate and recover water from very highly saline solution, like produced water,” Awerbuch adds. Because of this, he says, it “could be of critical importance to the booming shale-gas industry.”

The authors of these recent papers also included recent MIT graduates Steven Lam and Maximus St. John; MIT graduate students Karim Chehayeb, Ronan McGovern and Gregory Thiel; and professors Mostafa H. Sharqawy and Syed M. Zubair of KFUPM and Sarit K. Das of the Indian Institute of Technology. The work was supported by KFUPM through the Center for Clean Water and Clean Energy at MIT and KFUPM.