Special deal on photon-to-electron conversion: Two for one! 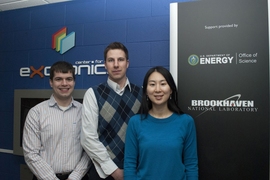 Credits:
Illustration: Christine Daniloff/MIT
Throughout decades of research on solar cells, one formula has been considered an absolute limit to the efficiency of such devices in converting sunlight into electricity: Called the Shockley-Queisser efficiency limit, it posits that the ultimate conversion efficiency can never exceed 34 percent for a single optimized semiconductor junction.

Now, researchers at MIT have shown that there is a way to blow past that limit as easily as today’s jet fighters zoom through the sound barrier — which was also once seen as an ultimate limit.

The principle behind the barrier-busting technique has been known theoretically since the 1960s, says Baldo, a professor of electrical engineering at MIT. But it was a somewhat obscure idea that nobody had succeeded in putting into practice. The MIT team was able, for the first time, to perform a successful “proof of principle” of the idea, which is known as singlet exciton fission. (An exciton is the excited state of a molecule after absorbing energy from a photon.)

In a standard photovoltaic (PV) cell, each photon knocks loose exactly one electron inside the PV material. That loose electron then can be harnessed through wires to provide an electrical current.

But in the new technique, each photon can instead knock two electrons loose. This makes the process much more efficient: In a standard cell, any excess energy carried by a photon is wasted as heat, whereas in the new system the extra energy goes into producing two electrons instead of one.

While others have previously “split” a photon’s energy, they have done so using ultraviolet light, a relatively minor component of sunlight at Earth’s surface. The new work represents the first time this feat has been accomplished with visible light, laying a pathway for practical applications in solar PV panels.

This was accomplished using an organic compound called pentacene in an organic solar cell. While that material’s ability to produce two excitons from one photon had been known, nobody had previously been able to incorporate it within a PV device that generated more than one electron per photon.

“Our whole project was directed at showing that this splitting process was effective,” says Baldo, who is also the director of the Center for Excitonics, sponsored by the U.S. Department of Energy. “We showed that we could get through that barrier.”

The theoretical basis for this work was laid long ago, says Congreve, but nobody had been able to realize it in a real, functioning system. “In this system,” he says, “everyone knew you could, they were just waiting for someone to do it.”

“This is the landmark event we had all been waiting to see,” adds Richard Friend, the Cavendish Professor of Physics at the University of Cambridge, who was not involved in this research. “This is really great research.”

Since this was just a first proof of principle, the team has not yet optimized the energy-conversion efficiency of the system, which remains less than 2 percent. But ratcheting up that efficiency through further optimization should be a straightforward process, the researchers say. “There appears to be no fundamental barrier,” Thompson says.

While today’s commercial solar panels typically have an efficiency of at most 25 percent, a silicon solar cell harnessing singlet fission should make it feasible to achieve efficiency of more than 30 percent, Baldo says — a huge leap in a field typically marked by slow, incremental progress. In solar cell research, he notes, people are striving “for an increase of a tenth of a percent.”

Solar panel efficiencies can also be improved by stacking different solar cells together, but combining solar cells is expensive with conventional solar-cell materials. The new technology instead promises to work as an inexpensive coating on solar cells.

The work made use of a known material, but the team is now exploring new materials that might perform the same trick even better. “The field is working on materials that were chanced upon,” Baldo says — but now that the principles are better understood, researchers can begin exploring possible alternatives in a more systematic way.

Christopher Bardeen, a professor of chemistry at the University of California at Riverside who was not involved in this research, calls this work “very important” and says the process used by the MIT team “represents a first step towards incorporating an exotic photophysical process (fission) into a real device. This achievement will help convince workers in the field that this process has real potential for boosting organic solar cell efficiencies by 25 percent or more.”

The research was performed in the Center for Excitonics and supported by the U.S. Department of Energy. MIT has filed for a provisional patent on the technology.