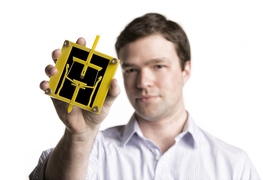 Begg, a PhD candidate in the Department of Mechanical Engineering, first became interested in medical device engineering during junior high school after studying surgical robots and realizing their profound impact on human health. Today, he works with doctors and nurses across medical disciplines in hospitals throughout Boston, to better understand how he can have a positive influence on medicine.

“Nikolai has a true appreciation for the importance of living a problem,” said Alexander Slocum, Begg’s advisor and the Neil and Jane Pappalardo Professor of Mechanical Engineering at MIT. “In a field where the end user is often difficult to reach, Nikolai is frequently invited into operating rooms after exciting a passion in physicians who can see that he is motivated only by the opportunity to create something that will transform the way they work.”

Read the full press release from the Lemelson-MIT Program