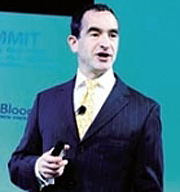 This article first appeared in the Autumn 2012 issue of Energy Futures, the magazine of the MIT Energy Initiative. Subscribe today.

Michael Liebreich launched Bloomberg New Energy Finance in 2004 to provide analysis and advice on emerging energy technologies and related sectors to utilities, oil, gas, and renewable companies, as well as governments. He sold it to financial information giant Bloomberg in 2009.

Liebreich discussed his take on new energy markets, which currently face major challenges, during a visit to the MIT Energy Initiative’s 2012 research conference.

Q. Your background includes a degree in thermodynamics from Cambridge University, an MBA from Harvard, experience as an entrepreneur and as a media executive. How did you arrive at new energy?

A. I got fairly badly burned by the tech boom-bust cycle around the turn of the millennium. Rather than bounce back and try to win Web 2.0, I returned to my roots, which were in energy. I happened to know about databases, modern control technology and the Internet, as well as nanotech and biotech, because I had been in venture capital for a while. I felt we were going to build the smart grid, not specifically because it helps with electric vehicles or energy efficiency, but because that’s just how you’ll monitor the condition of the electrical system from generator to user. And it was just obvious that we would eventually switch to cleaner technologies as their costs come down. That’s where I came from.

Q. How has the financing landscape for new energy technologies changed since you began monitoring the scene?

A. It’s gone through a number of phases. When I started in 2004, there were only a few idealists wearing suits, some family offices, some visionaries, and an extraordinary level of ignorance about energy technology in the financial community. By 2006, professional venture capitalists, bankers, infrastructure finance people, project financiers, were beginning to pay serious attention. And then in 2007, an enormous amount of money started pouring in. Every asset manager had to have a clean-tech fund, a clean energy fund, a climate fund.

Valuations went up by factors of four and five. It was irrational, it was ridiculous. And then it was hit hard by the crash.

After that came the “green stimulus” years, 2009–2011. The sector was on a sort of artificial life support, so the amount of investment globally continued to rise. But those years have come to an end, and we’ve arrived at a cold, hard reality. It’s a tough time. What’s sustaining the industry now is the fact that its economics are finally coming good. Contrast 2005 to now: The cost of solar photovoltaics is down by a factor of nearly five. We’re now in an environment where these technologies are within spitting distance of being competitive without subsidies.

Q. Does it seem paradoxical that as these technologies become increasingly competitive, and global investment in them has increased from $50 billion in 2004 to $280 billion in 2011, we are also seeing new energy firms struggling to secure capital and even going under?

A. All those asset managers who poured in during 2007–08, now they’re all pouring out, saying clean-tech and clean energy is over, selling everything they own. The capital markets don’t differentiate between technology providers, where there is overcapacity, and technology buyers, getting the advantage of cheap equipment. They are just punishing everyone indiscriminately. Investors are herd animals.

You hear nonsense statistics in political debates on the failure of clean energy companies receiving loan guarantees. Sure, some of the manufacturers supported by the stimulus funds have gone bust. But nobody on the asset build-out side has gone bust. These projects, once they’re built, perform well, they become good assets.

Q. So what kind of setback does the current market represent?

A. Go back to 1903. There were 500 car companies in the US. By the 1970s, there were essentially three. Some went out of business, some were poorly run, some were acquired and their shareholders did OK. But the car itself was never a stupid idea, and the industry grew. Investors who overreact now should realize that the energy industry is capital intensive, heavily regulated, and it is a difficult space to go from naught to 100 miles per hour quickly. It will go through cycles. This is a tough stage in the cycle.

A lot of things are ugly at the moment, but if we look at them one by one, most will resolve in the next few years, particularly production overcapacity. There will be some failed technologies. People will shut down uncompetitive lines. With the expiry of the production tax credit, there will be more bankruptcies. But the number of megawatts of wind and solar will increase. Clean energy is not a shrinking industry, it is a consolidating industry. It is not going away.

Q. How does politics affect the situation?

A. The European crisis has crushed the sector’s most important geographic market. How are you going to invest in European projects when there is a question mark over the survival of the Euro? The average commercial bank cannot fund a project in a high-risk country like Spain, Greece, or Portugal, the best countries in Europe for clean energy. But at some point this will resolve: There will be an end to the European pain.

In the US, pre-election uncertainty proved much more corrosive than any of the anti-clean energy statements heard during the presidential campaign. At the end of the day, if clean energy economics are attractive, whoever wins the election will support the industry in some way: perhaps more funding for research, perhaps more for deployment. Or just leave it alone and not create uncertainty.

Q. What’s next for new energy?

A. Technologies continue becoming cost-competitive, whether on- or offshore wind, solar, LEDs or batteries. The technologies needed to integrate clean energy into the grid also keep becoming cheaper. Engineers are really, really smart and have got the bit between their teeth. They will come up with solutions and drive costs down.

But in addition to R&D breakthroughs, you need to get technologies out into the market, scale and build a supply chain, and then familiarize financiers with them. You need smart government policies to help break down barriers to market integration—almost more than you need any other sort of support.

Q. What part will clean energy play in the economy?

A. We’re now in a world of perennially high resource and energy prices. Natural gas is currently very cheap in the US because the economy slowed just when shale gas came along. But don’t get too used to it—the price will soon be up to where it is no cheaper than onshore wind power. America must create a resource-efficient economy. Renewable energy, together with the smart grid, electric vehicles, and power storage, will be a big part of it, along with gas. If the US lags, it risks ending up buying these technologies from other countries, the way it has ended up dependent on imported oil. Imagine if the revenue from Amazon, Google, and Facebook flowed to Japan and China instead of to the US economy. That’s the worry, that US companies won’t own the next generation of energy technologies. The next Exxon could be Chinese or Korean.

Q. You privately serve in groups addressing climate change issues, and you executive-produced a short advocacy film, "First They Ignore You". Is it difficult to balance your professional and personal interest in new energy?

A. At Bloomberg, we provide facts and data for utilities, governments, and corporations, giving them information on risks and options. Grown-up decision-makers need investment-grade information.

I don’t see the film I made as advocacy. Cold, hard analysis shows the cost of clean energy coming down and the cost of conventional energy going up. The inevitable conclusion is that at some point there will be a phase change, and clean energy will be the norm, not the exception. The film was me experimenting with saying the same thing in images, rather than with a PowerPoint presentation.

It is pretty clear as a society we have a choice: We can either invest our money, time, brains and our brightest students in maintaining the existing energy system, which gets more and more expensive, or we can make the decision to invest in other approaches. I don’t feel like an advocate for trying to point this out.