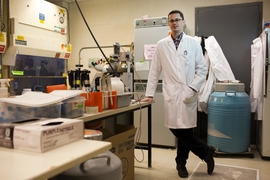 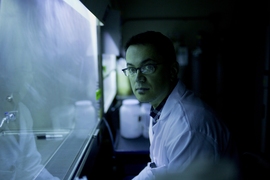 Caption:
Luiz Godoy
Credits:
Photo: M. Scott Brauer
Nitric oxide (NO), a gas with many biological functions in healthy cells, can also help some cancer cells survive chemotherapy. A new study from MIT reveals one way in which this resistance may arise, and raises the possibility of weakening cancer cells by cutting off their supply of NO.

The findings, presented today at the annual meeting of the American Association for Cancer Research, focus on melanoma — a cancer that is difficult to treat, especially in its later stages. The prognosis is generally worse for patients whose tumors have high levels of NO, says Luiz Godoy, an MIT research associate and lead author of the study. 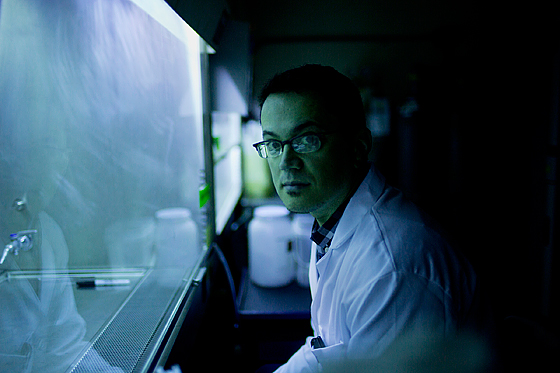 Godoy and his colleagues have unraveled the mechanism behind melanoma’s resistance to cisplatin, a commonly used chemotherapy drug, and, in ongoing studies, have found that cisplatin treatment also increases NO levels in breast and colon cancers.

“This could be a mechanism that is widely shared in different cancers, and if you use the drugs that are already used to treat cancer, along with other drugs that could scavenge or decrease the production of NO, you may have a synergistic effect,” says Godoy, who works in the lab of Gerald Wogan, an MIT professor emeritus of biological engineering and senior author of the study.

NO has many roles within living cells. At low concentrations, it helps regulate processes such as cell death and muscle contraction. NO, which is a free radical, is also important for immune-system function. Immune cells, such as macrophages, produce large amounts of NO during infection, helping to kill invading microbes by damaging their DNA or other cell components.

“It’s really a molecule that has a dual effect,” Godoy says. “At low concentrations it can act as a signaling molecule, while high concentrations will be toxic.”

In the new study, the researchers treated melanoma cells grown in the lab with drugs that capture NO before it can act. They then treated the cells with cisplatin and tracked cell-death rates. The NO-depleted cells became much more sensitive to the drug, confirming earlier findings.

The MIT team then went a step further, investigating how NO confers its survival benefits. It was already known that NO can alter protein function through a process known as S-nitrosation, which involves attaching NO to the target protein. S-nitrosation can affect many proteins, but in this study the researchers focused on two that are strongly linked with cell death and survival, known as caspase-3 and PHD2.

The role of caspase-3 is to stimulate cell suicide, under the appropriate conditions, but adding NO to the protein deactivates it. This prevents the cell from dying even when treated with cisplatin, a drug that produces massive DNA damage.

PHD2 is also involved in cell death; its role is to help break down another protein called HIF-1 alpha, which is a pro-survival protein. When NO inactivates PHD2, HIF-1 alpha stays intact and keeps the cell alive.

“Now we have a mechanistic link between nitric oxide and the increased aggressiveness of melanoma,” says Douglas Thomas, an assistant professor of medicinal chemistry and pharmacognosy at the University of Illinois at Chicago, who was not part of the research team. “It certainly would be worth exploring whether this mechanism is also present in different tumor types as well.”

The MIT researchers also found in some cancer cells, NO levels were five times higher than normal following cisplatin treatment. Godoy is now investigating how cisplatin stimulates that NO boost, and is also looking for other proteins that NO may be targeting.

Researchers in Wogan’s lab also plan to start testing cisplatin in combination with drugs that block NO production in animals.

The research was funded by the National Cancer Institute and the National Institute of Environmental Health Sciences. The research team also published its findings in a November 2012 article in the Proceedings of the National Academy of Sciences. Other authors of that paper were graduate student Chase Anderson, postdoc Rajdeep Chowdhury and technical associate Laura Trudel.