Caption:
MIT biologist Michael Laub
Credits:
Photo: M. Scott Brauer
Bacteria encounter a constant barrage of ever-changing temperature, acidity and chemical stimuli from their environment. The cells must absorb all of this information and choose the correct response — whether boosting their metabolism, reproducing themselves or counteracting the effects of a toxin.

MIT biologist Michael Laub has dedicated his research to figuring out how cells interpret and respond to this cacophony of information so precisely. “That’s the classic problem I’m most interested in: How do cells regulate their own behavior?” says Laub, an associate professor of biology. 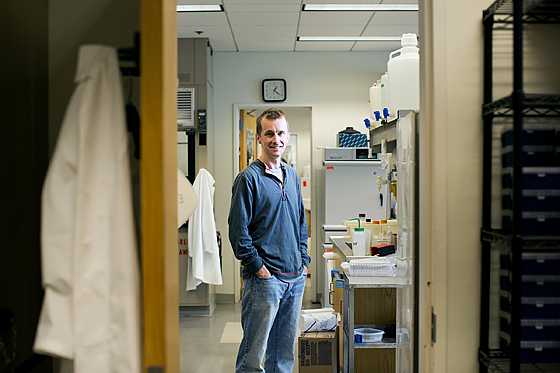 To answer that question, Laub and his students methodically probe the interactions of pairs of signaling proteins in bacteria. Their work not only illuminates the complex behavior of bacterial cells, but also sheds light on how such complexity evolved in bacteria and other organisms, starting from just a few basic building blocks. Recently they were able to piece together the mechanism that gives rise to many different cell-signaling pathways through duplication and modification of one original pathway.

“Biology is very poor at coming up with brand-new ways of doing things. Biological systems are just much better about taking existing pathways and making changes to them — mixing and matching things, or tweaking things a little bit and generating diversity and novel functions from a limited set of foundational materials,” Laub says.

Born in Canada but raised near Santa Barbara, Calif., Laub became interested in biology at an early age, inspired by a high school biology teacher. He was also heavily influenced by a professor of physical chemistry at the University of California at Santa Barbara, where he did research through a summer program for high school students.

That professor, Vojislav Srdanov, was studying buckyballs — spherical, cagelike molecules made of carbon. “He had a lot of passion for doing experiments, not just reading about science in textbooks,” Laub recalls. “There was a certain excitement to just being in the lab that I was really captivated by. He had this very infectious passion for research that really rubbed off on me.”

Laub went on to study biology at the University of California at San Diego (UCSD). He also took a lot of math classes, and thought about following in the footsteps of his mathematician father. “I initially thought I might want to go in that direction or do some kind of combination of math and biology, but the draw to doing experiments and being at the lab bench eventually won out,” he says. “I liked math, but it wasn’t my lifelong passion the way biology became.”

At UCSD, he also discovered another lifelong passion — ultimate Frisbee. When it came time to choose a graduate school, Laub found himself drawn to Stanford University, for two reasons: One, the Stanford Cardinal consistently defeated his UCSD team. Two, some of the hottest new technology in biology was being developed at Stanford.

“It was the best of both worlds for me. It was great science, and it was great Frisbee,” Laub says.

As a graduate student, Laub helped to develop some of the first microarrays — glass or silicon surfaces containing thousands of DNA probes, which can be used to detect whether a particular gene is present in a cell sample. “I was originally driven more by new technologies than I was by big scientific questions, in some sense. And I was really excited about microarrays. It seemed like a game-changing technology,” he says.

Microarrays were key to ushering in the new field of genomics, which relies on such arrays for rapid, large-scale studies of gene expression. At Stanford, Laub used his microarrays to identify which genes were turned on and off at specific points in the cell-division cycle in the bacterium Caulobacter crescentus.

From Stanford, Laub went to Harvard University, where he held a Bauer Fellowship and ran his own small lab. There, he began studying the factors that regulate all of the gene-expression patterns that he had discovered as a graduate student. In particular, he focused on a class of proteins known as two-component signal-transduction proteins. These are enzymes, known as kinases, that span the cell’s membrane and respond to external signals from the environment.

When those signals are received, the kinases activate specific transcription factors, which then control the genes necessary for the cell’s response.

“These two-component signaling pathways are basically present in every bacterium on the planet, and most bacteria have dozens or hundreds of these things,” Laub says.

After arriving at MIT in 2006, Laub’s work split into two main areas of focus; one was further pursuing the role of two-component signaling proteins in cell division in Caulobacter crescentus. “We wanted to understand all about how [bacteria] orchestrate this complicated event of DNA replication and cell division and everything that goes along with the cell cycle,” Laub says.

His other branch of research involves looking more generally at two-component signaling proteins and how the kinases interact with the correct transcription factors.

“These kinases are exquisitely specific for certain transcription factors, and there’s not a lot of crosstalk between different members of these pathways,” Laub says. “We wanted to figure out, at a very detailed molecular level, how a given kinase, when it gets activated, can discriminate the right transcription factor from all other possible substrates. How does it do the right thing and avoid talking to all the wrong things?”

In 2008, Laub and his students published a paper in which they identified the key amino-acid sequences that control interactions between the kinase proteins and their transcription-factor partners. They also found that those amino acids evolve together as the functions of the proteins change.

Although his research focuses on bacteria, similar phenomena occur in all types of organisms, Laub says. “The nice thing about bacteria is that it’s a simpler and more tractable system to really figure this out at a very detailed molecular level.”